KEARNEY – A “whirlwind of emotions.”

That’s how Blake Bubak described his mindset Aug. 30 as the University of Nebraska at Kearney football team prepared to open its season against Missouri Southern State University.

“I was nervous, that’s for sure,” Bubak said. “I was also excited – really excited.”

The 5-foot-9, 175-pound defensive back had been thinking about this moment for the past year. It was his first collegiate football game, a dominating 45-0 victory for the Lopers in which Bubak recorded five tackles and forced a fumble on a punt return, earning him special teams player of the game honors from the UNK coaching staff.

The feeling from that night – playing in front of more than 6,000 fans and a “crazy” student section in the north end zone at Ron and Carol Cope Stadium – was “unmatched,” according to Bubak.

The experience was well worth the wait.

It had been nearly four years since Bubak appeared in a non-exhibition game, a 40-0 loss that ended his Columbus High School career. He still remembers all the details from that unseasonably cold Halloween night in 2014 when the Discoverers fell to Grand Island in the first round of the Class A state playoffs.

Bubak finished the season with five interceptions, two fumble recoveries and a school-record 160 tackles while adding 34 receptions for 425 yards and three touchdowns on offense.

Three months later, he committed to the South Dakota State University football team as a preferred walk-on, unknowingly starting a journey that would take him to three different schools over the next three years.

Bubak, a two-sport standout at Columbus High who excelled in football and baseball, never made it to Brookings, South Dakota.

Although he loves football, during the spring and summer he was a “die-hard baseball guy.” When people asked him to pick a favorite sport, they got this answer: “It depends on what season I’m in.”

“That’s a question I always struggled with,” Bubak said.

After playing his senior season for the Columbus High baseball team then finishing his American Legion career with a trip to the Class A state tournament that summer, Bubak was having so much fun he decided to give college baseball a try. He contacted former UNK head coach Damon Day and headed to Kearney instead of SDSU.

Bubak, a pitcher and outfielder for Columbus High who set the school records for triples in a season (7) and career (11) and shared the career mark for steals (15), didn’t find what he was looking for at UNK the first time around.

“The game just didn’t seem fun anymore,” said Bubak, who left UNK after one semester and joined the SDSU football team as a walk-on.

That stint also lasted just one semester and Bubak was back in his hometown of Columbus by summer 2016.

He took a break from sports to re-evaluate his future, enjoy college and spend some time “being a kid.” Bubak enrolled at the University of Nebraska-Lincoln and reconnected with some friends from Columbus, but he wasn’t getting the college experience he desired. He wanted to meet new people and get involved on campus, something that wasn’t happening in Lincoln.

His final leap of faith came in January 2017, when Bubak returned to UNK and asked the coaches if he could join the Loper football team.

“Now I’m here and I’m loving it,” he said. “On paper, it looks weird transferring schools that many times, but when I came back here it was probably the best choice I’ve ever made.”

Bubak played in the 2017 spring game, recording five tackles, one sack and a pass breakup, then learned NCAA transfer rules would require him to sit out the regular season.

As a member of the scout team, Bubak earned the defensive “iron man” award for his work ethic.

“It was a good experience to be on the scout team,” he said. “I think it definitely helped me work on the things I needed to work on and helped me get better.”

Bubak tied for the team lead with eight tackles in the 2018 spring game, forced a fumble and recorded one pass breakup. He was more than ready for last month’s season opener.

“At the end of the day, I just had to trust myself and know that I was prepared,” he said. “I knew that even if I made a mistake, I was going to make a mistake at 100 miles per hour.”

The starting defensive back followed that performance with four tackles, including one for a loss, in the Lopers’ 31-27 road victory Sept. 6 over the University of Central Oklahoma. That win gave UNK its first 2-0 start since 2011.

Bubak, who was awarded a partial scholarship over the summer, finally feels comfortable about his future.

“We’ve definitely come a long way since I got here,” Bubak said. “I’m really optimistic, and I know a lot of the guys on the team are, that we can definitely have a better year – a lot better year – than years past. In the offseason, guys were working really hard to achieve that goal and I think we’re still working really hard to achieve that goal.”

The 21-year-old recreation, park and tourism management major is a senior academically, but he’s eligible for two more seasons on the football field after 2018. He would need to add a minor or second degree to continue playing in 2020.

“I definitely have options,” Bubak said.

After a long journey to this point, Bubak knows he can trust his decision-making and instinct, both on and off the football field.

“That gut feeling eventually led me back to where I am now,” he said. 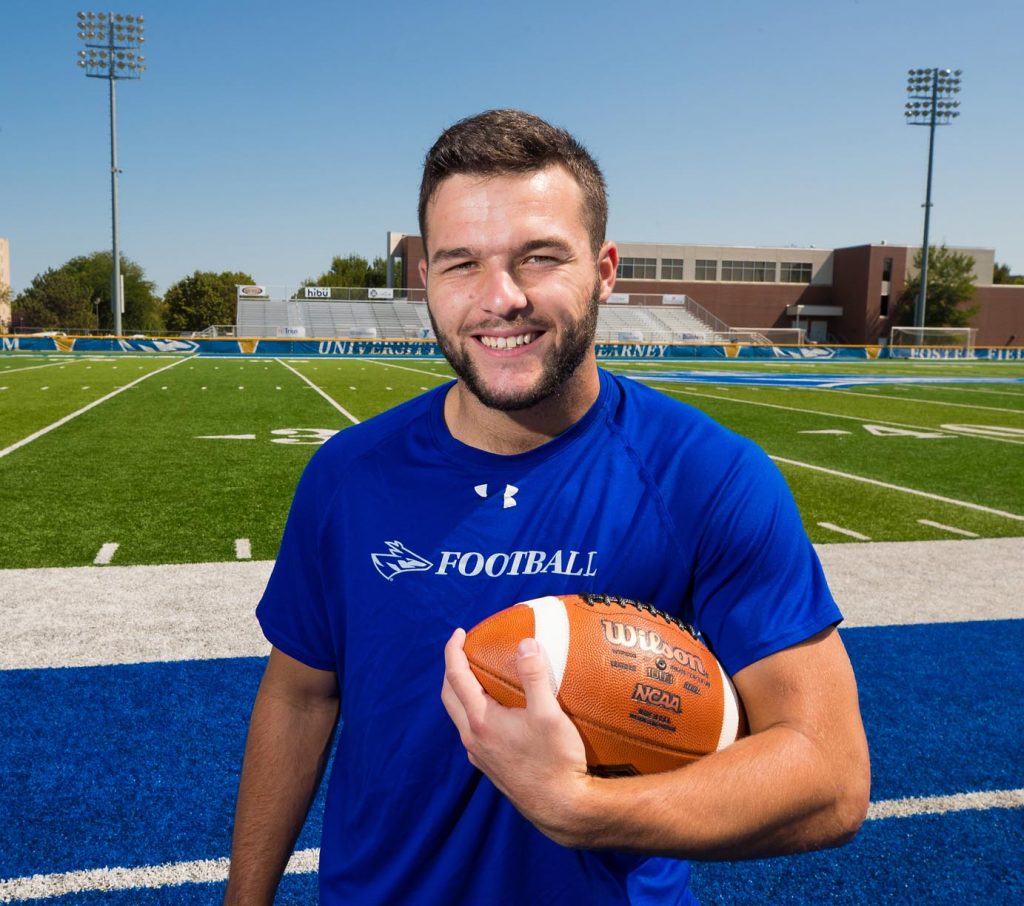