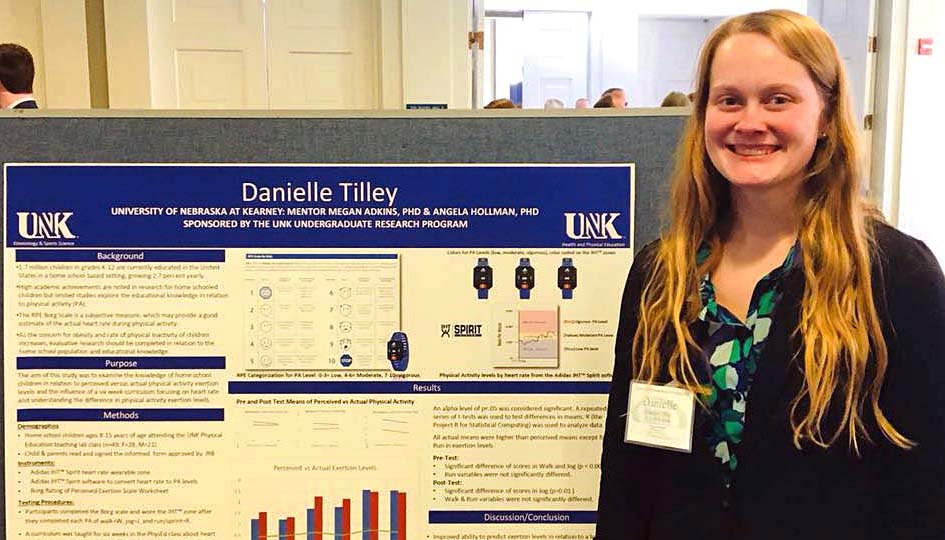 WASHINGTON – University of Nebraska at Kearney student Danielle Tilley was recently named one of 60 winners in the national “Posters on the Hill” contest sponsored by the Council on Undergraduate Research.

Her research project demonstrated how physical education heart rate technology gave home-schooled students a more accurate picture of their fitness by showing the differences between their perceived and actual exertion levels.

Tilley, a senior from Columbus, earned a trip to Washington, D.C., where her project was selected as a winner from more than 400 submissions. Of the winning entries, only three posters focused on education, and only Tilley studied physical education.

She’s the first health and physical education major from UNK to be selected for the event, which gives students the opportunity to showcase their research to congressional members, meet with their representatives and learn about advocacy for undergraduate research.

Tilley presented her research project during an April 18 ceremony in the Rayburn House Office Building. Her research demonstrated the difference Kearney-area home-school students saw in their actual effort levels compared to their perceived effort levels during a weekly physical education class held at UNK.

For her research, Tilley developed a six-week curriculum for the home-school students that included:

Tilley said the students’ initial perceptions were predictable, especially during the walk and sprint portions of the fitness testing. During the jogging portion, students perceived that their exercise intensity was greater than the heart rate data showed.

After six weeks, students left with a better understanding of their actual exertion levels, as well as the realization that fitness requires more than attending a weekly PE class.

“If they aren’t exercising outside of that, then they aren’t really exercising at all,” Tilley said. “That might affect their perception. They might not know much about their body or heart rate.”

Tilley, who is on track to graduate next year after she completes her student-teaching requirement, wants to make her mark as a PE teacher.

“That’s my biggest thing as a teacher/educator,” Tilley said. “I want to make an impact. I want everyone to find a lifetime activity that they’ll stick with so they can remain physically active for the rest of their lives.”

While in Washington, Tilley and Adkins met with U.S. Rep. Adrian Smith, who joined them to speak in detail about the project and home-schoolers in Kearney.