KEARNEY – Richard and Barbara Bush were all but certain their children would attend the University of Nebraska-Lincoln.

They both graduated from the school – he in 1953 and she in 1955 – and Barbara was even named homecoming queen.

At least that’s what they thought before settling in Kearney shortly after Richard graduated from the University of Nebraska Medical Center College of Dentistry in 1959.

“We made a wise choice when we came here and set up our dental practices,” Richard said. “It’s been very good for us. Kearney has been wonderful.”

The same can be said about the University of Nebraska at Kearney.

The Bushes watched the school transform, changing its name from the Nebraska State Teachers College at Kearney to Kearney State College before becoming a university in 1991.

The growing school ended up being the right fit for their three children, Beth Ann, Steve and Mark, who all attended UNK.

“It’s important to us,” Barbara said of UNK, which recognized the Bushes during Friday’s commencement ceremony with the Ron and Carol Cope Cornerstone of Excellence Award. 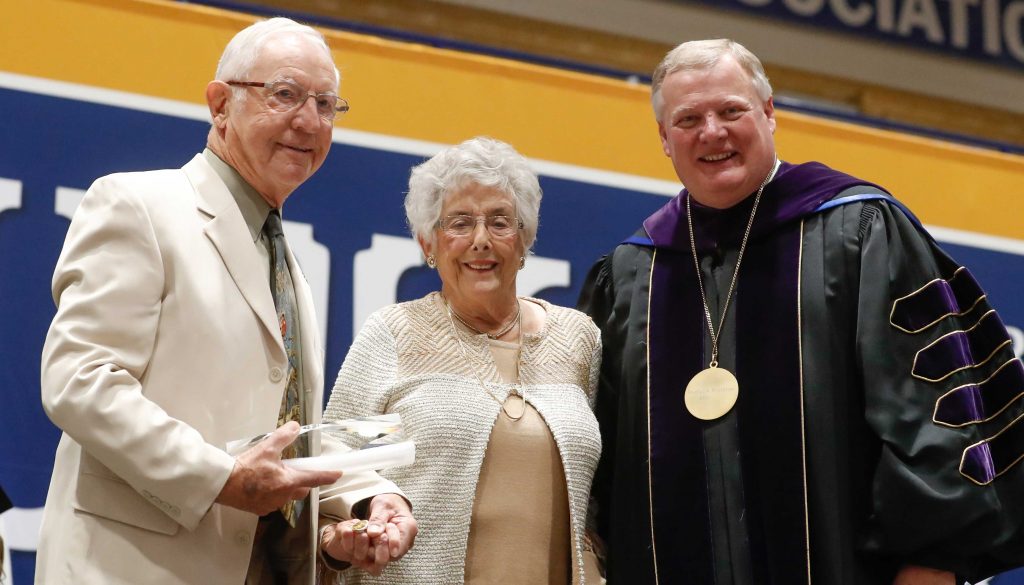 Established in 2003, the Cope Cornerstone of Excellence Award is presented annually to individuals who have provided significant service, support and promotion of UNK, the greater Kearney area, state of Nebraska and higher education. The award, approved by the University of Nebraska Board of Regents, is the highest campus honor at UNK.

“I think most anyone who has lived in Kearney for any length of time knows the Bushes,” he said. “They’re a highly-respected family of dentists and respected friends of the University of Nebraska.”

Two of the Bushes’ three children followed in their father’s footsteps by graduating from the UNMC College of Dentistry and three grandchildren are UNK or UNMC graduates.

In addition to their academic loyalty, the family has supported UNK and its students through their service and financial contributions.

“Their support of UNK extends from athletics to music to the Frank Museum to the Museum of Nebraska Art and UNK Greek life,” Kristensen said.

The Bushes, who live just outside Kearney, said the recognition from UNK means a lot to their family.

They don’t always enjoy the weather here, which is why the Bushes spend their winters in Arizona, but Richard said there’s one thing at UNK you can’t beat.

“We’ve been all over the place, and there’s nothing like Nebraska people,” he said.