“Connie is the budget officer, travel agent, event planner, recruitment officer, therapist and mom – to some of us – on top of everything else that she does.” – Frank Tenkorang, Economics Chair

KEARNEY – Professor Frank Tenkorang may hold the title of chair for the University of Nebraska at Kearney Department of Economics, but he calls Connie Fie the “head” of the department.

The longtime office associate has worn a lot of hats during her 39 years at UNK, nearly all of which were spent in the same position.

“To say that she is easy to work with will be an understatement,” said Tenkorang, the eighth department chair Fie has worked under. “Connie is the budget officer, travel agent, event planner, recruitment officer, therapist and mom – to some of us – on top of everything else that she does.”

Fie, who is retiring June 1, is the only office associate the department has ever had. 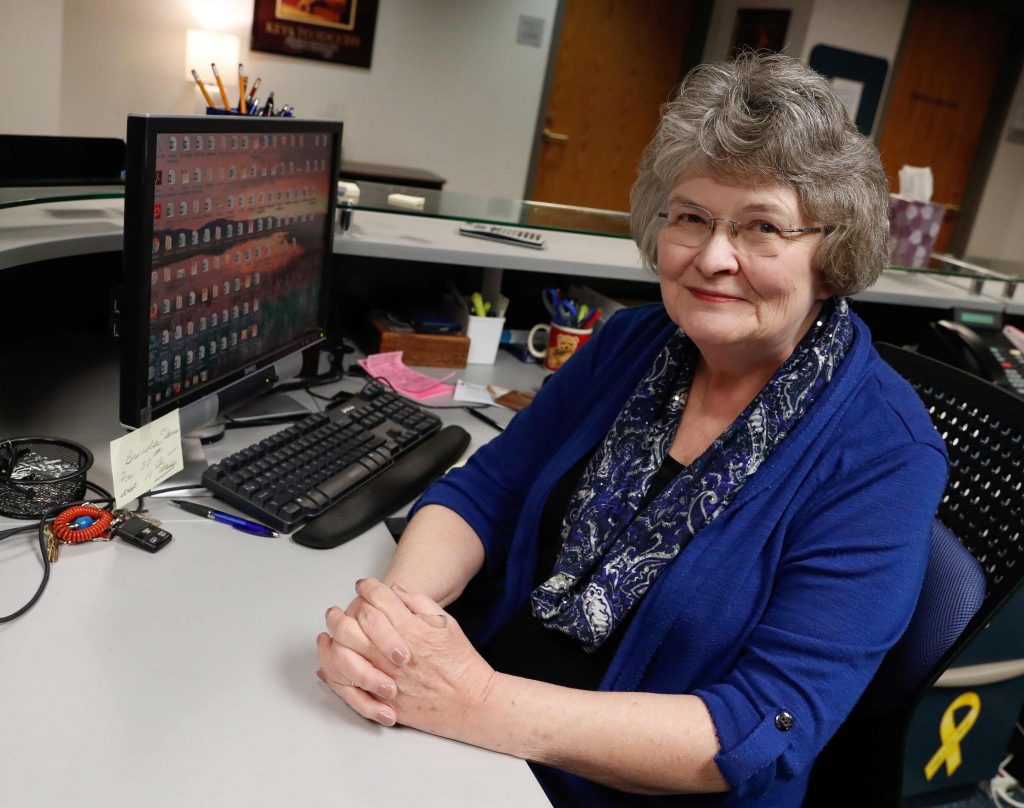 After graduating from Kearney High School in 1964, Fie married her husband Joel, a U.S. Navy veteran, and they spent 2 1/2 years in Rhode Island, where she worked at the Naval War College in Newport. The couple lived in Hastings for 11 years, and Fie was employed by the college there, before Joel changed jobs and Fie decided she wanted to go back to school.

Her mother, Edna Luce, who already worked as an office associate at UNK, pointed Fie toward a part-time position that allowed her to take classes in human development and relationships (now family studies) alongside the job.

“It worked out perfect,” said Fie, who moved back to Kearney and started her new venture in the College of Natural and Social Sciences in September 1979.

“That’s when I moved over here,” Fie said from her third-floor office in West Center. “I was at the far end of the building in what we called the garden level. It was actually part of the tunnels. That just sounded better.”

A lot has changed in West Center since then, but Fie remains the constant. She earned her degree from UNK in 1984, and became a full-time staff member three years later.

Between her high school and college graduations, Fie and her husband adopted and raised four children.

“I was a little preoccupied,” she said with a laugh while discussing the gap.

Fie considered a career in social services after graduating from UNK, but couldn’t bring herself to leave the university. “I liked the people and I liked the students, and I like learning. I usually learn something every day I’m here.”

She’s adapted to new responsibilities and technology over the past four decades – although there is a typewriter in the department that still gets some use.

Tenkorang credited Fie for taking advantage of every opportunity to upgrade her skills.

“Thanks to her, the economics department webpage has been one of the most up-to-date in our college,” he said.

Fie called her upcoming retirement bittersweet. She’ll miss meeting all the students and faculty members who come to UNK from across the globe.

“I don’t know how many other places you could work where you’d be exposed to all those different cultures,” said Fie, who mentored countless student workers over the years and got to watch them grow during their time here.

“I’m long past retirement age, but I’ve stayed because of the people,” she said. “I just have a great department and great people to work with. They’re my friends.”

The 71-year-old has 10 grandchildren she plans to spend more time with, and she also enjoys genealogy, traveling and volunteering. “I’m looking forward to trying some new things and seeing what retirement has to offer.”

3 thoughts on “‘Mom’ to economics department, Connie Fie retiring after 39 years at UNK”