LINCOLN – Four generations of Morgan Daubert’s family have ties to the University of Nebraska at Kearney.

She doesn’t want that tradition to end with her.

“Being able to follow in their footsteps is something I’m worried my kids may not be able to do,” Daubert, a UNK freshman from Omaha, said Tuesday during a meeting with state Sen. John Lowe of Kearney.

The K-12 health and physical education major was part of a group of UNK students who made the two-hour trip to Lincoln to show their support for the university system and urge Nebraska lawmakers to minimize further state funding cuts.

“UNK means a lot to us and I think you should support us,” Daubert said during her visit with Lowe as part of “I Love NU Advocacy Day,” an initiative that brought students, faculty, staff, alumni and other supporters to the state Capitol to advocate on behalf of the university.

Lowe, who represents District 37 in Buffalo County, told students he will fight for UNK.

“I will do everything I can to make sure UNK gets as much money as possible,” said Lowe, who graduated from UNK, as did his wife, oldest son, father and grandfather.

The Kearney senator said the university system is important to him. But, he added, there isn’t as much state funding to go around.

“That’s the problem we have. We just don’t have the money,” Lowe said.

Tuesday’s event was a sign of solidarity among the university’s five campuses, which have all been impacted by recent cuts to state funding.

“It’s so important to show how we’re working together,” said Kelly Bartling, assistant vice chancellor for communications and community relations at UNK. “We can be stronger by portraying ourselves as one university.”

Bartling helped organize the busload of UNK representatives who traveled to Lincoln for some face-to-face time with senators. The goal, she said, was to establish a connection between the university’s budget and state’s future.

“Investing in the university is an investment in the state of Nebraska,” Bartling said. “Somewhere along the line that message has been disconnected or it’s been quiet. It’s important to get people in front of senators before they vote on the budget and tell them that.”

Inside Lowe’s office, students shared their stories and talked about what brought them to UNK. A common theme was affordability.

“Most of us came here because UNK is affordable,” said Partridge, a business administration major from Grand Island.

Morfeld called higher education the “great equalizer” in society, saying it should be available to all Nebraskans as they pursue their dreams.

“We’ve never had better-quality students than we have today,” he said.

With the state facing a projected $200 million revenue shortfall for the current two-year budget cycle, Gov. Pete Ricketts proposed the University of Nebraska and state and community colleges take a 4 percent funding cut in 2018-19.

However, the Legislature’s Appropriations Committee recommended that cut be reduced to 1 percent. Budget reductions for the current fiscal year, which ends June 30, would remain at 2 percent.

Although these cuts would be painful for UNK, Kristensen said the university is willing to shoulder its share of the load.

“Our biggest fear is that we’re going to do long-term damage because of a short-term problem, and that’s what we’ve got to avoid,” said Kristensen, who expects the state economy to improve moving forward.

Partridge said he and other UNK students don’t want to see any more programs or staff and faculty positions eliminated.

“We care about the education of future Lopers,” he said. 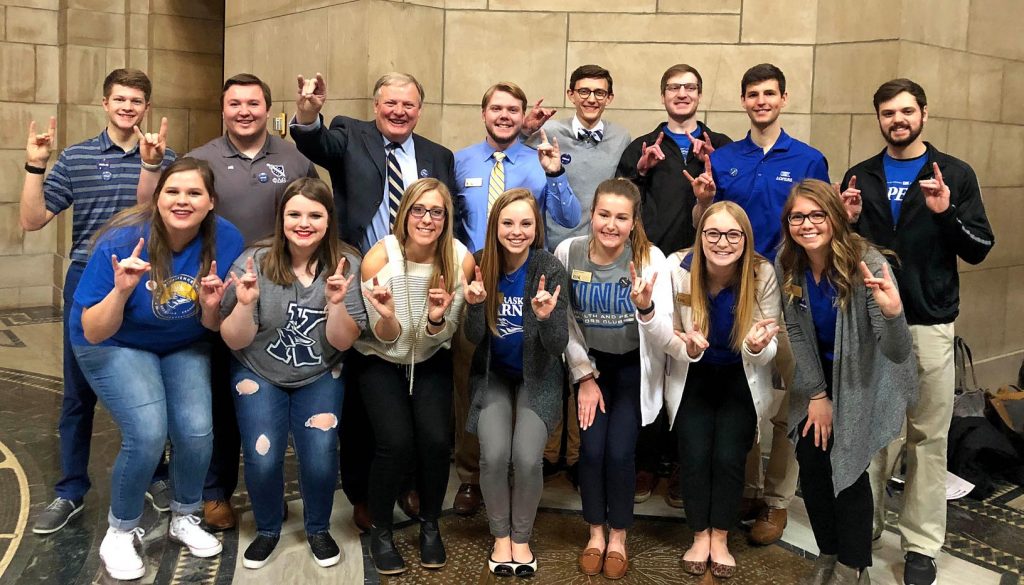