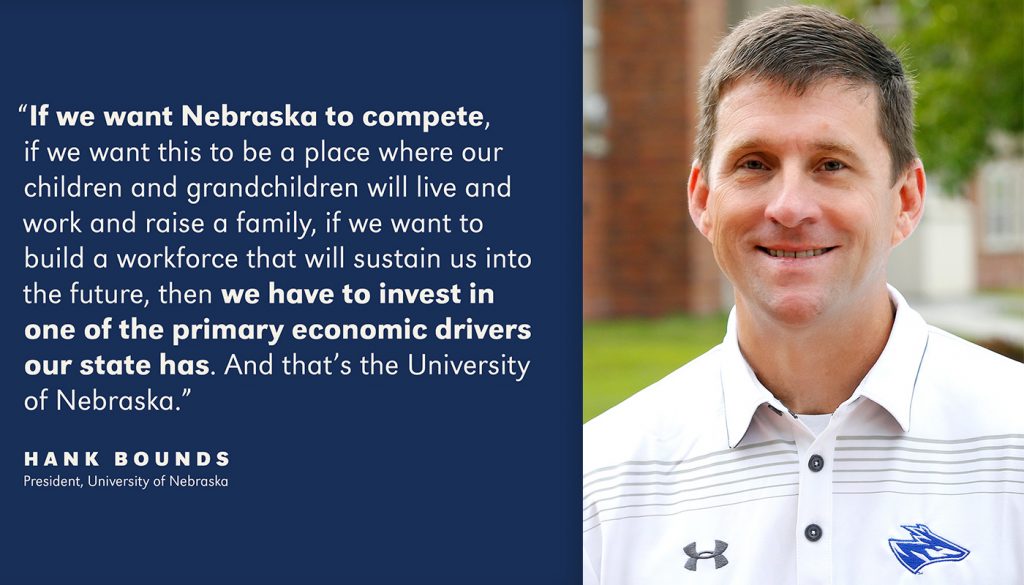 LINCOLN – University of Nebraska President Hank Bounds and Board of Regents Chairman Rob Schafer were joined Wednesday by students, leaders in business and agriculture, community members and other NU supporters in asking members of the Legislature’s Appropriations Committee to make affordable, excellent higher education a priority for Nebraska’s future.

Representatives of Nebraska’s chambers of commerce, Agriculture Builders of Nebraska and the private sector; students; and a cancer patient who has received life-saving treatment at the medical center were among those testifying to the Committee. In addition, hundreds of Nebraskans wrote letters to the Committee voicing their support for continued investment in the University and expressing deep concerns about the impact the Governor’s recommended budget reductions would have on the University’s competitiveness and affordability for students and families.

In a packed hearing room, Bounds asked legislators to consider what kind of future they envision for their children and grandchildren.

“We are at a defining moment in Nebraska’s history. We have a choice to make,” Bounds said. “Are we going to reaffirm the partnership between the state and its public university that has opened the door of opportunity to young people and driven economic growth for almost 150 years?

“Or will you decide that you no longer see the value that the University of Nebraska provides, and make it harder for us to offer affordable and excellent education to our 53,000 students?”

Bounds added: “…The University has been and will be a partner in helping you manage this challenge. But if we want Nebraska to compete, if we want this to be a place where our children and grandchildren will live and work and raise a family, if we want to build a workforce that will sustain us into the future, we have to invest in one of the primary economic drivers our state has. And that is the University of Nebraska.”

In reviewing the impact of budget reductions, Bounds noted that NU campuses currently represent a great value compared to peer institutions – but tuition increases would threaten access at a time when the workforce demands more college graduates, not fewer. 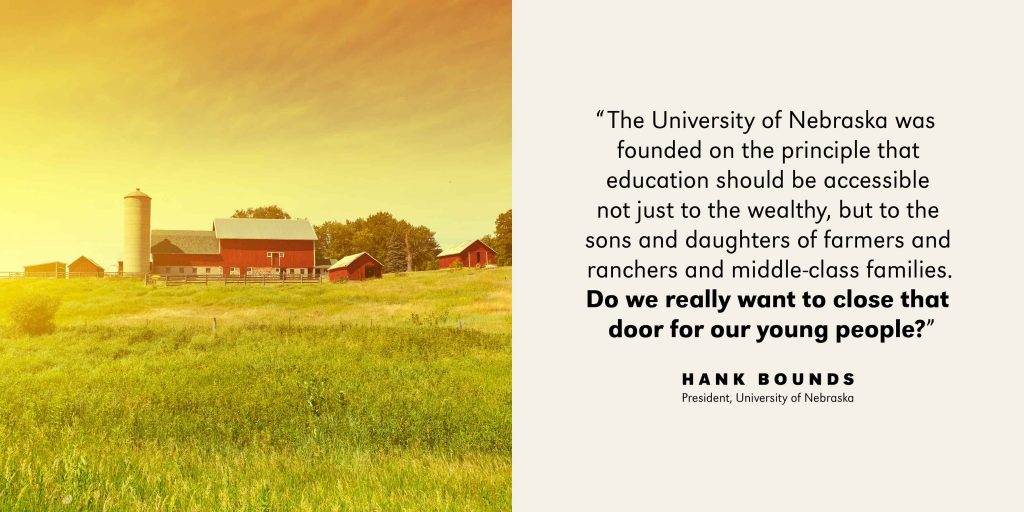 He noted that cancer rates in Nebraska are higher than the national average – including one of the highest rates of pediatric cancer in the country and the second-highest rate of pediatric brain cancer – and that Nebraska has increasing incidences of pancreatic cancer, bladder cancer, malignant skin tumors, liver cancer and thyroid cancer.

“We have some of the best cancer doctors in the nation right here in Nebraska who are working day and night to find answers. But if we don’t invest, the numbers aren’t going to improve,” he said.

Bounds said the release of the proposed cuts has made for a difficult week for the University, particularly at a time of momentum and opportunity when the University is in a strong position to help grow Nebraska’s workforce and economy. The University produces 11,000 new graduates each year for the workforce, returns $6 for every $1 the state invests and is increasingly a leader in areas important to the state and world like agriculture, cancer research and national defense.

Nevertheless, painful conversations about programmatic cuts and tuition increases are necessary, Bounds said, given that the University has already identified $30 million in operational reductions as a result of past cuts in state funding. The University has about the same number of employees supported by tax and tuition dollars today as it did in 2000, even though enrollment has grown from 45,000 to almost 53,000.

Bounds asked the Committee to restore the University’s base funding to $580 million in 2018-19 in order to limit damage to NU’s trajectory and send the right message to young people, top talent and companies the state hopes to recruit.

“I’m asking you to make a choice about the future of Nebraska,” Bounds said. “I hope you will decide that the University of Nebraska is a priority for our state.”

Following are additional quotes from testifiers at Wednesday’s hearing:

Rob Schafer, Chairman, University of Nebraska Board of Regents
“It’s an incredible honor to be Chairman of the Board during a period of such momentum and opportunity for our University and state. It is also sobering to assume this role at the exact time that we are facing budget cuts that could stall our trajectory.”

Ashli Brehm, a breast cancer survivor from Elkhorn who was treated at the University of Nebraska Medical Center
“While I was undergoing my treatment, the Fred & Pamela Buffett Cancer Center was being built. For me, it felt like hope was being physically built from the ground to the sky. Seeing that building going up, I thought, ‘What an incredible time to be in Nebraska,’ because when you see so much effort put into something, you know it’s only the beginning of great things to come… Why on earth would we make a decision to back away from that? I’m concerned that if funds are cut this year, then what is to stop this from happening year over year? And then suddenly, we have a beautiful facility that is depleted of the life-altering research that was the impetus for a cancer center in the first place.”

Bart Ruth, immediate past president, Agriculture Builders of Nebraska
“The University’s contributions to Nebraska agriculture are numerous and significant. It is not an exaggeration to say that Nebraska has become a global leader in this area thanks in large part to innovations born out of University research… We should be proud of that. And we should make decisions that help keep that momentum going.”

Tonn Ostergard of Lincoln, past chairman of the University of Nebraska Foundation, chairman of Crete Carrier Corp., and one of 187,000 NU alumni in the state
“I’ve spent years working alongside fellow alumni and friends – people who care about this University, who recognize its vital link to the success of the state, and who want to see it change other peoples’ lives the way it changed theirs. Here’s what I’ve learned: The connection and commitment that alumni and friends, in Nebraska and around the world, have to their University is truly remarkable.”