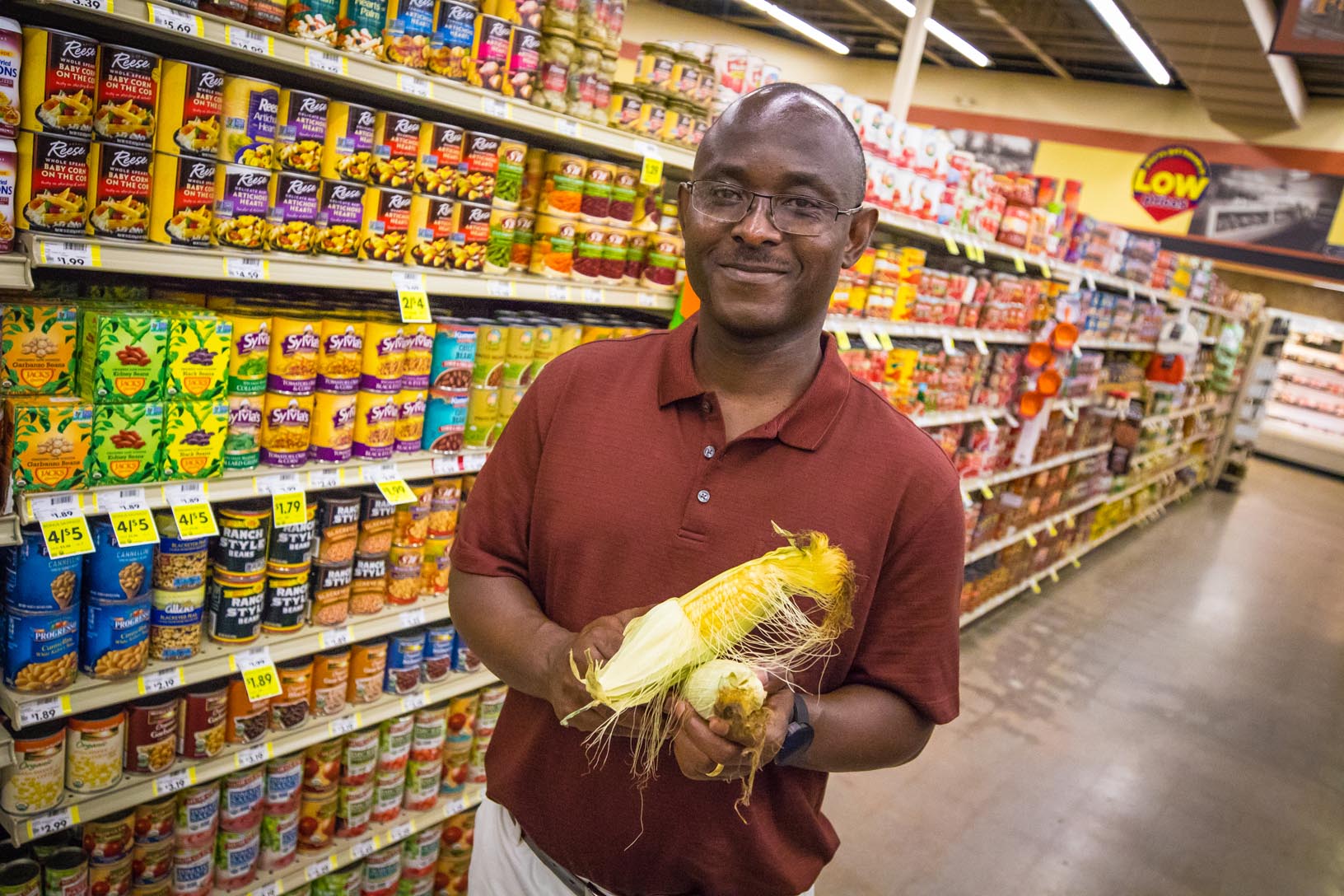 Frank Tenkorang was still a graduate assistant at Purdue University when his officemate mentioned some exciting news: the school had started powering its trucks with soy biodiesel.

It was 2005, and the United States was jumping on the biofuels bandwagon.

In the years since, Tenkorang has seen biofuels – corn-based ethanol in particular – evolve from a budding industry into an established part of the Midwest economy, and now into a controversial commodity with a future that’s up for debate with the current administration. Federal support ended in 2011, and there’s strong opposition to further subsidies.

“There were about billion in tax credit and import tariffs to protect the ethanol industry. It was then young, and it is cheap to produce ethanol in Brazil, so we had to protect the domestic producers. And there was also a blender’s subsidy, for those who blended ethanol with gasoline to reduce their cost. They have all been taken away,” Tenkorang said.

Biofuels are produced from living matter, unlike fossil fuels that use non-renewable resources. A Renewable Fuels Standard, passed by Congress in 2005 and expanded in 2007, requires that the transportation fuel sold in the U.S. include up to 36 billion gallons of biofuel by 2022. While the U.S. is using and producing more ethanol than ever, Tenkorang said the product’s reputation and chances for future government support are hurt by critics who think ethanol takes too many acres of corn away from food production.

“Those of us in the Midwest … we think that ethanol is good because it helps in job creation, supports prices for farmers, also energy independence, but there are many countries out there painting a very negative picture for ethanol,” Tenkorang said. “And one of the main reasons we’re seeing a decrease in government support is because of the effect on food prices. And this is not just in the U.S., but it is a global effect. Most developing countries are complaining about U.S. ethanol and high food prices.”

Believing that ethanol production creates higher food prices and food shortages, policy makers are pushing for “second-generation ethanol,” made from materials such as wood chips and algae rather than corn. But Tenkorang said people may be turning away from the corn-based fuel too quickly. His research has shown that ethanol production wasn’t to blame for the doubling of food prices since 2000.

“There was a correlation” between increasing ethanol production and increasing food prices, he said, “but not causation.” 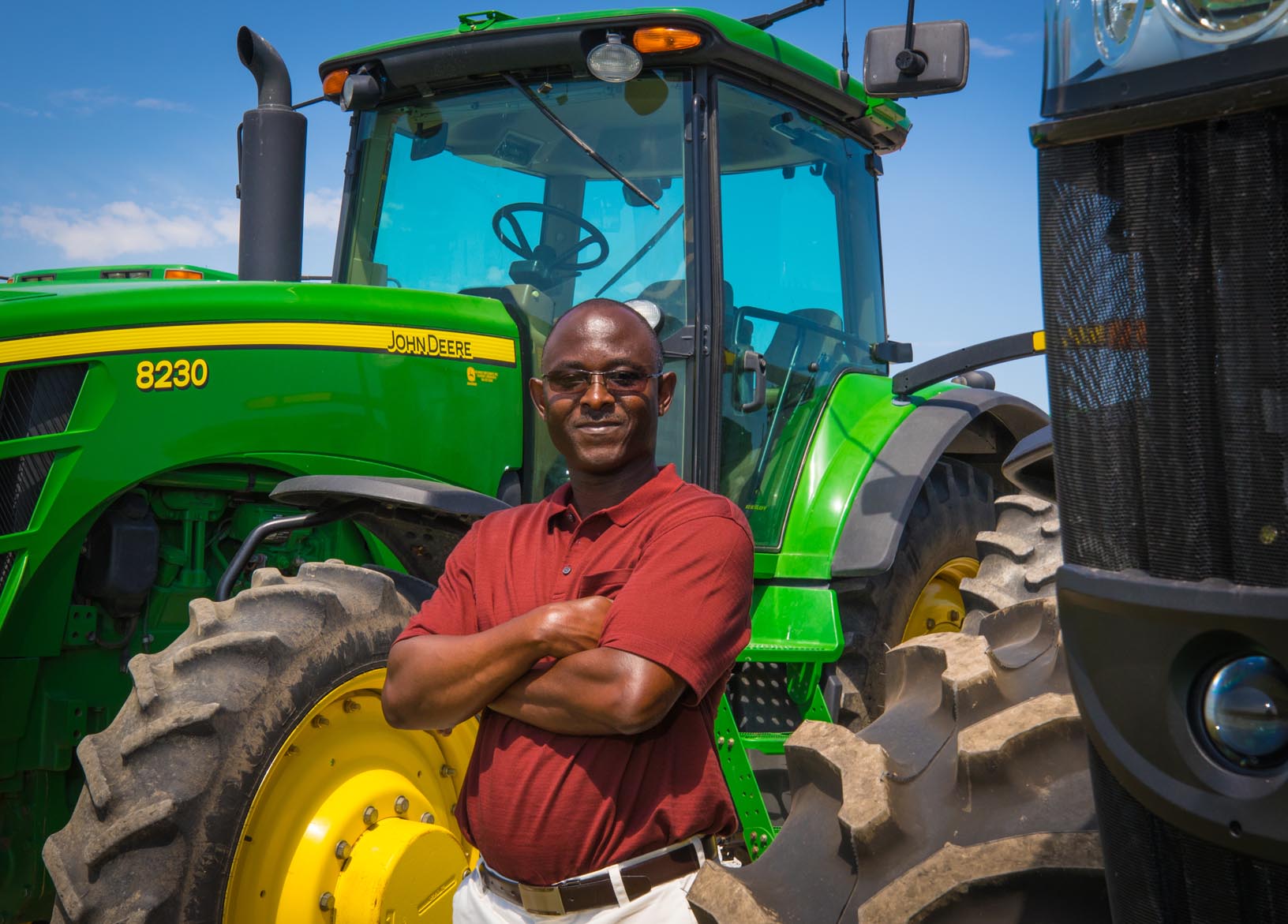 A professor and chair of the economics department at the University of Nebraska at Kearney, Tenkorang has studied the economic effects of ethanol for almost a decade. He’s looked at how ethanol production affects other crops, consumer decisions related to ethanol, and the fuel’s impact on corn prices.

A paper accepted by the Agricultural Economics Review outlines his findings on ethanol and food prices. In “Ethanol Production and Food Price: Simultaneous Estimation of Food Demand and Supply,” Tenkorang and co-author Bree Dority O’Callaghan used data from 1980-2014 to create food demand and supply estimates. They found that the huge increase in ethanol production by Brazil and the United States didn’t have a statistically significant impact on world food prices. In fact, if producing more ethanol can bring down energy prices, the alternative fuel could help lower food prices.

“One thing we see now is very low energy prices. Oil prices are down, and one of the things we found in that study is that one of the big factors influencing food price was energy price, not ethanol.”

Tenkorang hopes the article will appear in the journal later this year, and that its findings can help influence policy makers toward investing in ethanol.

Tenkorang’s research focus on ethanol was a product of timing and location. A native of Ghana, he came to the United States to attend the University of Wyoming. By the time he received his doctorate from Purdue in 2006, the U.S. produced 4.9 billion gallons per year, according to the Renewable Fuels Administration. That number grew to 13.9 billion gallons by 2011.

Demand was high for economists to analyze the effects of the booming industry. Tenkorang’s first interview was at a research institute keen on research about how ethanol would affect commodity prices. During his visit, he saw another school announcing a job search for an energy economist to work on ethanol.

Once at Kearney, Tenkorang found himself in the middle of corn country – the perfect place for research on ethanol. He has since written several journal articles and presented at numerous conferences about the subject, as well as writing an article titled “Nebraska, Sprinkled with Corn and Ethanol” for the 2015 encyclopedia Just Plain Folks: Studies of the People of the Great Plains. His work – with UNK economics professor Debbie Bridges – spans the expansion years for U.S. ethanol, through a production dip after 2011, to the current growth period that’s seen production rise to 15.3 billion gallons, 1 billion of which is exported. 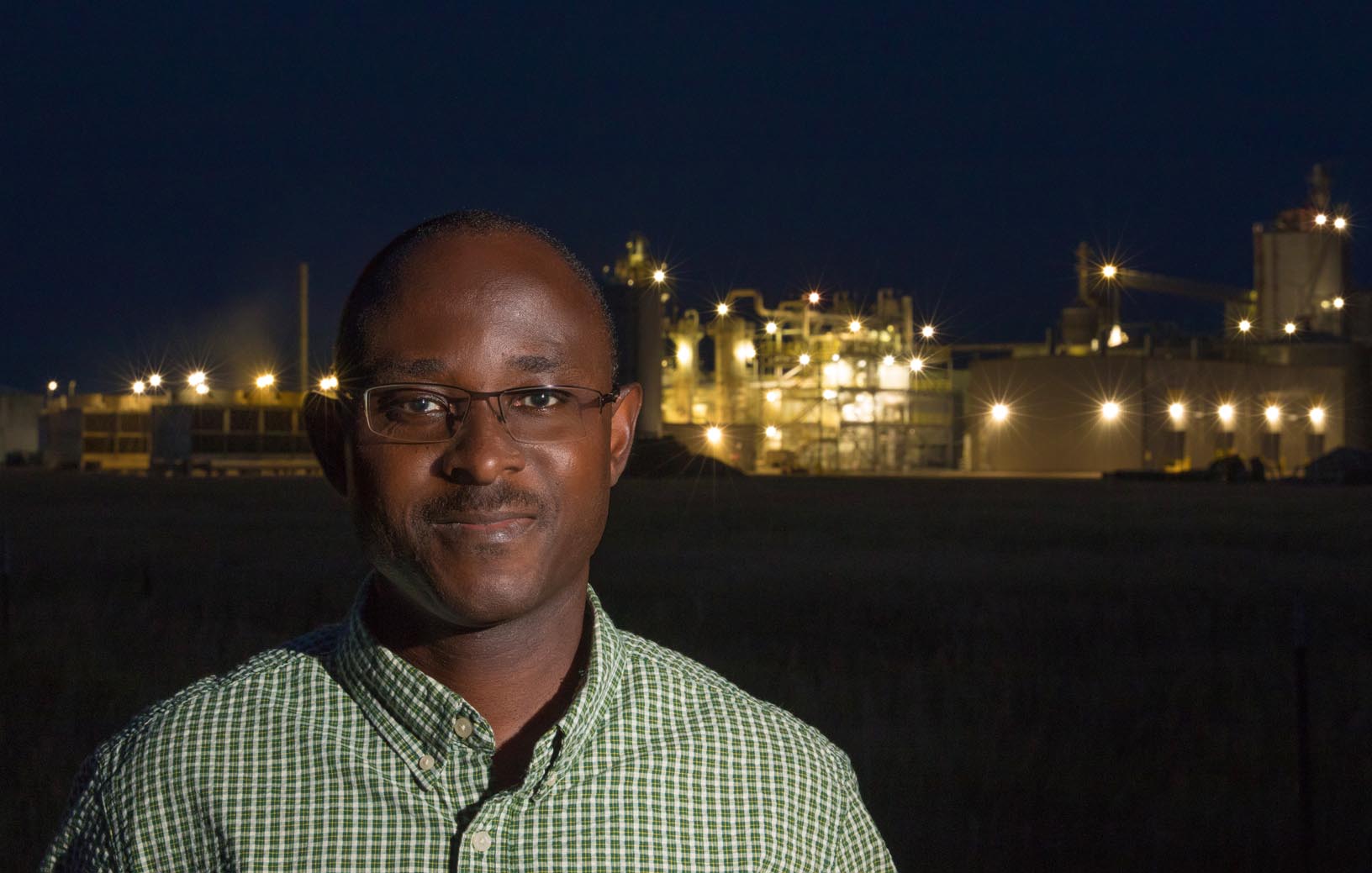 While it’s promising to see the ethanol industry grow with less government support, the question now is how to keep the industry expanding.

In a 2015 study published in Energy Economics, Tenkorang looked at the relationship between ethanol and gasoline. Analyzing data on fuel consumption, he found that today’s drivers consider ethanol a complement to regular gasoline, rather than a substitute. That attitude suggests that usage won’t increase by trying to convince more consumers to choose ethanol. Producers may be better off trying to increase the percentage of ethanol that’s blended with gasoline.

“We’ve gotten to a point that we can’t increase consumption of ethanol without consumption of gasoline. With that, if we are going to see an increase in production, how are we going to use that increased production? We may have to switch from E10 to E15, or maybe E20 or 25,” Tenkorang said.

And that is where federal subsidies could be useful.

“That’s also a concern because most gas pumps cannot handle a high percentage of ethanol, so the gas stations may have to change their pumps, and that requires money,” he said.

Tenkorang’s long-term interest in ethanol issues has also led University of Nebraska-Lincoln professors to include him and other UNK faculty in an upcoming project that will take a more comprehensive look at agricultural and ecological issues. The research depends on the success of a 2016 grant proposal submitted to the University of Nebraska System Science Collaboration Initiative, which Tenkorang describes as FEW – Food, Energy and Water.

“What we want to do is look at the three components together, rather than looking at them separately,” Tenkorang said, to get a comprehensive view of how the three influence each other – how the production of food and energy affect each other, and how they affect water supply and quality. Tenkorang said they’ll begin by gathering data within Nebraska.

“We want to understand it here, then apply for a bigger grant that will allow us to look at it on either a national or a global scale,” he said.

So far, Tenkorang’s research has used existing data, analyzed using various equations to control for relevant variables. Collecting and working with his own data has been Tenkorang’s goal for years, though, and he’ll do that in an upcoming project with Fletcher Ziwoya of UNK’s department of communication.

Their pending grant application would fund a study on consumer attitudes toward ethanol, with the goal of determining what influences the way people feel about the alternative fuel.

“These days it’s all ‘Well ethanol is not good, it requires too much energy.’ Others claim it has negative impact on food prices, causing food prices to increase. Is this real, or is this just how people feel?”

By surveying participants about their backgrounds and lifestyles, he hopes to find a relationship between their ethanol attitudes and some other factors. For example, Tenkorang said, he would expect people from Nebraska and Iowa to have more favorable ideas about ethanol than people from California.

Already, Tenkorang knows just how much Americans’ attitudes toward the fuel have changed, as ethanol has become a part of their daily lives.

“What I see, first of all, I think we are beginning to accept it. Initially we thought it was going to break down our vehicles, and I think that fear is gone. We don’t have that fear any more. The concern that people have, and again most often outside the corn-producing areas and in other countries, is that it still has an impact on food prices. They hold onto that belief strongly, that it has impact on food price, and they just don’t like it.”

“I’m hoping that what we see now, of the low commodity price, more ethanol production, low energy price, people will begin to connect the dots themselves.” 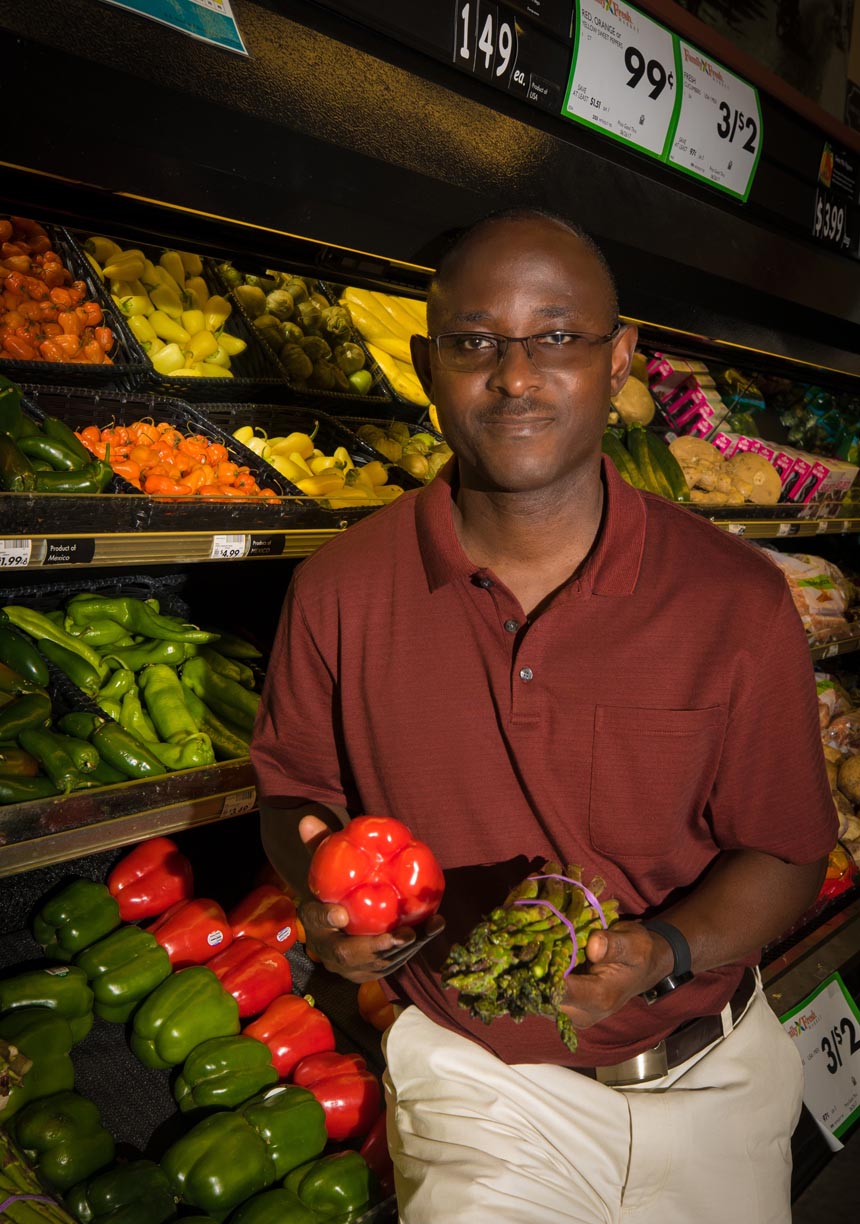