He high fives a girl on her way to class. She smiles. He smiles.

It’s a simple act. But the type of interaction Johnson says is essential in today’s schools. It is the relationships with students, he says, that make a difference.

“If a kid knows that you care about them, they’ll walk through fire for you. But if they know that you don’t, then you’re never going to get them to learn,” says Johnson, principal of the Kearney school with 250 students.

Johnson and longtime friend Sam Stecher, superintendent at East Butler Public Schools, are connecting with other educators through their Mission Monday curriculum and book “It Happens in the Hallway.” Both are graduates of the University of Nebraska at Kearney’s educational administration master’s program.

When Johnson was a Kearney elementary teacher in the late ‘90s, he crossed paths frequently with Stecher, then an eighth-grade teacher at Kearney’s Horizon Middle School.

Over the next few years, the two met every Tuesday night at Black Sheep Coffee in downtown Kearney. They discussed anything and everything when it came to education.

“We’d talk about what was going right and what was going wrong,” Stecher said. “We’d celebrate our successes, and when things weren’t going right, we’d make sure the other one wouldn’t quit. But it was a chance to bounce ideas off of each other.”

The two talked about the environment they were working in, and Johnson and Stecher quickly realized they shared the same philosophy.

After meeting at downtown coffee shops for the better part of a decade, they decided to formalize what they had developed in order to make schools more like a family atmosphere.

“Mark and I are very different people. There’s not a lot we have in common other than we really love education,” Stecher added. “We figured if it works in Sam Stecher’s eighth-grade classroom, and it’s working in Mark Johnson’s fifth-grade classroom, it’s probably a pretty good strategy.”

The name and concept came from a memory early in Stecher’s career when a morning announcement – on a Monday – said “Today is Mission Monday.”

“I heard that and thought there’s more power to just mentioning something that people should try and do during the week,” explained Stecher.

There are two elements that make up Mission Monday – a mindset and a curriculum. “You have to have a mindset that you want to be intentional with every interaction you have with people,” Johnson said.

The curriculum piece has evolved.

Every Sunday morning, Stecher and Johnson record a 10-minute video explaining what’s happening and what the week’s mission is. It’s then sent out on social media and to their mailing list. The mission is as simple as giving as many high-fives to people as possible, or having students write down and display their five favorite things about their classrooms.

There’s one critical element to every mission, though.

“It needs to have observable engagement,” Stecher explained. “If people aren’t writing something, creating something or engaged in physical activity that I can witness, I don’t know that it’s happening. I’ll never have a mission where it’s (simply) come to school with a positive attitude, because I don’t know what that looks like.” 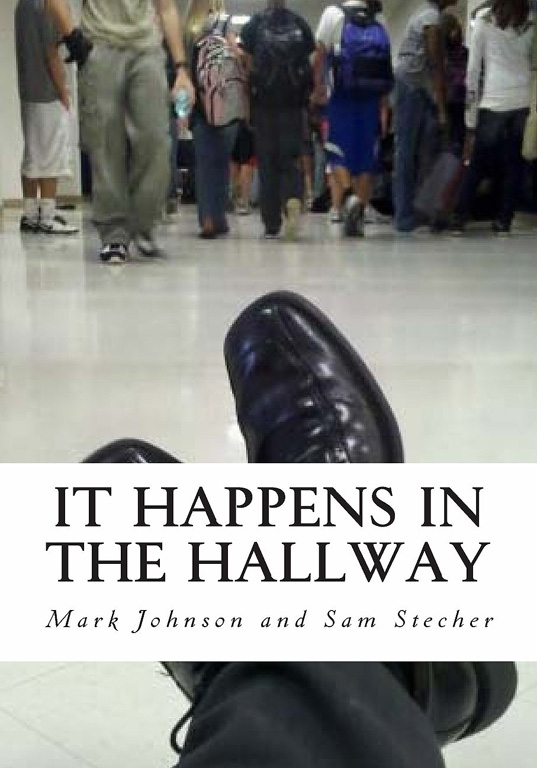 “IT HAPPENS IN THE HALLWAY”

While leading their respective schools and creating missions, Johnson and Stecher were also recording podcasts and writing blogs. This led them to write “It Happens in the Hallway,” which they published in 2015. The book shares their ideas and experiences, and explains how they’ve impacted the culture of classrooms and communities they serve.

Stecher and Johnson are also in demand as speakers, having presented at more than 50 education conferences.

“Sometimes when something is discouraging, or not taking the traction we want it to, we look at each other and (agree) that we’d be doing this exact same stuff anyway,” Stecher said.

That approach has changed schools that Johnson and Stecher are involved with.

“What’s most important are the relationships. If you have that established, then you can deal with the academic piece,” Johnson said.

“Mark understands that kids are, for the most part, products of the environment they are in,” said Luke Garringer, a former UNK cross country runner and physical education teacher at Bryant Elementary. “He creates a second family here at Bryant for the students.”

Last winter, a wishing tree at Johnson’s school led to a community rally ending in a donation of a washer and dryer to Bryant Elementary. The gift allowed students to be able to wash their favorite sweatshirts and coats, among many other items.

“With Mission Monday, it’s that social emotional piece that we pour a lot of energy into at Bryant,” Johnson added. “We know the academic piece is important, but this is more than an education institution. Hence the laundry.”