KEARNEY – An estimated 30 to 50 million bison once roamed North America before unregulated shooting reduced the population to about 1,000 by 1900.

Because of conservation efforts, today there are approximately 500,000 bison, including a small herd in the Henry Mountains of Southern Utah.

The herd, which is free ranging, genetically pure and disease free, is instrumental in bison conservation.

“It’s this crown jewel of bison conservation that not many people know about. It’s a really special area,” said Dustin Ranglack, assistant professor of biology at University of Nebraska at Kearney. “Bison are incredibly resilient and stubborn animals that find a way to survive wherever they are. 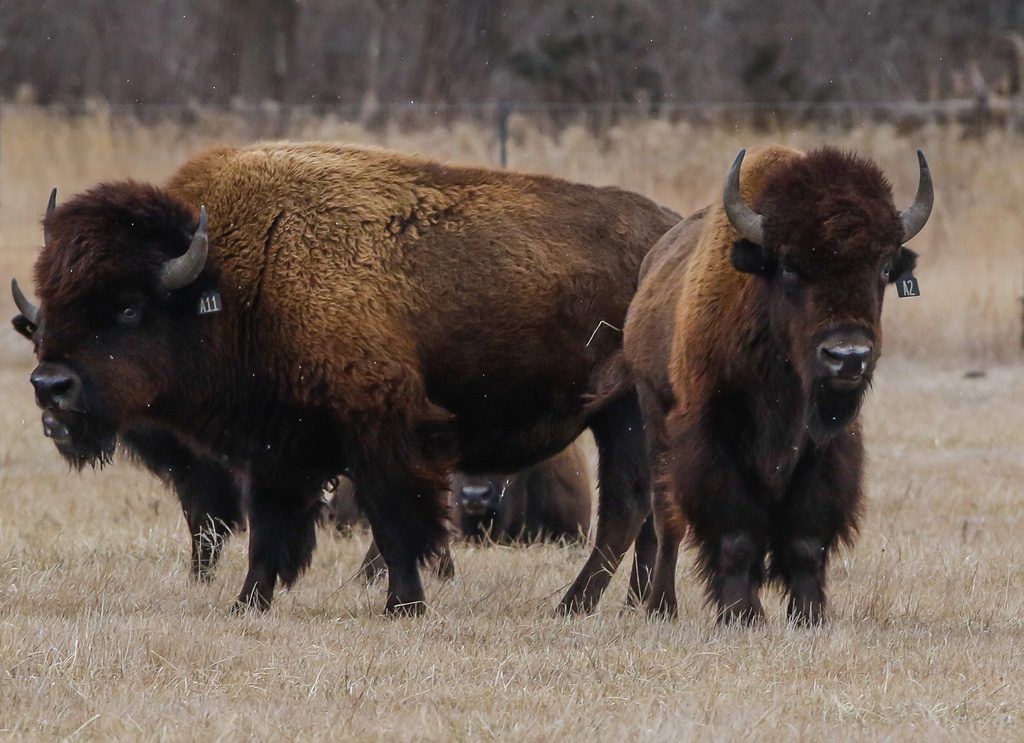 “I was able to see a little bit of myself in them. Any adversity that I come across, I always seem to find a way to overcome it. I refuse to give up, and bison are the same. So I guess they’re kind of my spirit animal in a way.”

Ranglack recently received the Southwood Prize by the British Ecological Society for his paper, “Competition on the Range: Science vs. Perception in a Bison-Cattle Conflict in the Western USA.”

The paper was a chapter in Ranglack’s dissertation, which focused on American bison ecology and interaction between bison and cattle in the Henry Mountains.

The prestigious international award is given to an early-career author, who is then invited to present their findings at the British Ecological Society annual meeting in Liverpool, England.

“This interdisciplinary study tackles a clear management issue using adequately designed experimental approaches, contributing to improving our understanding of human–wildlife conflicts in rangelands,” the British Ecological Society said in a news release. “Importantly, this case study illustrates the need for science-based management of social–ecological systems in which even long-term resource users might underestimate the complexities of trophic interactions.”

Ranglack presented his research to the British Ecological Society in December.

“It blew me away having my work recognized as having an impact on an international scale,” Ranglack said.

“The Henry Mountain bison is a relatively small herd in the middle of nowhere that relatively few people know about, so I never really thought that I was going to make a major impact scientifically with the research. I assumed it would have a local impact and change the way that herd was managed.”

As part of conservation efforts, the herd was introduced in the Henry Mountains in the 1940s from Yellowstone National Park. The rangeland, managed by the U.S. Department of the Interior Bureau of Land Management, is shared between cattle and bison. Ranchers have permits to graze their cattle on the land.

Bison graze throughout the summer, and ranchers aren’t allowed to put their cattle out until winter. Ranchers had increasing concern about the bison out competing with the cattle and grazing the land.

Ranglack’s research focused on ranchers’ perception on the influence of bison on grazing land and impact of other species such as mule deer and rabbits.

“I was also interested in finding alternatives to help the state of Utah keep the bison and continue to grow that herd – because it’s important for conservation – while also providing some options for the ranchers so it’s not negatively impacting the ranching community,” he said.

Ranglack looked at habitat selection and behavior of bison, including grazing behavior. Twenty 8-foot by 8-foot grazing exclosures were set up at different sites in the grassland. At each site there were two exclosures – one that kept out bison and cattle, and another that kept out bison, cattle and rabbits – to better understand how much grass was being consumed by each of those species.

“Bison are this big conspicuous presence on the landscape, but rabbits are small and mostly nocturnal so you don’t see them. But they’re having a major impact. The research shows that while it’s important to understand the local rancher’s perception of the conflict, if we make management decisions based off of perceptions we can often be wrong. We need to make sure we’re incorporating the science into our decision-making,” Ranglack said.

Utah spends about $1.35 million annually on predator removal, most of which is used on coyotes. Private citizens are offered a $50 bounty for shooting coyotes, the USDA Wildlife Services are hired to do aerial gunning and private contractors are hired to locate coyote dens and kill the pups. A coyote’s main prey is rabbit. Ranglack concluded that because of the depressed coyote population, there is an abundance of rabbits.

Ranglack presented his results to the state Henry Bison Committee, a group that meets annually to discuss issues surrounding the bison.

Ranglack is continuing his research of bison, now looking at habitat selection and habitat requirements of bison on a continental scale.

“There’s a spiritual connection that you develop when you work with bison in their natural habitats,” Ranglack said. “There’s something special about that animal.

“Ultimately, over the long-term, I would like to see multiple large bison herds free roaming across large landscapes all throughout North America.”