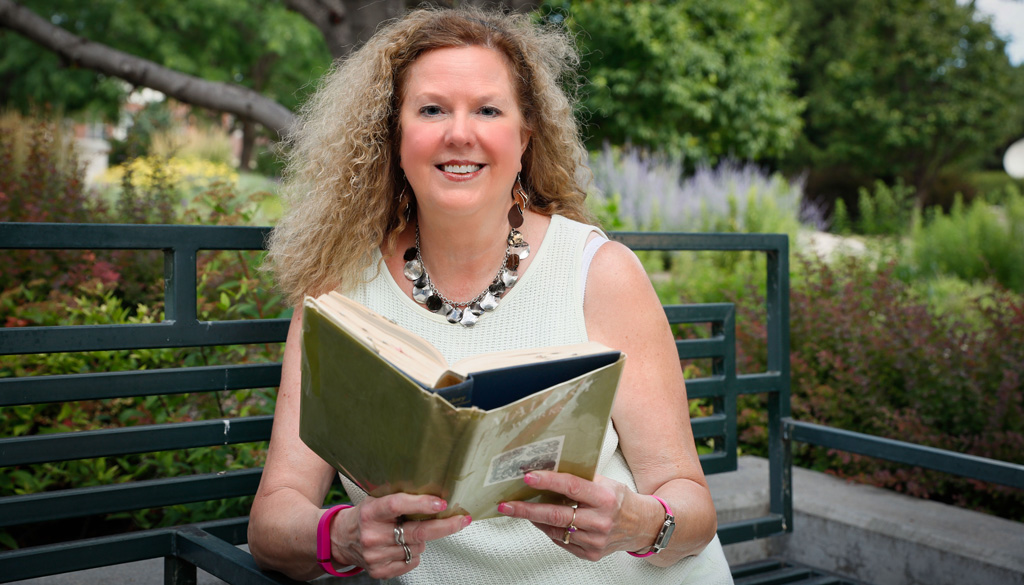 Rebecca Umland remembers the kernel of the idea for her research and teaching interest in the quester hero figure.

She and her husband were attending one of the final screenings of the 1999 David Lynch film “The Straight Story” at a Kearney theater. The film is based on the true story of an elderly man who drove his lawn mower tractor 240 miles from Iowa to Wisconsin in 1994 to reconcile with his dying brother, from whom he was long estranged. The film offers deep reflection about forgiveness and love in the face of death, and the quest for redemption.

Umland, professor of English at the University of Nebraska at Kearney, was struck by the film.

“I was so profoundly moved by the idea of the ‘old quester,’” she said. “Typically, the quester (in film and literature) is a young and naïve person who embarks on a life-changing journey. But in this film, the aged and ailing man’s journey reinforced the idea that transformation can come at any stage of life, that we don’t stop growing or making mistakes. The urgency of the dying man was prompted by his desire to right his mistake. He takes on the difficult task of going the slow way as a form of atonement and redemption. It fascinated me.”

Umland said the quester is an archetypal character found in a variety of literary and film texts, especially her favorite literary genre – Arthurian legend. And perhaps the fact the quester in the movie was an Iowan also resonated. 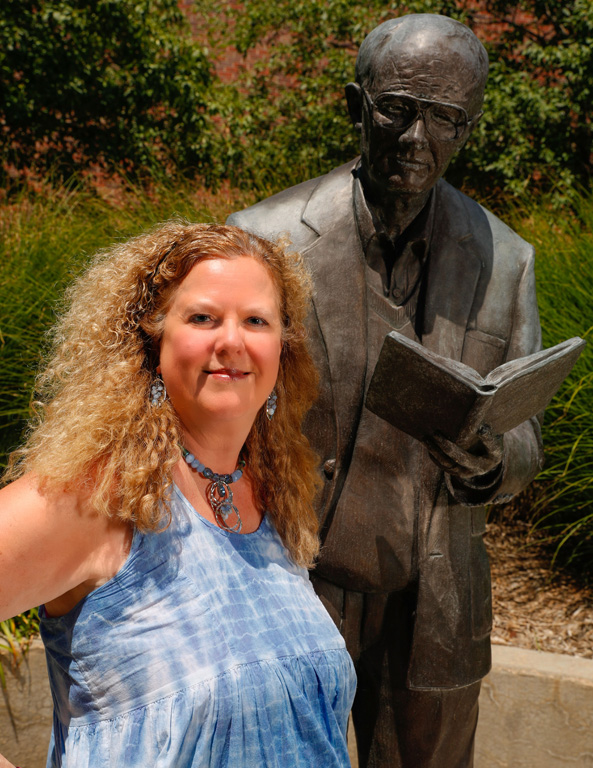 An Iowa native, Umland grew up just outside Iowa City, home to the University of Iowa and its excellent English program. She knew early on that she wanted to be a Hawkeye and teach high school English. But as she took undergraduate classes, she became more enamored of reading and learning. And after earning her bachelor’s degree, she just kept taking classes, eventually applying to Iowa’s doctoral program.

“I realized how little I knew, and how much I wanted to learn. I loved the graduate academic culture, one that spontaneously fed my desire to keep learning. It’s been an ongoing lifelong joy.”

After earning her Ph.D., Umland took a three-year position at Iowa State University, a job that allowed her to develop her professional skill as a college professor. ISU, she said, was very supportive in mentoring young faculty as they searched for permanent positions. And when a position opened in the English department at Kearney State College in 1989, Umland visited the campus and was impressed by its size and focused mission.

She’s never regretted taking the job, and when KSC became part of the University of Nebraska in 1991, she was excited that the college was becoming more research-focused. There were scholars already doing good work, and the climate encouraged academic publication, as witnessed by the annual Pratt-Heins Distinguished Research Awards, of which Umland was a recipient in 1999.

When the transition to the university system occurred, she and others benefited from the opportunity to apply for developmental leaves for research.

Umland has always been interested in Arthurian legend and the world of medieval romance, especially as it has retained its vitality in later eras. She has been a member of the International Arthurian Society since her graduate school days, and has presented papers at international conferences both in the United States and the UK.

Her research, she says, tends to be additive – building upon itself – even as it sets off in new directions. Her doctoral dissertation, for example, focused on medievalism in Victorian poetry. For Umland, Arthurian legend remains a recurrent research and teaching interest.

With her husband Samuel Umland, UNK English chair, she authored a book, “The Use of Arthurian Legend in Hollywood Film: From Connecticut Yankees to Fisher Kings.”

It explores various film genres and periods that have adapted the legend for modern audiences and cinematic viewing. After its publication, the authors were invited lecturers at the Arthurian Film Festival in Edinburgh, part of the City Art Centre’s Exhibition, “The Quest for Camelot – The Arthurian Legend in Art,” in January 2002.

Following the publication of a later book about the life and works of a Scottish painter and writer/director, “Donald Cammell: A Life on the Wild Side,” the coauthors were invited as speakers at the Montreal Film Festival in 2006.

Arthurian legend is in some ways the one great human story, endlessly retold, Umland said. 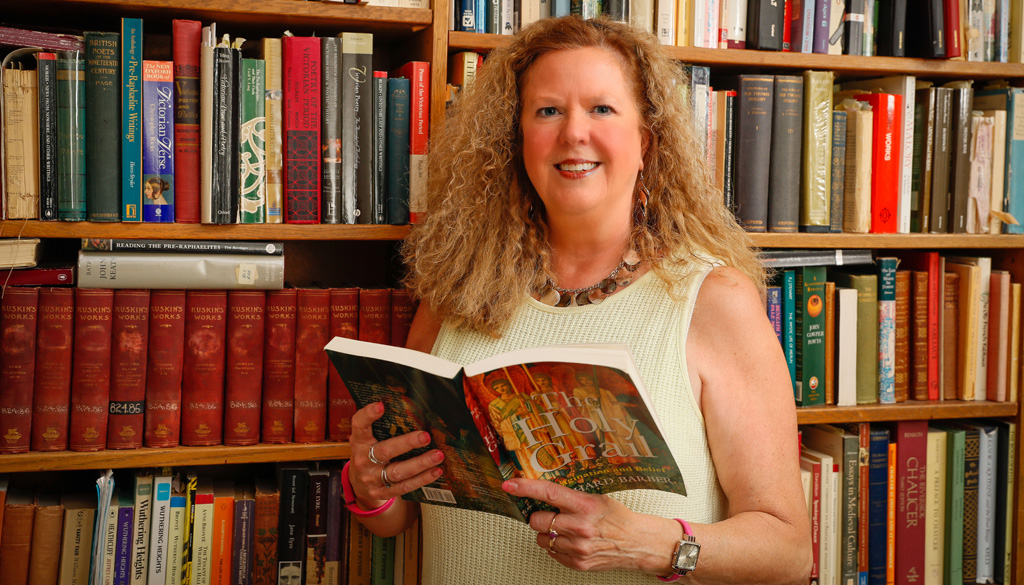 The King Arthur of medieval chronicle and romance could have been based on an actual heroic late 5th or early 6th Century warlord whose tale has been embellished far past its hazy origins. In the literary tradition, he allegedly earned his crown by withdrawing the magic sword from the stone. He became a “world conqueror” forming the Knights of the Round Table who later searched for the Holy Grail – the chalice supposedly used by Christ – a disastrous quest for most of them, and one that eventually destroyed the knightly fellowship and Arthur’s kingdom.

Mix in the illicit romance between Arthur’s chief knight, Lancelot, and Camelot’s queen, Guinevere, and the story begins to take its tragic shape. A noble but flawed hero, Lancelot must relinquish his destiny to be the knight who achieves the grail, that honor being reserved for his son, Sir Galahad, whose purity allowed him to complete the holy quest and ascend straight to heaven.

Are these names and plot lines familiar?

Umland points to countless retellings of the many medieval versions of the story – culminating in Sir Thomas Malory’s complete version, “Le Morte d’Arthur,” published in 1485, at the end of the Middle Ages. Malory’s is one of the earliest publications of the stories in English; more recent versions include, Rodgers’ and Hammerstein’s musical “Camelot,” Disney’s “Sword in the Stone,” “Star Wars,” “Monty Python and the Holy Grail,” Harry Potter films, and the hot television series “Game of Thrones.”

And the themes are not limited to Western culture. Japanese Samurai culture is heavily laced with these themes as well. The characters and themes are among the strongest archetypes in literature, as her coauthored article published in “Mythlore,”“All For Love: The Myth of Romantic Passion in Japanese Cinema,” explores these themes.

Umland says the renewed interest in Arthurian legend tends to resurface in cycles, especially during times of upheaval or uncertainty. Sir Thomas Malory was an imprisoned knight during the bloody English War of the Roses, so his text focused on the devastating effects of internal strife and how such divisiveness can destroy a world, she said.

Arthur, she said, is a crisis figure and his story helps modern readers interrogate issues about war, loyalty and the internal corruption caused by the misuse of power.

So, are we in that kind of period now? “Well, we’ll see what the next Arthurian film has to say,” Umland says.

And how does all this relate to an old guy driving a riding lawn mower across Iowa? Well remember the idea of the quester and the flawed hero? That’s related to the Arthurian ideal of redemption – Lancelot in particular. 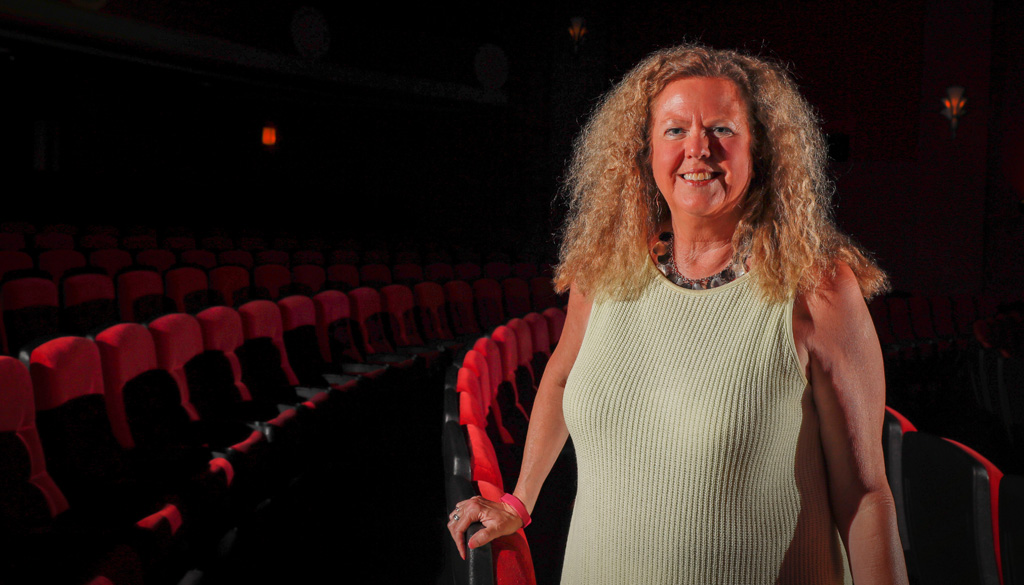 The flawed hero, the conflicted hero, the outlaw hero – one with a fierce individualism – are all so much more interesting than the perfect but one-dimensional Galahad, she said.

About four years ago, she began to explore more deeply how these characters move from mistake to redemption through the idea of liminality – an in-between space in the moral landscape of the worlds they inhabit.

In her recent book “Outlaw Heroes as Liminal Figures of Film and Television,” Umland describes liminal space as “an anthropological concept of a threshold between past and future, or between conflicting social values and/or individual experience and desires.”

Published in Spring 2016 by McFarland and Co., a press that specializes in scholarly works about popular culture subjects, Umland looks at a type of hero who negotiates between justice and the law. If the law is unjust, corrupt or inept, the liminal hero, who is neither part of the status quo nor entirely apart from the main culture, adheres to his own ethical code, and retains his individuality while serving the needs of the community.

As writer John Steinbeck noted, the outlaw hero who appears in Western films has distinct ties to Lancelot and the world of medieval romance, she said. Lancelot, who rescues the queen when she is sentenced to be burned at the stake for treason, knows that their adultery is a sin, but not one that should be punished so severely. He serves a higher justice than that which the law allows.

This type of hero, whose roots are in the world of medieval romance, enjoys an enduring popularity with modern audiences, especially those who favor urban westerns and action films, Umland said, citing several films and television shows that feature such a figure: “Shane,” “Casablanca,” “The Lone Ranger,” “Have Gun Will Travel,” both “Dirty Harry” and “Death Wish” franchises, “Rambo,” “The Batman Dark Knight Trilogy” and “Star Wars.”

People applaud poetic justice, she said. Sophoclean tragedy, Dante’s “Divine Comedy” and Shakespeare’s “Hamlet” share with modern stories of “The Lone Ranger” and “The Dark Knight” the problem of revenge and a higher justice.

So, is there just one story that we keep telling over and over?

“Well, what people cared about in the middle ages, we still care about those things now,” she said. “There is a universality to the story; we want to hear it over and over. The magic for me is that we want to hear about people who are people. They may fail, but they redeem themselves. They give us hope. The quester riding his lawn mower across Iowa tells us something about the nature of redemption, what you learn through the journey and what, by grace, you are given.”

And, she notes in “Outlaw Heroes,” “the stories a culture chooses to tell itself about its past, present and future shape and affirm its identity.”

In American culture, these stories that feature the liminal outlaw hero reconcile the mutually cherished but sometimes conflicting values of individual freedom balanced against self-sacrifice for the communal good. Only Shane, the gunfighter, can rescue a Wyoming farm community from a tyrannical rancher and unscrupulous professional hired gun, but after this violent resolution, Shane cannot join the community he saves. He must remain a solitary, marginalized figure – a liminal
outlaw hero. 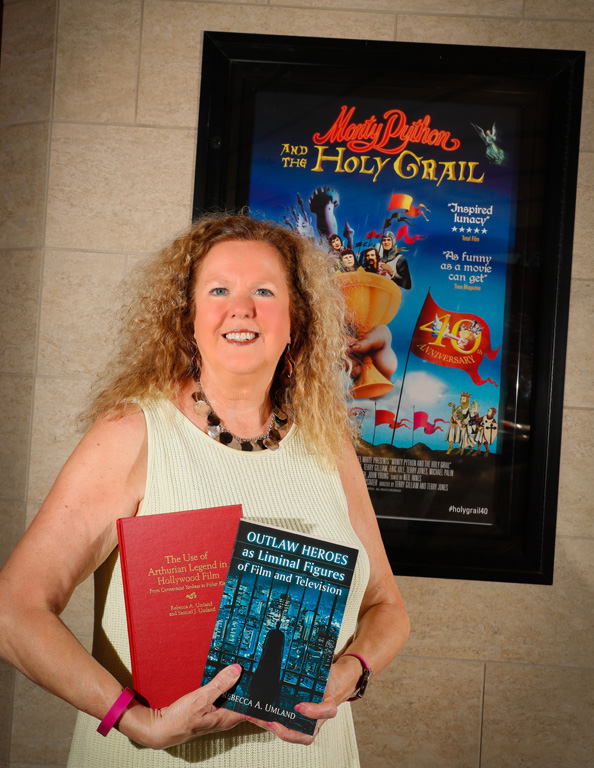 Umland said interaction with students in the classroom often introduces new lines of research interests for her.

“It’s the question I cannot stop thinking about that formulates my next avenue of inquiry. I never teach a class quite the same way twice because each group of students brings new thinking that becomes the next interesting question. It produces the happy surprises, such as wondering why we like flawed heroes.”

Umland said UNK has been an excellent fit for her. It’s an institution that is supportive of teaching and provides an encouraging environment for intellectual growth, she said.

“I feel that I belong to a larger academic community. My department has always done a good job of maintaining balance between a traditional curriculum and offering innovative courses. I enjoy having the freedom to conceive and develop courses with a different perspective,” she said.

Umland hopes her teaching and research efforts honor her mentors and others from whom she learned.

“I received a lot of proper encouragement from people who pushed me when I was a graduate student. I was given advice that I have treasured, lifelong advice regarding habits of study and inquiry, habits of professional development and a knowledge base upon which I have expanded. I do try to do the same for my current students. It is the greatest pleasure to see them succeed.” 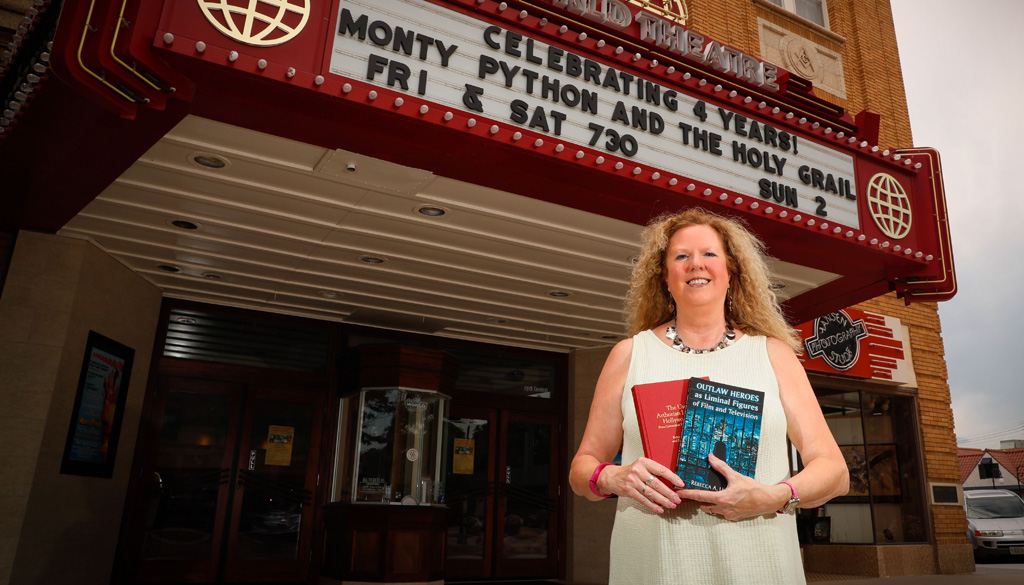