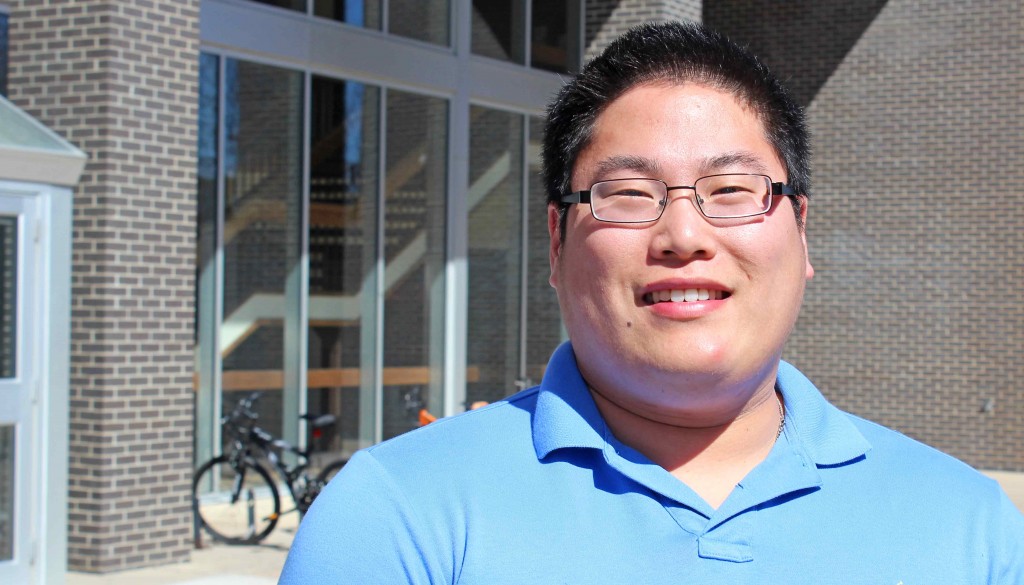 KEARNEY – The University of Nebraska at Kearney’s new Student Body President hopes to strengthen relationships while in office.

Evan Calhoun and Nick Stevenson were named student body president and vice president, respectively, after experiencing something that hasn’t occurred during UNK elections for more than 20 years. Calhoun and Stevenson were picked after facing two student government elections.

The first election had three parties seeking candidacy for the 2015-16 school year. None received a majority vote, resulting in a runoff election that Calhoun and Stevenson won.

“We started to doubt ourselves,” said Stevenson, a junior journalism major from Columbus. “We thought ‘Wow, now we have to do this all over again,’ but within a couple of hours we said ‘O.K., not a big deal.’ We put a plan together to move forward and it paid off.”

Calhoun and Stevenson were sworn in to begin their roles as student body president and vice president on April 7. Both agree their platform is unlike any UNK has seen, and now that the first hurdle is behind them, they’re ready to jump over the next.

Can you tell me a little about your platform and ideas for your term as student body president?
“We have 15 or 16 extensive ideas on our platform, but our main goal is to strengthen the relationship between Student Government and different organizations around campus. Nick and I want to be the kind of people you can go to with any questions at any time.
“We are going to promote more Loper athletic games. We want to make sure all students around campus utilize going to the games, band and choir events, and other events like that.”

What first sparked your interest in running for student body president?
“This year I got really involved in student government, and going in with the term I really liked how punctual and professional everything was, especially the meetings. I like the leadership and it was a thing where I’ve always had in the back of my head coming in to Kearney ‘do I want to take on a big leadership role like president’? Going into my senior year next year I didn’t want to look back on my college career and think ‘what if I would have ran and won?’”

What is the best change you hope to make or adopt while student body president?
“One of the biggest things we’d like to get is more participation in events going on around campus. May that be athletic games, Greek events, or choir and band, we just want to get more students involved on campus. Incentives will play a role in how we’re going to get students to games and other events around campus. Those incentives may include the first 20 people to show up receive a T-Shirt. Little things like that. Whatever organization we are working with we’ll figure out an incentive at the time.”

What do you hope to get out of having a big leadership role?
“I want to leave a mark here at UNK. As I graduate from here I want people to say ‘Evan and Nick did a great job as student body president and vice president. They left their benchmark, left great incentives, great goals and did great things for this campus.’ I want to look back on that and say ‘Wow, we did what we wanted and we had a good time doing it.’”

How did you choose your running partner, vice president, Nick Stevenson?
“When I began thinking ‘oh, running may be a possibility, who do I want as my running mate?’ I thought Nick fit the part well. He’s a leader on campus. I can trust him with anything, and I think our styles of communication and leadership go hand in hand.”

What were you feeling when you heard there would be a run off election?
“It was eye opening and stressful. We were, at the time, very upset that after the first election we won the popular vote but didn’t get that majority vote of 50 percent, and it knocked us down a little. But I definitely think after a couple hours to let it sink in we definitely got back in the mindset of ‘well we’re here now, let’s finish the job.’”
Calhoun and Stevenson will be utilizing twitter to keep students and the public updated with information regarding what they’re doing on campus. Follow them on Twitter at @EvanandNick2015