KEARNEY – Two University of Nebraska at Kearney professors have been awarded a grant to conduct a digital history project documenting Kearney during World War II.

Assistant Professor of History Jeff Wells and Jacob Rosdail, associate professor of communications, are examining the history of Kearney Army Air Field and Kearney community through the digitization of items from the Buffalo County Historical Society Trails and Rails Museum.

The items consist of photographs and more than 3,000 pages of official Army Air Field government documents. “We are digitizing photographs assembled by personnel who were stationed at the air field and from community volunteers who have scrapbooks for us to digitize,” Wells said.

The project, called “Kearney Goes to War,” also includes transcribing and digitizing audio files from a reunion at the air field in 1988, when Buffalo County Historical Society volunteers conducted interviews with veterans.

“We’re going to add the (website) domain, and our domain is going to allow us to pursue a variety of digital history projects in the future,” said Wells.

The project is being funded through a $16,833 grant from the UNK Research Services Council and includes assistance from student workers. Digital archiving work is expected to be finished in April, and the new website will go live later this spring or summer.

Rosdail’s portion of the project – a documentary film – includes interviewing students involved as well as community members and others with connections to the Army Air Field.

“The current plan is to have a half hour documentary and several shorter films that will exist on the website … using (old photos and audio interviews) to tell the story of Kearney Army Air Field,” Rosdail said.

Wells and Rosdail became partners on the “Kearney Goes to War” project after meeting at a campus orientation for new faculty last semester.

“We talked about projects, and he was talking about how he was interested in looking for a community-oriented project for a documentary film. I was looking for a digital history project,” Wells said. “So we talked about what kinds of projects members of the community wanted and also how we could collaborate and work together.” 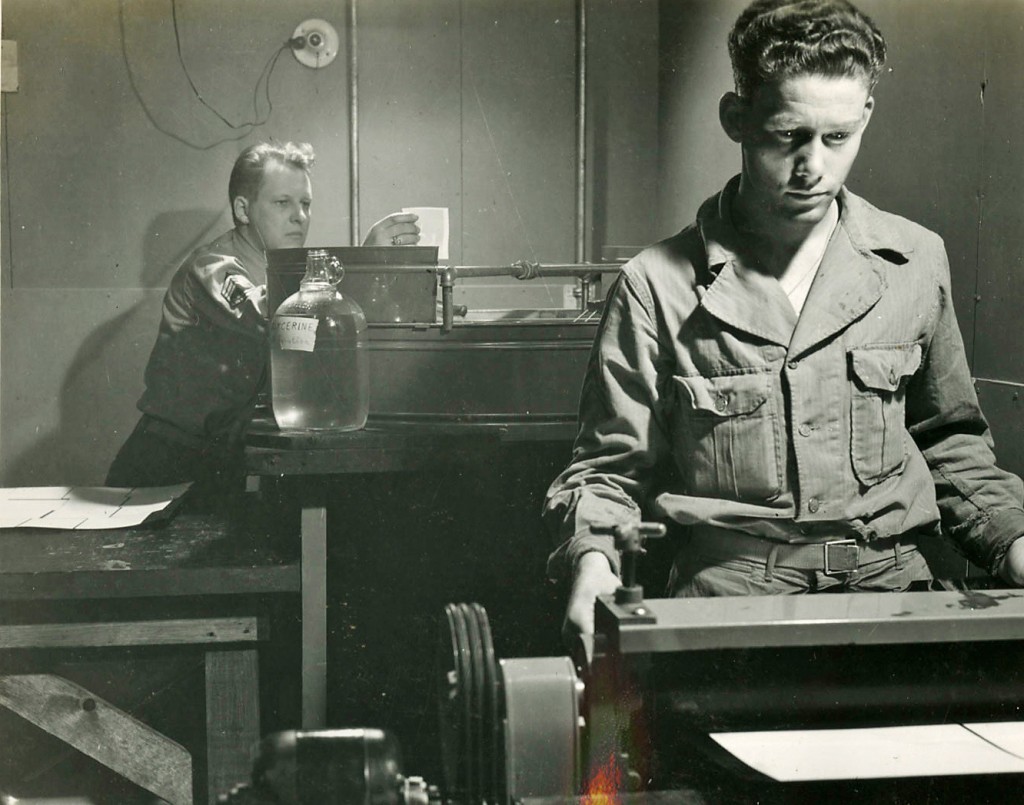 Wells further developed the idea for specifics of the project by working with Jennifer Murrish, executive director of the Trails and Rails Museum.

One of four UNK students involved, history major Jacob McGinley of Bruning became interested in helping with the digital history project after learning about it at a UNK career fair.

“I love to help with this stuff because it gets my foot into the door into getting into seeing these archives,” McGinley said. “If you don’t have experience in this type of field, it’s hard just to jump in. It definitely helps me in my career.”

Wells said that each student worker is assigned to work on one component of the digitization effort. One student deals with the government documents, one with audio, and another with photographs.

In addition to McGinley, UNK students helping with the project include: Aaron Ray of Gretna, Zach Waller of Kearney and Connor Dudley of Hickman. Wells said additional students in his digital history, online digital history and seminar in history courses are also involved.

Once “Kearney Goes to War” is complete, Wells said it will allow others to become involved and create a resource that will be useful for future research projects.

“The good thing about this is it’s laying the foundation for future digital history projects at UNK,” Wells said. “We are going to be able to start with this and then grow from here.”

Individuals with connections to, or stories about, Kearney Army Air Field who are willing to be interviewed for the “Kearney Goes to War” project should contact Jacob Rosdail at 308.865.8735 or Jeff Wells at 308.865.8898.