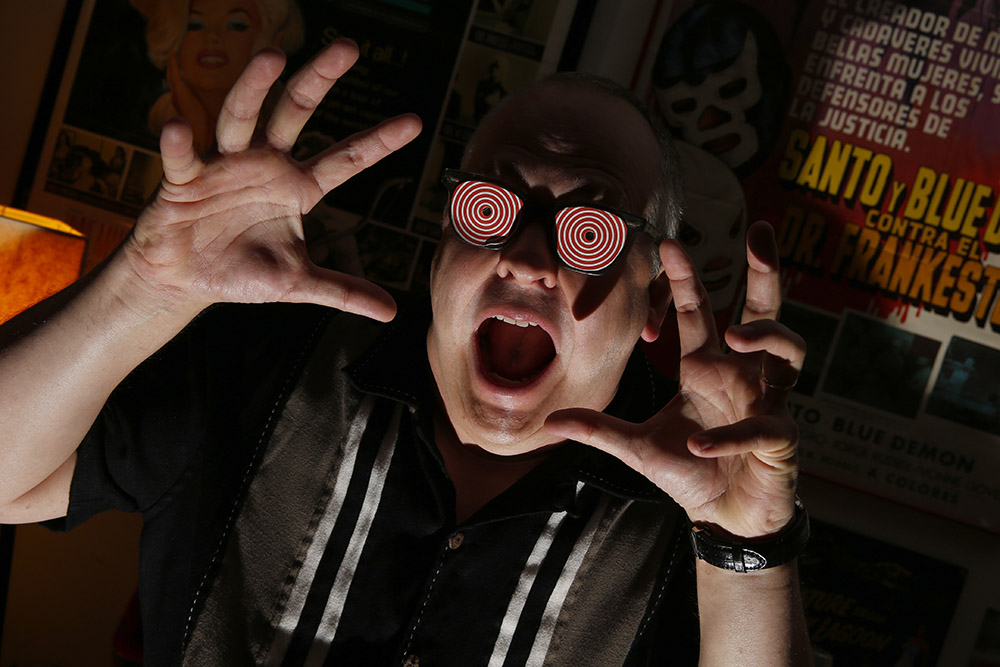 SEE – colossal destruction on a scale never before dreamed!

WATCH – a community unaware of its impending doom. Eating dinner, going to school, watching TV. Citizens who can’t be killed … because they were never alive!

THRILL – to shops, movie theaters, homes built in the shadow of atomic bombs set to rain terror from above. 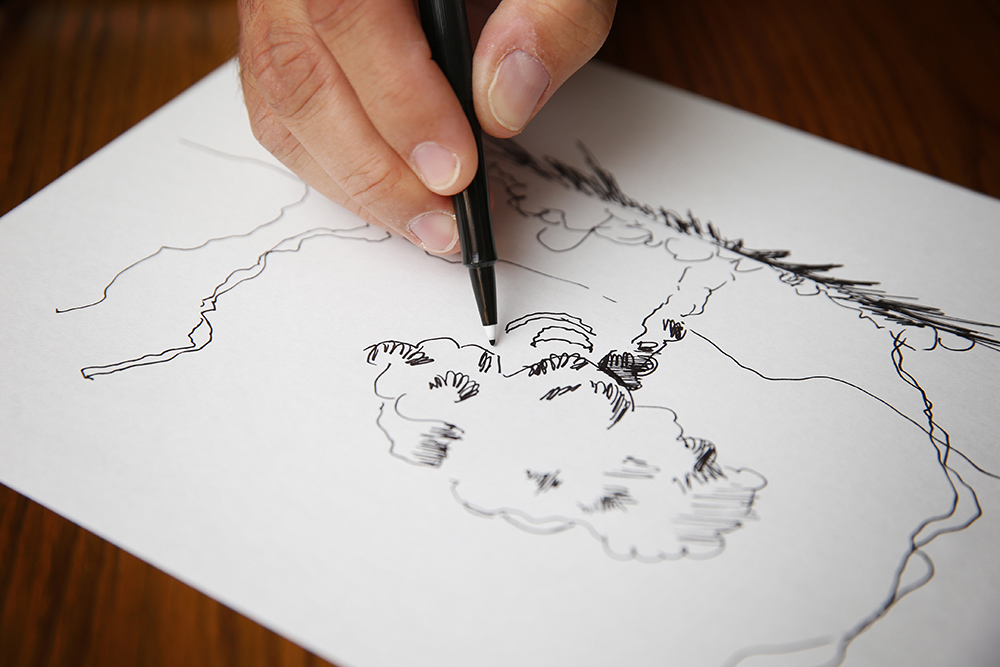 “Doomtown.” If the title of Doug Waterfield’s painting series sounds as if it belongs in the opening credits of a “B” movie, then the subject matter provides a perfect plot.

The images were inspired by the full-scale towns built by Civil Defense engineers at the Nevada National Security Site. Throughout the 1950s, the U.S. Department of Energy tested the effect of atomic weapons by dropping them on these towns.

Mannequins, clothed and posed in everyday scenes, were the towns’ only residents.

“That’s what was creepy to me, is that they would set up an entire town with cars, schools, business, homes – and they put furniture in all these places – and then they put people in the form of these mannequins, and then they lit ‘em up just to see what would happen to them,” said Waterfield, an art professor at the University of Nebraska at Kearney.

“Really? Was our understanding of atomic energy that low, that you weren’t really sure what the effects of an atomic bomb would be? You’re all going to die. That’s the effect.”

Previous art series have garnered both exhibitions and awards for Waterfield, who has been chair of the UNK art department since 2010, but he said “Doomtown” is his most successful.

“By far the greatest reception has been for this series,” he said.

Exhibitions have included the National Atomic Testing Museum in Las Vegas; the Rocky Flats Cold War Museum in Arvada, Colo.; and the Los Alamos Historical Museum in Los Alamos, N.M. Pieces from the series are now part of those collections. Waterfield has lectured on the series at museums in Omaha and New Mexico, and he did a 2012 interview with National Public Radio.

The 25 pieces are mostly acrylic and oil paintings, with some drawings. The flat, surreal images often juxtapose figures from everyday life against symbols of the atomic bomb. The series’ signature piece, for example, has the iconic mushroom cloud as a background for another icon of American achievement – the manmade oasis of the Las Vegas strip.

The contrasting symbols show how closely Americans’ power to create co-existed with its power to destroy. Waterfield stresses, however, that “Doomtown” is no social or political statement. It simply shows Americans dealing with the fear and paranoia that followed World War II, by making atomic bombs into something they could study, celebrate, and even control. 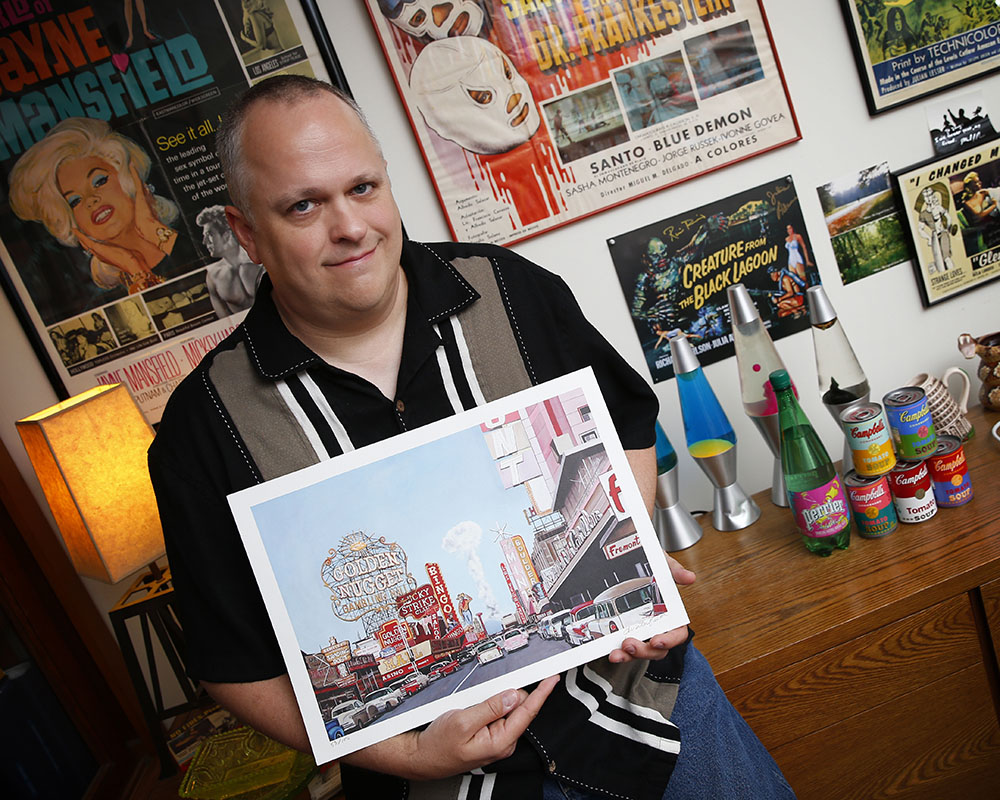 “(The series is) not a political statement. It’s more of a historical enlightenment sort of thing. Because it’s pretty easy to have a political statement about the atomic bomb. It’s kind of cut and dried,” he said. “But the aftermath of the testing was what was interesting to me. How Americans incorporated it into their culture, and turned it from this scary thing that kills thousands and thousands of people to this thing that makes giant lizards and turns people invisible. Almost into something that’s not real.”

“Doomtown’s” inspiration was Waterfield’s fascination with monsters; an interest on display for anyone who visits his office. Posters from old monster and horror movies, many of which he’s restored, cover the walls. Glow-in-the-dark zombies line a windowsill, part of the hundreds of kitschy collectibles in the room. He has over 3,000 celebrity autographs and is quick to point out his favorite – a framed photo from “Gilligan’s Island,” signed by every cast member and the show’s creator, Sherwood Schwartz.

“I always love counterculture and lowbrow things and tacky things. I like fun things, things that are fun in the world. I’m the type of guy who will take a trip and pull over to every roadside attraction with a fiberglass dinosaur, or snakes to see, or a two-headed cow,” he said.

The 1950s, with its over-the-top culture, was a natural research subject.

Social concerns related to atomic weapons and the rise of Communism have only been a theme in his art for six or seven years, Waterfield said, but his research actually began in childhood.

“My father was a shift worker when I was a kid and I didn’t get to spend a lot of time with him, and the time that I did spend he just liked to sit on the couch and watch TV. And one of the things he liked to watch was these old monster movies from the ‘50s and the ‘60s and the ‘40s,” Waterfield said. “So that was kind of a way that he and I bonded. We would sit and watch these movies together. You know, Friday night recap movies, ‘Elvira’ and junk like that.”

As an artist, Waterfield turned toward a subject he knew well – monsters. He began researching the origins of movie monsters, such as Godzilla. He found that “radiation, this magical thing called radiation, was the source of their monsterness, and later on it’s the source of superhero powers for a lot of comic book heroes.”

So he learned about radiation, which led to research on atomic testing and his discovery of the doom towns.

Photographs and footage of the blasts became inspiration for images such as “The Technicolor Dinner Party,” which shows mannequins in cocktail dresses and suits, sitting at a table set with china and crystal. That’s how detailed engineers were, Waterfield said, because they wanted to find out what atomic weapons would do if dropped on actual American towns.

That’s how real the threat of annihilation was for Americans then.

The mannequins, though, didn’t give the government any data on what the blasts would do to humans. “Which is why they also used pigs, pigs that they would even dress in human clothes to see what the effects would be, the burn marks,” Waterfield said. That fact inspired his painting “All the Little Piggies,” with swine surrounding an upright bomb.

Waterfield finished a few paintings, then visited the Atomic Testing Museum. Arranging for an exhibit there led him to realize that his work was a natural fit for science museums. 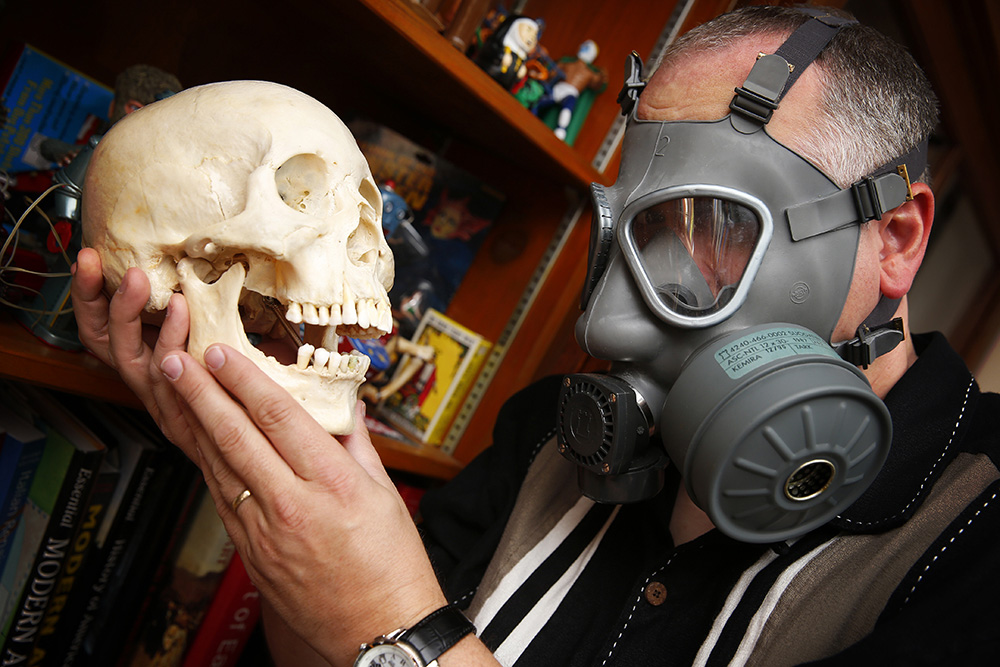 “I can bridge the gap between art and science, and a lot more people will see my work in a science museum than they would in an art museum,” he said.

Waterfield has since visited the Nevada National Security Site and related spots, such as the ghost town of Mercury, Nev., which housed workers for the atomic tests.

He credits the success of “Doomtown” to the sincerity of the work.

“I think it’s the first series I have dealt with that’s really personal for me. It’s something that I was interested in doing, it wasn’t something I was doing to try to sell, or to try to be impressive or something like that,” he said.

Childhood also led Waterfield into his newest series, “Halloweentown,” which features images of Halloweens past. He’s used not only his own memories of trick-or-treating to create the paintings, but other Halloween photographs from the 1960s.

“It seems like the further back you go the creepier the costumes get,” Waterfield said, and so the paintings have taken on a creepy quality, too. “One of the things I just happened upon was the photographer’s shadow appearing in the photo,” he said. So, he began incorporating that into the paintings.

Waterfield intends for “Halloweentown” to tell more of a narrative and have more mystical themes than “Doomtown,” but the projects share a time period, and some symbolism. Some new works even have mushroom clouds in the background.

“They just keep popping up when I least expect it,” he said. 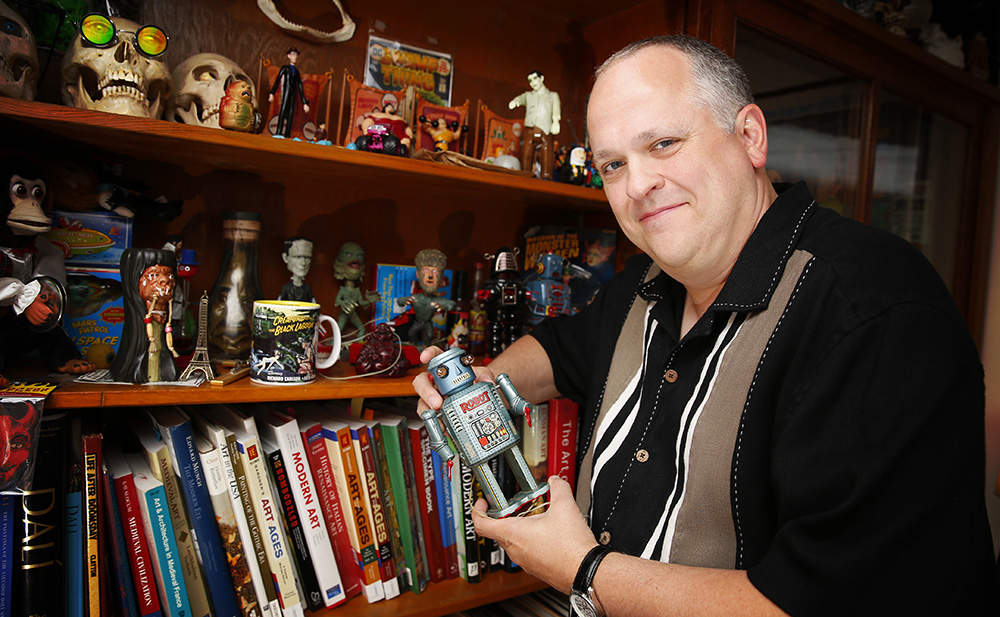 “Doomtown Part II” is also a work in progress. Waterfield said he’s done preliminary research for that follow-up series, and venues that exhibited “Doomtown” are interested in showing the second part as well.

“It is going to be less about the testing and more about the later consequences in our culture; bomb shelters and more monsters,” he said, adding that it’s important to document that time through art.

“All of those aspects are things that just fascinate me, and they’re completely gone from our culture today. We don’t fear atomic testing anymore, we don’t build bomb shelters, we don’t have fallout shelters that everyone go and assemble in, so that was enough of an impetus for me to create this series just to educate, especially young people who don’t have any idea,” he said. His students rarely know about the atomic testing, or the Cold War, when those subjects come up in class discussion, he said.

But for some people, the 1950s are still a living memory.

“Every time I go and visit and I talk to older people, they always have a story,” Waterfield said, whether they spotted airplanes for civil defense, or just hid under desks during “duck and cover” drills. “These people are going away. Who’s going to tell the story once they’re gone?”

Ultimately, Waterfield said, he wants his paintings to tell the story of that America.

“I hope they’re telling part of the story. Revealing part of that history that is normally not covered,” he said.  “Like the Las Vegas connection for instance, the fact that most of those tests happened about 75 miles north of Las Vegas, and people could see them from Las Vegas.

“They would have rooftop cocktail parties where everyone would go up and they would count down, and then drink their atomic cocktails, and have their beauty pageants, and turn it into a fireworks display instead of a weapon that could kill hundreds of thousands of people.”

The Miss Atomic Bomb pageant – what a blast. 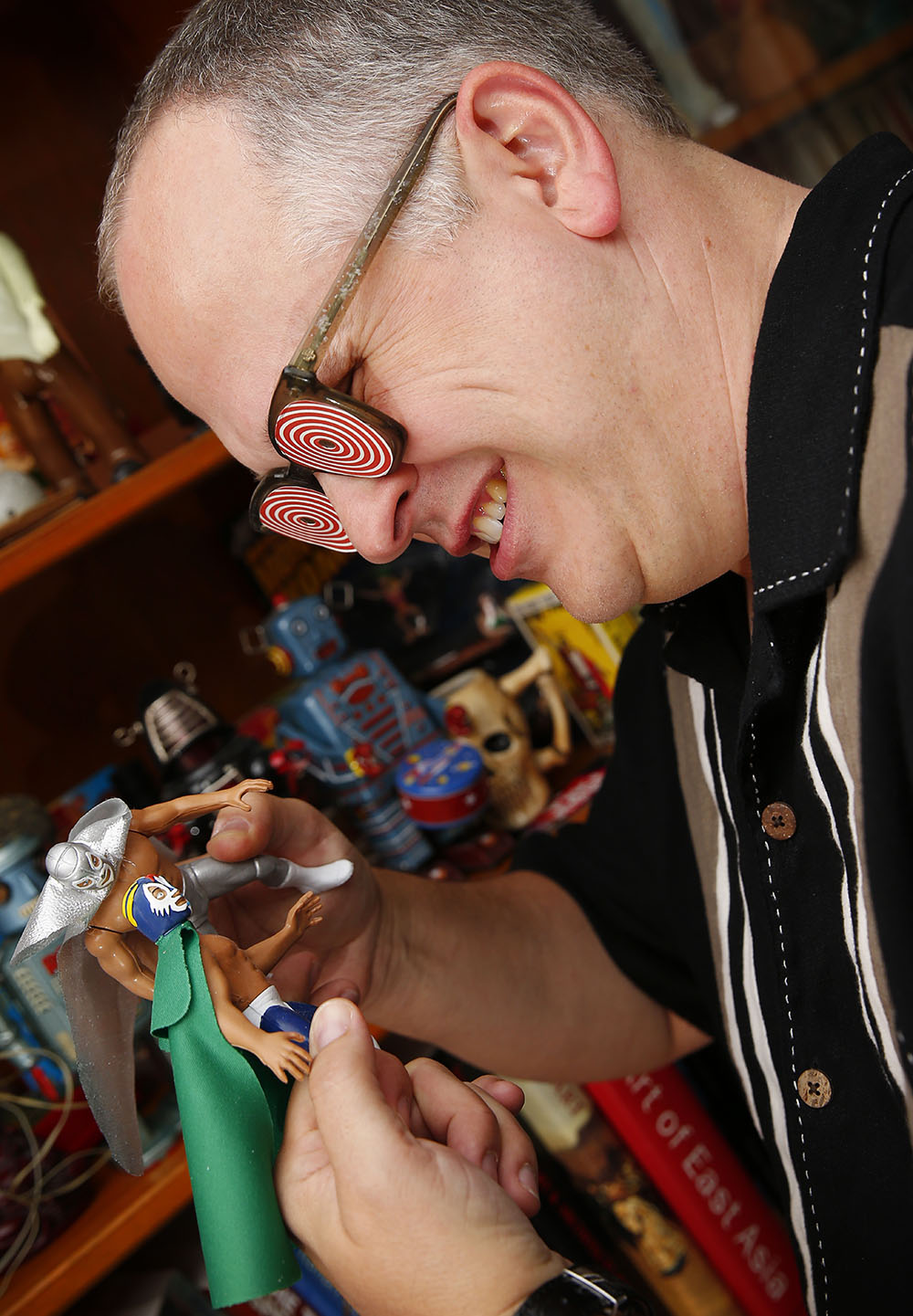