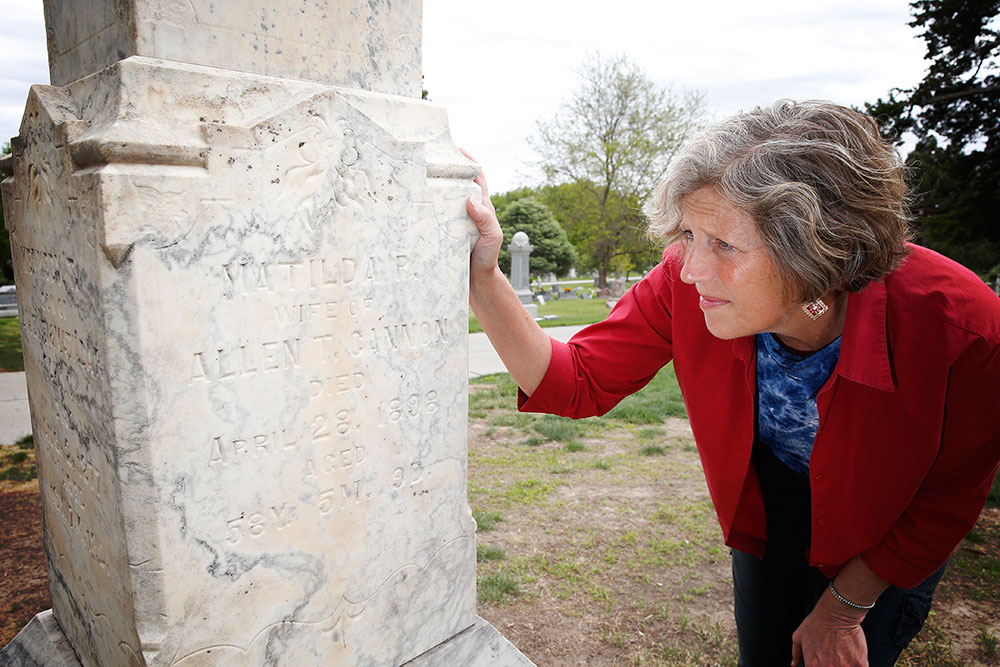 As Carol Lilly walked through a cemetery in former Yugoslavia, she couldn’t help but be fascinated by the elaborate gravestones all around her.

Speaking with locals, she was struck by the emotional intensity with which they spoke about the destruction of the grave markers in their communities.

Seeing the physical and emotional impact the Yugoslav wars had on cemeteries sparked an immediate interest in Lilly, and years of research have followed.

Lilly, director of the International Studies Program and a history professor at the University of Nebraska at Kearney, is investigating cemeteries as sites of national identity in the former Yugoslavia, beginning with the Communist takeover of power in 1945 through the Yugoslav wars and dissolution of Communism in the 1990s.

“Although we don’t normally think about cemeteries in terms of conflict, a variety of conflicts – religious, ethnic, class or political – can be manifested in cemeteries and on grave markers.

“Perhaps the most violent of these is the desecration of cemeteries,” said Lilly.

Less obvious evidence of conflict appears in the form of segregation of or within cemeteries, banning or enhancement of certain burial rituals or the placement of symbols on gravestones.

• The policies and propaganda of the Communist party of Yugoslavia designed to secularize and create unified all-Yugoslav cemeteries.

• How national or religious identity appeared on the gravestones of individual Yugoslav citizens from 1945-95.

• The desecration of graves in the wars of the 1990s, and its symbolic significance.

“It is rich terrain for such research thanks to the extraordinary variety of ethnic and religious groups, as well as political conflicts, active in the region during the period,” Lilly said. 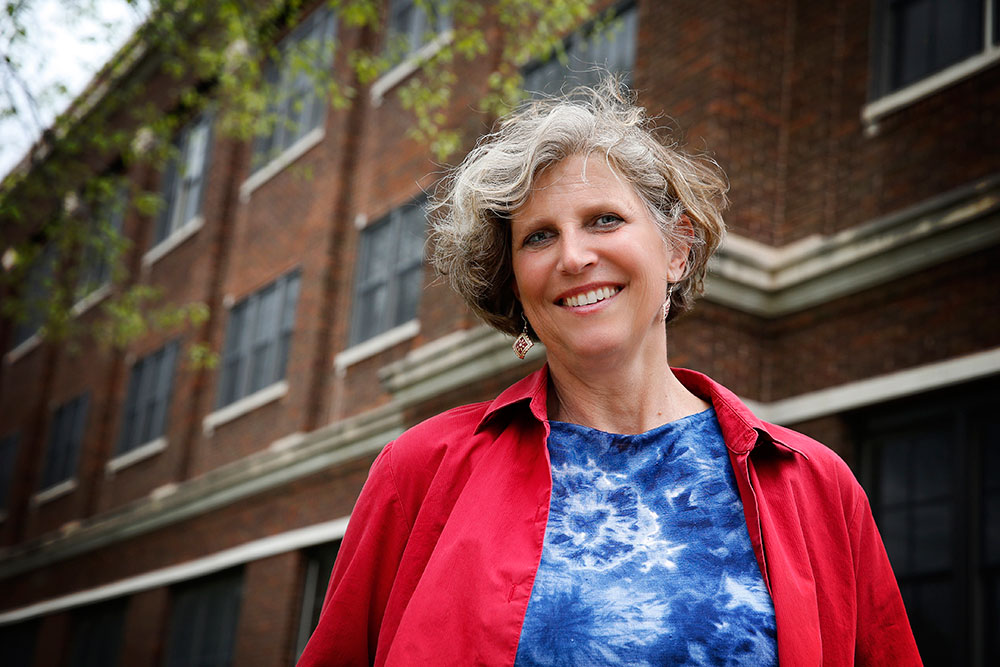 A Colorado native, Lilly began her post-secondary education with the intention of finding a career that would enable her to explore the world.

“I always just wanted to travel. That’s all I ever wanted to do,” she said. “I was always thinking of ways to get a job that would allow me to travel. So I started studying foreign languages.”

Lilly earned her bachelor’s degree from the University of Colorado Boulder, where she majored in Russian language and Russian and East European Studies. During her studies, she visited the Soviet Union. It was there that she decided to change her focus to Yugoslavia. She first traveled to Yugoslavia in 1984.

“I ended up going to graduate school with a focus on Yugoslavia, not realizing it would end up with a nasty civil war breaking apart the country.”

She earned her Ph.D. from Yale University in 1990.

Lilly eventually learned how to speak Serbo-Croatian, the South Slavic language and primary languages of Serbia, Croatia, Bosnia-Herzegovina and Montenegro.

It was in the late ’90s when Lilly was doing research in a cemetery in Yugoslavia that she became enamored with gravestones.

“I just couldn’t help but be struck at how personal and how fascinating some of these grave markers were and how they changed over time.”

She recalled one gravestone that featured a photograph of a young man sitting at a table with his shirt off and his hands behind his head.  The photo seemed inappropriate in the setting of a cemetery and she wondered what would make a family choose it for his grave marker.  But it seemed likely that the young man had died in the most recent nationalist conflicts and it was somehow associated with his role in them.

“I started thinking about cemeteries and gravestones as sites of identity, and in particular of national identity associated with ethnic conflict.”

She also saw the war’s effect on cemeteries, which made her think about the ways they have been used as a tool of ethnic conflict.

It was then that she began forming ideas for her research project. 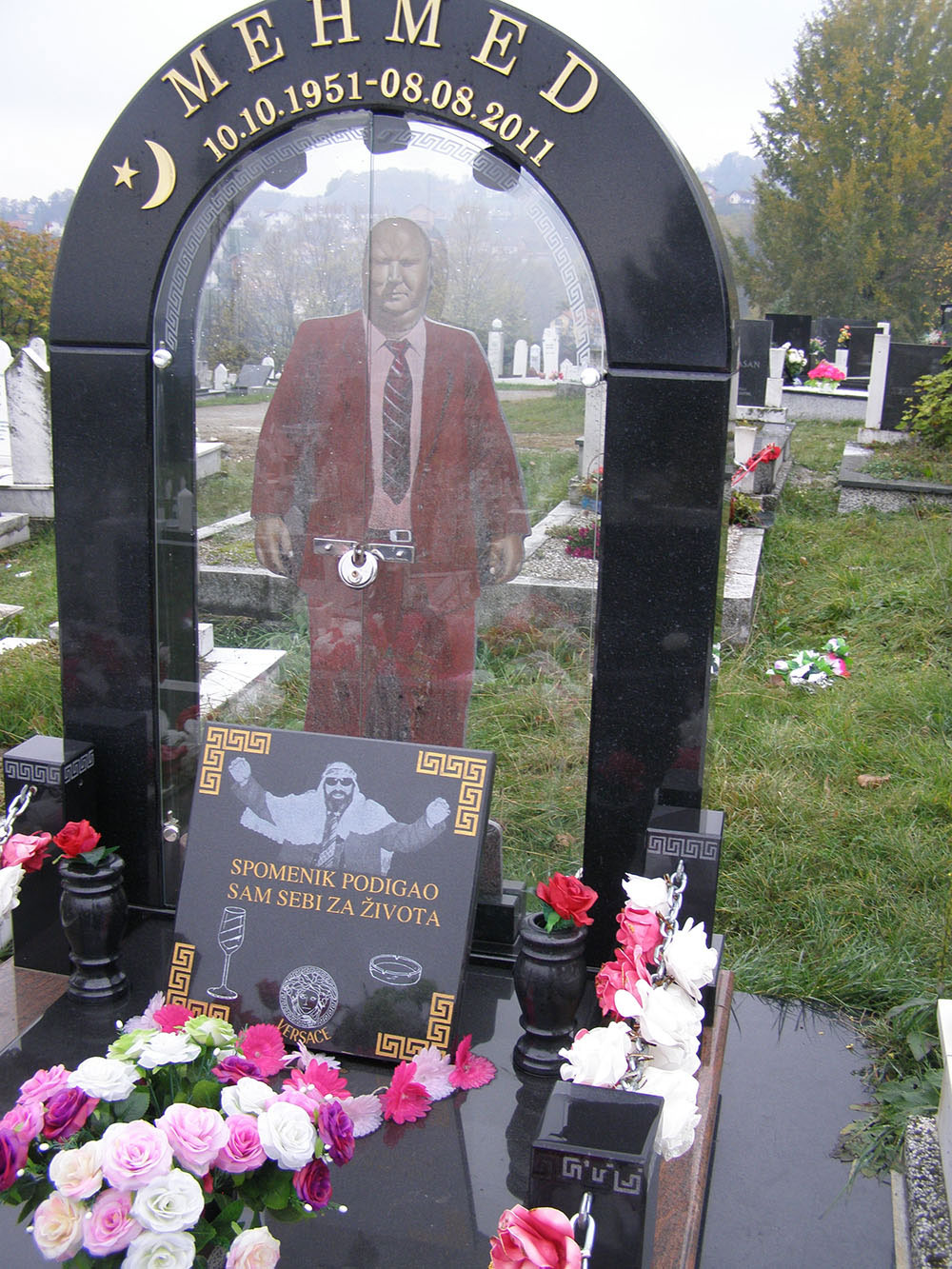 RESEARCH AMONG THE DEAD

Although Lilly began thinking about Yugoslavian cemeteries during her trip in the late ’90s, it wasn’t until a decade later that she began her research.

Since she was fluent in Serbo-Croatian, Lilly chose to keep her research focused in countries where she could communicate: Serbia, Bosnia-Herzegovina and Croatia.

Her first research excursion was in Serbia, where she began digging through archives at the Commission for Religious Questions.

Of course, gravestones are most often used as a way to indicate the religion of the deceased displaying the symbols associated with religion:  Yugoslavia is a multi-ethnic and religious country that includes Catholicism, Serbian Orthodoxy, Islam and Judaism.

Lilly thought that she would discover documentation on a Communist takeover of cemeteries during the war – Communists turning religiously organized cemeteries into secular cemeteries.

But she found that the Communists weren’t successful in taking over all cemeteries, even as late as the 1990s. Most cemeteries in rural areas remained in the hands of religious organizations.

This discovery meant that Lilly would have to expand her research from the three main capital cities – Belgrade, Serbia; Sarajevo, Bosnia; and Zagreb, Croatia – to small villages.

During her four trips to former Yugoslavia in the past four years, Lilly has scoured archives and taken thousands of photos of gravestones.

“It just gets better every time. There are so many phenomenal aspects to this project,” she said.

She is particularly interested in evidence of mixed marriages on grave markers and of how soldiers are memorialized on gravestones. 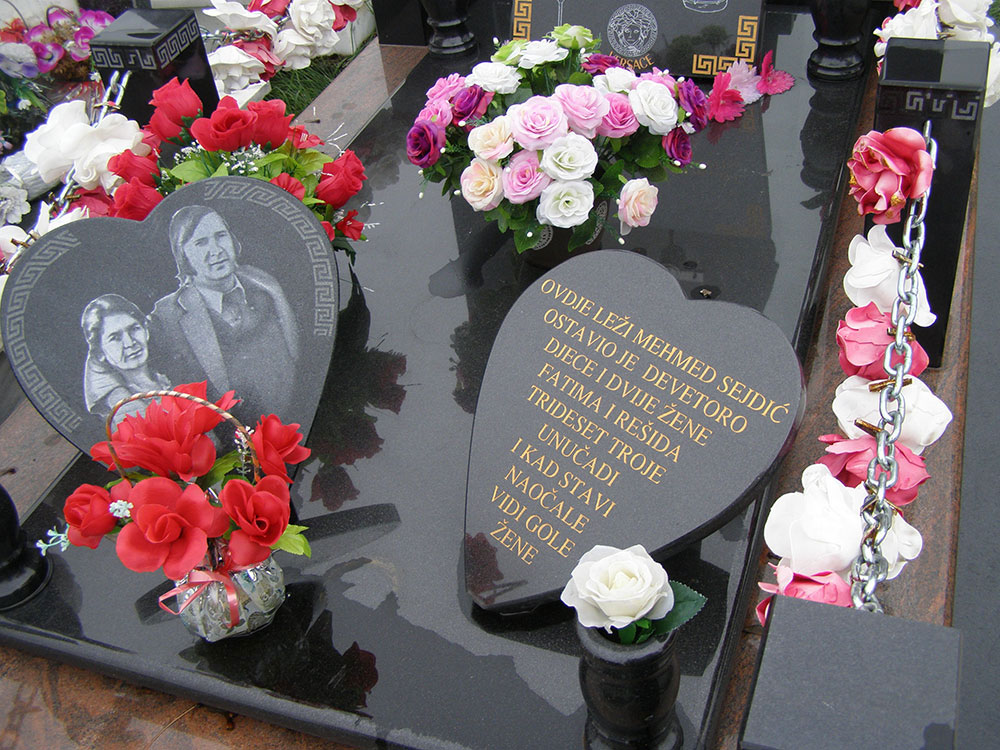 In Bosnia, the state provides gravestones to soldiers who have died. That’s not the case in Croatia or Serbia. Croatians use insignias, flags and heralds to indicate loyalty to the country. Serbs often construct life-size etchings of soldiers with long sentimental epitaphs that describe the fallen soldier.

Another aspect Lilly finds fascinating is how personal identity is expressed. When photographs were first used on gravestones, the photos were old fashioned with a sense of nationalism. In the 1960s and ‘70s, the photographs became more like driver’s license pictures.

“Then in the 1990s, people started using really interesting pictures that expressed people’s personalities, what they did for work or as their hobbies. In that process, they sometimes reveal an intimacy that moves beyond what seems appropriate for the setting, as noted previously with the young shirtless man, or photos of women in low cut dresses.” One gravestone Lilly found clearly showed the interests of the deceased as wine, Versace and cigarettes.

In addition, gravestones in this part of the world are often expressions of wealth and status. “Even some people who are not very wealthy will put enormous amounts of money into their gravesites. In some places, they build miniature houses on top of the graves,” Lilly said.

People may feel a strong obligation to erect an ornate gravestone and take care of their loved one’s gravesite because burial places aren’t purchased in former Yugoslavia, they are rented. Gravesites are often rented for 10 to 30 years. When the rental period is up and the lease isn’t renewed, the remains are removed and the monument is returned to its owners.

But Lilly isn’t sure that’s the reason people create such dramatic monuments for the dead.

“In America, we have a very mobile society. We have relatives who live all over the country. In this part of the world, most people stay where they are.” 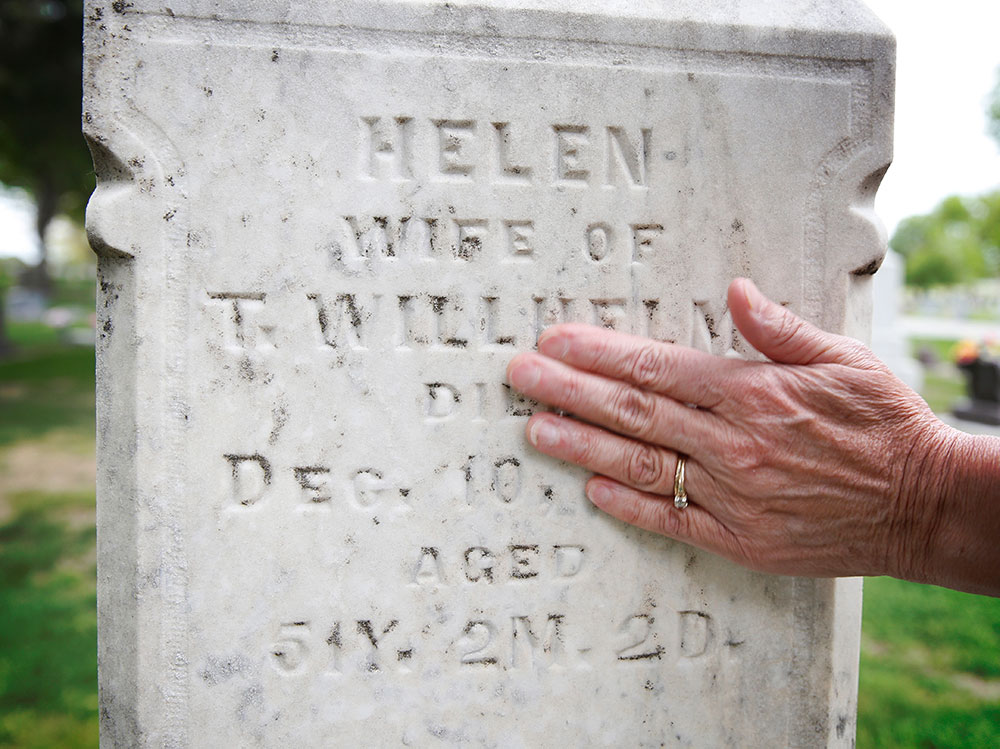 With thousands of photographs of gravestones and cemeteries, Lilly must now find out their symbolic significance.

“It’s been hard finding documentation of any of this,” she said. “Nobody has done anything like this regarding multi-ethnic countries, so it’s hard to find documented evidence of what I see. That’s probably the most challenging aspect to all of this.”

Lilly’s next step is creating digital mapping of her findings at the nearly 50 cemeteries she has visited. She eventually intends to write a book about her ongoing discoveries.

But in the meantime, Lilly will continue wandering through the cemeteries studying the extravagant and symbolic gravestones in Serbia, Croatia and Bosnia. 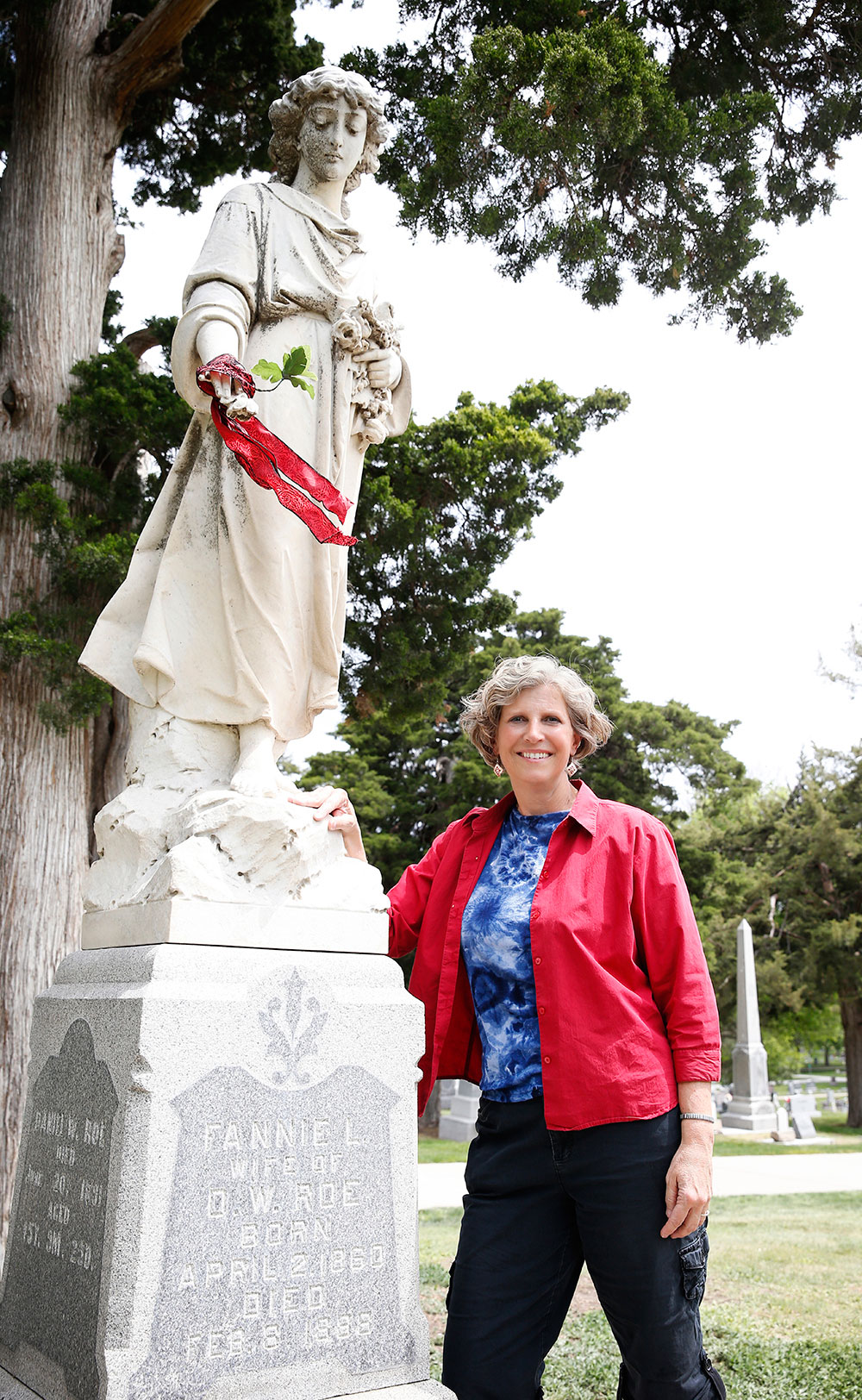 CAROL S. LILLY
Title: Professor of History, Director of International Studies Program
College: Natural and Social Sciences, Department of History
Education: Ph.D. in History, Yale University, 1990
Years at UNK: 22
Family: Husband, Rick Garvue; daughter, Daniela Garvue; son, Max Garvue.
Hobbies/Interests: Horseback riding, travel, cross country skiing, hiking, reading.
Courses taught: Soviet Union, Modern Eastern Europe, Gender and War, Imperial Russia, Fascism and Communism, International Communism, Stalinist Russia, Western Civilization.
Honors/Awards: 2014 Pratt-Heins Award
Areas of research/specialization: “A variety of conflicts – religious, ethnic, class or political – can be manifested in cemeteries and on gravemarkers.  Perhaps the most violent of these is the desecration of cemeteries, but other less obvious manifestations include segregation of or within cemeteries, banning or enhancement of certain burial rituals, and the placement of symbols on gravestones, which may show a greater degree of political, national or religious affiliation in times of open conflict.
“My research focuses on precisely these kinds of conflict in the former Yugoslavia, during the communist era beginning in 1945 up through the wars of dissolution in 1995. It is rich terrain for such research thanks to the extraordinary variety of ethnic and religious groups as well as political conflicts active in the region during the period.”
Recent Publications:
• “Right Wing Leaders in Serbia,” Women of the Right: Comparisons and Exchanges Across National Borders, Penn State University Press, 2012
• “Natalija: Life in the Balkan Powderkeg,” Central European University Press (paperback edition, 2011; hardback, 2008)
• “Negotiating Interests: Women and Nationalism in Serbia and Croatia, 1990-1997,” East European Politics and Societies 16:1, 2002
• “Power and Persuasion: Ideology and Rhetoric in Communist Yugoslavia, 1944-1953,” Westview Press, 2000
• “State-Society Relations in Yugoslavia, 1945-1992,” St. Martin’s Press, 1997