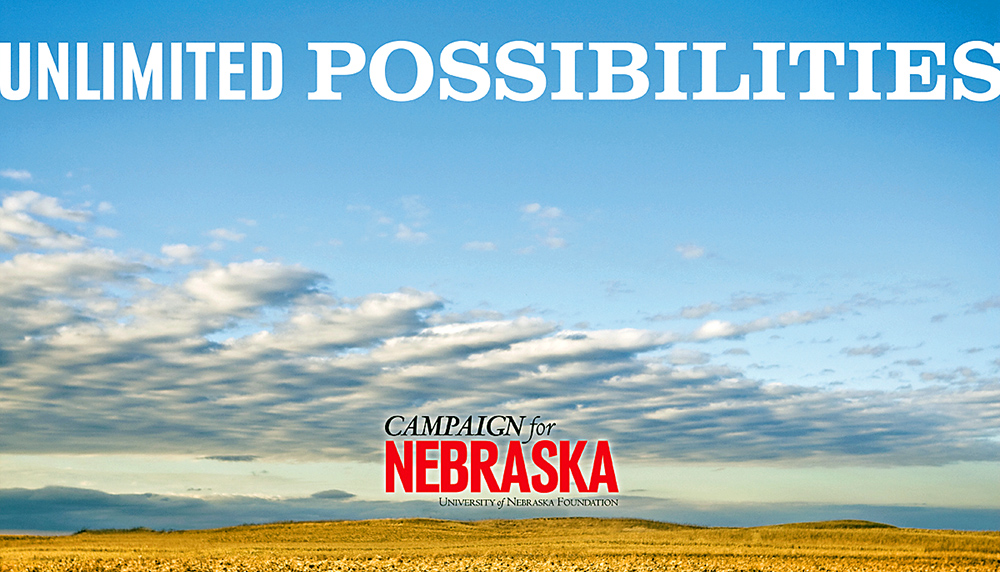 KEARNEY – More than .8 billion in private donations was collected by the University of Nebraska Foundation during its Campaign for Nebraska: Unlimited Possibilities campaign, which began in 2005 and concludes Dec. 31.

The amount is 50 percent more than the .2 billion goal set for the campaign and includes a record 8 million in the fiscal year that ended June 30 – the best fundraising year ever in the foundation’s 78-year history.

The nine-year campaign raised .7 million for the University of Nebraska at Kearney, with more than million committed to scholarships and .3 million for UNK Athletics scholarships, Ron and Carol Cope Stadium and the UNK Loper Fund.

“The Campaign for Nebraska is making a profound difference for the University of Nebraska at Kearney. In terms of scholarship assistance, university doors are opening a little wider, are including greater numbers of promising and deserving students than before,” said UNK Chancellor Douglas Kristensen.

“In terms of bricks and mortar, we are in a better position to increase our impact. This past spring, for example, UNK broke ground on a Health Science Education Complex, a project that represents a unique and exciting collaborative venture with the University of Nebraska Medical Center that is destined to benefit health care in rural Nebraska and throughout the state and region for generations to come.”

Charles Bicak, senior vice chancellor for academic and student affairs at UNK, said the campaign has been “utterly transformative” for the UNK campus. “The influence on the well-prepared graduate as he or she returns to communities from one end of the state to the other, in a professional capacity, is tremendous.”

Monday’s announcement of the success of Campaign for Nebraska comes on the heels of consecutive record-breaking years for private giving to the University of Nebraska. Alumni, friends and organizations gave a record 8.1 million this year, representing a 9 percent increase from last year’s record of 6.7 million donated.

“It is because of the passion, generosity and commitment of our donors, volunteers and friends – not to mention the thousands of students, faculty and staff who are the lifeblood of this university – that the Campaign for Nebraska has been such a tremendous success,” said Brian Hastings, CEO of the University of Nebraska Foundation.

“They have seen, as I have, that something special is happening at the University of Nebraska, and they’ve wanted to be a part of it. Together, they have proven that the possibilities for the university really are unlimited.”

More than 97,000 individuals and organizations gave during the campaign, more than half of whom were first-time donors to the university.

“Our work in making a college education more affordable for students, attracting talented employees, developing world-class facilities and building a global reputation for the university in areas important to Nebraskans and others continues, but it has been greatly enhanced over the course of this campaign,” added Linder.

Fundraising for Campaign for Nebraska began in 2005, and the campaign was publicly announced in 2009. It is the third major campaign the foundation has conducted. The previous effort, Campaign Nebraska, ended in 2000 and raised 8 million.

The campaign has focused on nine priority areas for the university. Student support was the highest priority, and donors contributed more than 5 million for scholarships, fellowships and other forms of student support.

Faculty support was another key priority, with million given to create nearly 200 new funds for endowed chairs, professorships and other forms of faculty support to help the university to recruit and retain top talent.

The university also has set a goal to expand opportunities for global engagement, including growing participation in study abroad programs and attracting more international students.

Additionally, the campaign has focused on academic areas where the University of Nebraska has a history of excellence and is in a position to have a global impact. They include water for food, cancer research and care, early childhood education, agriculture and life sciences, business and information technology, and architectural engineering and construction.