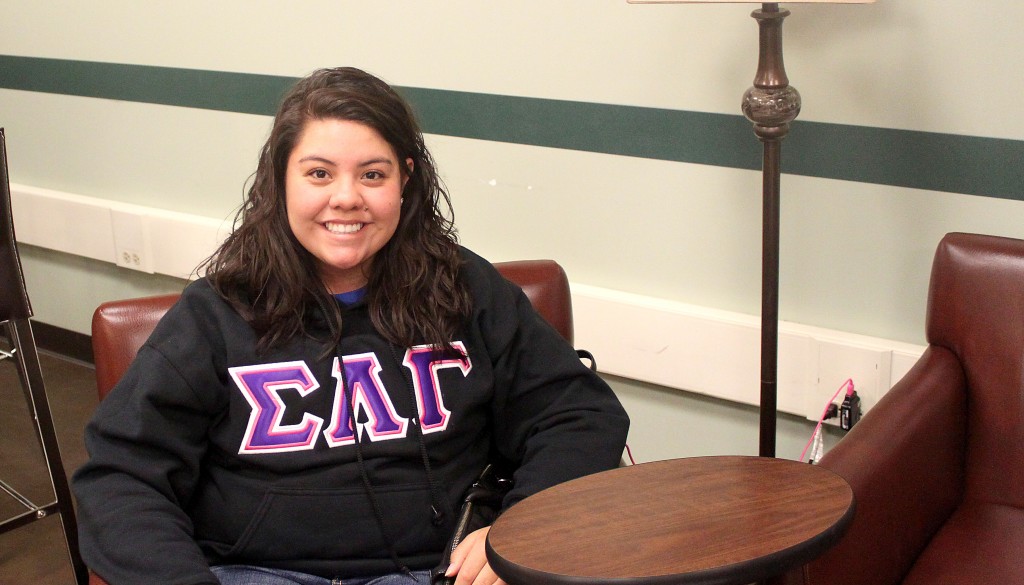 KEARNEY – Noemi Murillo’s path to nursing school has not been easy.

She moved to the United States at age 3 from Michoachán, Mexico, where she was born and her parents had lived their whole lives. Her struggles began when she started elementary school.

“I was not learning at the same speed as my other classmates because I did not understand the English language,” said the University of Nebraska at Kearney senior from Lexington. “I was always afraid to do stuff because of not knowing what was going on.”

She found it difficult to interact with her classmates, and she often did not join conversation because she did not understand the language.

In first grade, while other students participated in the reading block, she was sent to a different teacher to take English as a Second Language (ESL) classes.

“At that time, I didn’t understand what it was,” Murillo said. “I knew that my classmates were divided up into different reading classes, where they would sit down with their tote of books and read. I couldn’t do that because I did not know the English language. At that time, I saw it as a separation from my other classmates for being different.”

She now realizes the benefit of that separation, as that individual instruction played a big role in helping her learn English.

“If they assumed that I could learn with the other students, I probably would have struggled,” Murillo admits.

Murillo’s shyness continued in high school, and she did not attempt to make new friends.

“I stuck to my group of friends all the time – my comfort zone,” Murillo said. “Academically, I was very on top of stuff. I was pretty much a straight A student in high school and rarely had a B.”

Still, she struggled with confidence. “It was just being able to stand up for myself. If I didn’t agree with something, I usually just kept my mouth shut because I was afraid of rejection by other people.”

“Once I actually received the news that I had been granted the scholarship, that was just like a door that had been opened for me. I could see my future,” said Murillo, a Spanish translation/interpretation and pre-nursing major.

Noemi’s parents were especially excited for her opportunity to attend UNK.

“My parents didn’t have very much,” Murillo said. “They only attended up to sixth grade before they were basically put to work. They want me to have a better life than they had.”

Next fall, Murillo will enter the University of Nebraska Medical Center College of Nursing program on the Norfolk campus. The journey, she says, has been transforming.

“It’s bittersweet. I wish there was more time left because I feel like, now as a senior, I have really stepped up into leadership roles,” she says. “But at the same time, I know it is time for me to move on.”

“Noemi started at UNK as a very shy student who was unsure of herself,” Harvey said. “By getting out of her comfort zone, she has grown into a leader who has had a positive influence on many students and within many organizations,” Harvey said. “ … I am so proud of her for taking risks, holding herself to a high standard, and giving her time to others through opportunities while at UNK.”

Said Seeba: “Noemi is a perfect example of what makes UNK so great. She came to UNK in 2010 as a shy and reserved individual, but will depart to UNMC as an outgoing and vibrant leader. She stands as proof that those who put in the hard work and dedication can achieve their goals.”

Murillo’s campus involvement includes serving as a mentor for 11 students who are part of the Thompson Scholar’s Learning Community. She has made the dean’s list and also works as a student diplomat, giving tours to incoming students.

“She’s a hard worker, a go-getter, a helper, a leader and a fantastic person,” Pierce said. “Most of all, though, she has done so much to show students who come from first generation families that there really isn’t anything they aren’t capable of doing if they put in the time and effort to get where they want to go. I am incredibly proud of her for that.”

Murillo’s advice to other students in situations similar to hers?

“Never think that just because you don’t have the money to go to college, you can’t. There is always a way. You just have to seek your resources. Sometimes it takes time. It’s not easy, but it’s well worth it. If anyone ever wants to go to college, and they don’t feel they can, they can. They just have to keep persevering and never give up.”