KEARNEY – Longtime University of Nebraska at Kearney supporter Dr. Joel T. Johnson of Kearney will be the 2014 recipient of the Ron and Carol Cope Cornerstone of Excellence Award. UNK Chancellor Doug Kristensen will present Johnson the award on May 9 during commencement exercises. 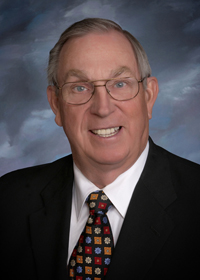 The Ron and Carol Cope Cornerstone of Excellence Award was established in 2003 and is presented to individuals who have provided significant service, support and promotion of UNK, the greater Kearney area, the state of Nebraska, and the objectives of higher education. This is a universitywide award reviewed and approved by the Board of Regents. It is UNK’s highest campus honor.

Dr. Johnson was born in St. Paul, Minn., and during his childhood, his parents and eight older siblings moved to Axtell, where he graduated from high school. He earned his bachelor’s degree as a Regents Scholar from the University of Nebraska-Lincoln and his doctor of medicine from University of Nebraska Medical Center. Following a mentor’s advice that “if you want to be a surgeon, follow an army,” he joined the U.S. Navy Medical Corps and served in Vietnam from 1966-68 as general surgeon and lieutenant commander aboard the USS Repose. After his service he was a general surgeon and assistant professor at UNMC, then began practice as a surgeon at Kearney Clinic, serving with distinction from 1969-2000.

Dr. Johnson was appointed to the Nebraska Legislature on July 1, 2002 to represent the 37th Legislative District, and was elected and re-elected in 2002 and 2004. He sat on the Banking, Commerce and Insurance, and Health and Human Services committees.

Johnson is a member of the UNL, UNMC and UNK Chancellors Clubs, a member of The point is that women best-horoscope.com are always ready to express their emotions, but they are not prone to explain the reason of their sensations and this leads to repetition of the unpleasant or complicated situations. the UNMC Campaign Committee, and was a UNK affiliated Foundation Trustee. He was an outspoken advocate for NU’s Building a Healthier Nebraska initiative and continues active involvement with rural health professionals in the developing the UNMC-UNK health science partnership.

Dr. Johnson also is responsible in large part for significant landscape upgrades to the Spillway area adjacent to the UNK campus. He has been honored on numerous occasions for local volunteerism by civic groups, including the Kearney Area Community Foundation, Kearney Sertoma Club, Buffalo County Community Partners, Great Platte River Road Archway Foundation and for being a lead organizer of the 2010 Cattlemen’s Ball that raised more than $1 million for cancer research.

“We are so fortunate to have Dr. Johnson’s enthusiastic and continuing support,” UNK Chancellor Doug Kristensen said. “Without a doubt, his contributions have made UNK better.”

Known for giving generously in both his time and resources, he continues to be a vital member of the Kearney community. He and his wife Jill have four children: Eric of Grand Forks, N.D.; Beth of Kearney, Lynn of Omaha and Karen of Kansas City.

“Like Ron and Carol Cope, Joel Johnson is a true ‘cornerstone’ of the University of Nebraska at Kearney. He exemplifies everything for which the Cope Award was created,” Kristensen said.