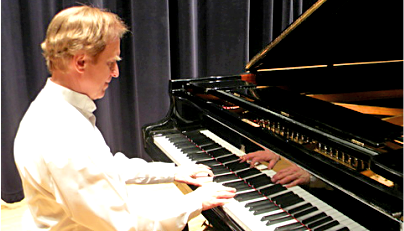 KEARNEY – UNK Professor of Music James Cook will present a faculty piano recital at 7:30 p.m. May 5 in the University of Nebraska at Kearney Fine Arts Recital Hall. His program is dedicated exclusively to the piano works of Frederic Chopin.

Cook’s specialization in Chopin developed during his doctoral studies at the University of Texas at Austin.

“No other composer has written works similar to those of Chopin. His music is entirely unique. I never cease to be amazed by the melancholic beauty of Chopin’s melodies and harmonies,” Cook said.

Cook has received many awards at UNK and has taught numerous piano students who have gone on to complete master’s and doctoral degrees.

While president of the Frederic Chopin Society of Poland, Bukowska invited Cook to Poland to present a special recital at the F. Chopin Academy of Music in Warsaw. Subsequently, many other international performances were held by Cook in cities that include: Baden, Berlin, Budapest, Leipzig, Madrid, Mexico City, Minsk, Montreal, Munich, Quebec City, Rostock, Seville, Stockholm and Vienna.