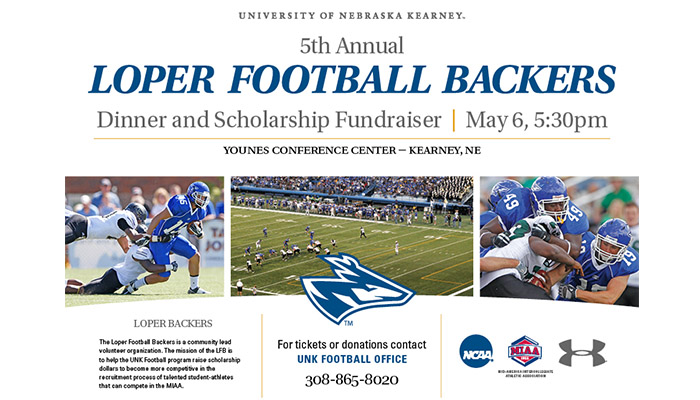 KEARNEY – The University of Nebraska at Kearney has gathered a lot of momentum with its football fundraising efforts over the past four years.

Thanks to the Loper Football Backers Club dinner and scholarship fundraiser established in 2010, the program has raised $466,000 for scholarships and other program needs.

UNK will look to continue that momentum when Loper Backers hosts this year’s fundraising event May 6 at the Younes Conference Center in Kearney. The evening starts with a 5:30 p.m. social hour, followed by dinner and silent auction at 7 p.m. and live auction at 7:45 p.m.

Last year more than 600 people attended, with a record $135,000 raised for the football program.

“Our third season in the MIAA is just five short months away, but the building blocks of our competitiveness began in 2010. Without this much-needed financial support, we would not be in a position to attract the caliber of football player we need,” said UNK Athletics Director Paul Plinske. “We encourage all Loper fans to come out on May 6 to help show their support as we prepare for the 2014 season and beyond.”

UNK Head Coach Darrell Morris said the dinner and auction “has become a vital part of our drive into competitiveness in the powerful MIAA.

“It has enhanced our ability over the past few recruiting classes to attract the type of student-athlete that can compete both in the classroom at UNK and on the field in the MIAA,” he added.

The focal point of the event, the silent and live auctions, includes more than 100 items. Among items that will be auctioned:

Those not able to attend the banquet but who would like to bid on auction items can do so by visiting online auction company Qtego at www.qtegoauction.com. By registering your phone, you can bid on any item.