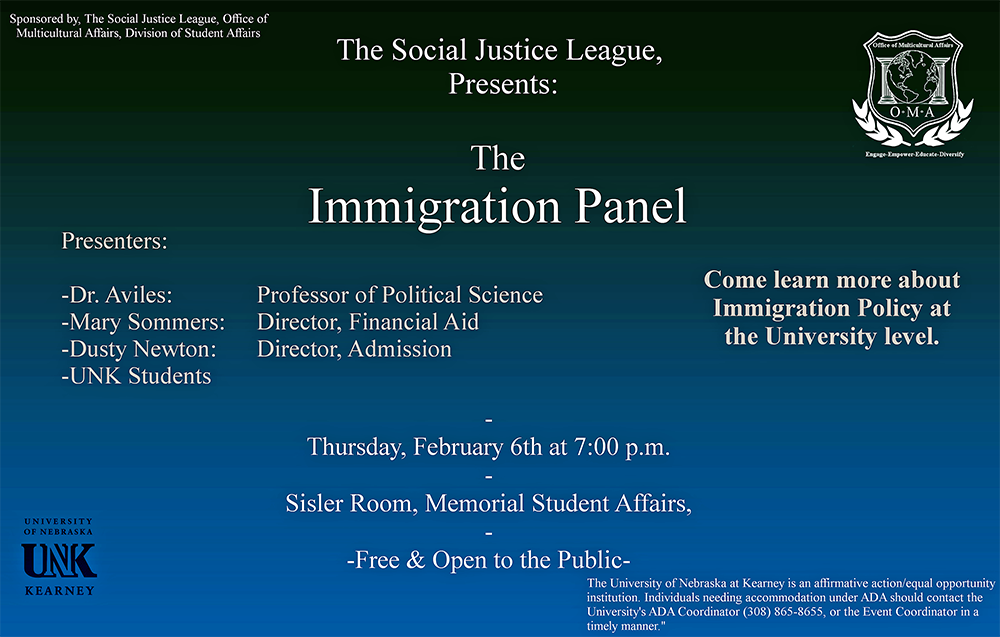 KEARNEY – The University of Nebraska at Kearney’s Social Justice League will host an Immigration Panel to explore immigration policy at the university level.

“It’s a topic that we chose because immigration reform has been a hot topic, and we wanted to make it relevant to students,” said Stephany Tejada Castillo, a sophomore business administration major and president of the Social Justice League.

The event, which is free and open to the public, begins at 7 p.m. Thursday (Feb. 6) in the Sisler Room in the Memorial Student Affairs building.

Some students on the panel are DREAMers, said Tejada Castillo of Grand Island, or students who meet the requirements of the Development, Relief and Education for Alien Minors (DREAM) Act.

Each panelist will give a short presentation. They will then take questions from the audience.

The UNK Social Justice League was founded in 2012 and aims to raise awareness about social issues.

Through “Sing to Save Your Lungs,” the Social Justice League worked to raise awareness about smoking. The “I Stand for Freedom Campaign” aimed to educate the campus about human trafficking.

The organization won the 2013 New Student Organization of the Year Award from the Office of Student Life.

The Social Justice League meets at 5 p.m. Mondays in the Office of Multicultural Affairs.

The Immigration Panel is sponsored by the Social Justice League and Office of Multicultural Affairs, Division of Student Affairs.