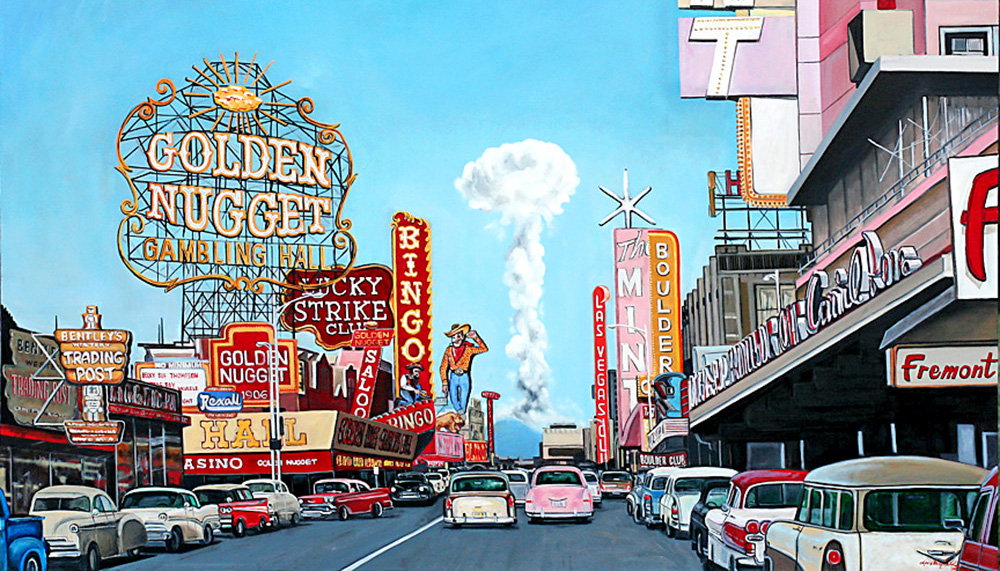 “Doomtown” explores the paranoia of the atomic 1950s and 60s in America.

“The exhibit is a great fit for the Los Alamos Historical Museum because it shares a significant piece of our history,” said Heather McClenahan, executive director of the Los Alamos Historical Society. “Many people from Los Alamos were involved in the testing program depicted in the paintings and have stories to share about those experiences. It also shows a unique time and place in history and brings those stories to younger audiences who may not have experienced the fear of growing up in the age of Mutually Assured Destruction.”

“Doomtown” features a series of oil and acrylic paintings, and depicts the phenomenon of atomic culture and the intense psychological symbol of the mushroom cloud.

“As a teacher, it occurred to me that the whole idea of atomic testing and the subsequent paranoia of the 1950s and 60s McCarthy era communist investigations was something foreign to many of today’s young folks,” Waterfield said. “Further research enlightened me to a whole movement in American culture to offset the fear of the ‘duck and cover’ way of life by ‘domesticating’ the bomb.”

The exhibit was inspired by the artist’s childhood fascination with monsters. The creatures from monster movies of the 1950s were often the result of man’s carelessness with atomic energy and the testing of atomic bombs, Waterfield said.

“I was especially intrigued by the construction of the survival towns – nicknamed ‘Doomtowns’ – that were constructed by the Civil Defense engineers. These were actual towns constructed in the Nevada desert, furnished and complete with vehicles.”

The towns were used to test atomic bombs, and people became increasingly fascinated by the explosions.

“It made monsters, it made people grow to 50 feet tall, or turned them invisible, or made insects grow to the size of a house,” Waterfield said. “It was so outrageous and entertaining, the threatening reality of world annihilation was greatly diminished.

“We had atomic beauty contests, and drank atomic cocktails from the roofs of Las Vegas casinos while watching the fiery mushroom clouds rise in the distance like a harmless fireworks show. This is what ‘Doomtown’ is about – the bomb as compensatory pop culture.”