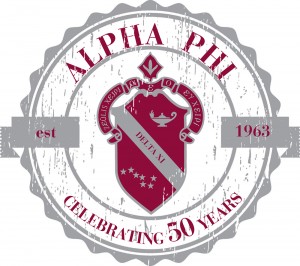 In early October, the 50th anniversary reunion of UNK’s Alpha Phi chapter included a reception at Kearney Country Club with music by UNK student Lanny Fuller and a welcome by Dean of Student Affairs Joe Oravecz. Activities also included campus tours, including a tour of the Alpha Phi house that was built in 1991, and tailgate party at the Alumni House followed by the Loper football game against Lindenwood University.

“Everybody found their sisters that they haven’t seen forever. There was tons of chatter, constant chatter. It was great,” Lungrin said.

“Today we celebrate the 50th anniversary of Alpha Phi’s beloved Delta Xi chapter,” Boland said during her speech. “We celebrate your commitment to sisterhood, scholarship and service. We celebrate the collegians and alumnae alike who hail from UNK and represent their university and fraternity with honor and pride. We celebrate your belief in lifelong, never-ending friendship. You are a true source of inspiration for Alpha Phi.”

Twelve charter members attended the celebration and were given charter pins. “That was really special because they were the first members of our chapter back in 1963,” Lungrin said. “We wanted them to feel really honored.”

Founding advisors Barbara Bush and Jane Smith, both of Kearney, were also given charter pins.

“Your college experience, if you do it well, is such an important time for growth in your life,” Lungrin said. “People were saying, ‘These women supported me, they helped me grow, they’ve been the bridesmaids in my wedding, they’ve been there for the good times and the bad.’ They wanted to come back and participate in that original sisterhood.”

The importance of the event, Lungrin added, was reconnecting people to the organization and the university.

“They didn’t just come back for their connection to Alpha Phi, they came back because of their connection to Kearney. So many of them have not been here for years. When they were walking around the campus they couldn’t believe how much is the same, and how much has changed. It was really neat to see.”

One thought on “UNK Alpha Phi celebrates 50 years on campus”