KEARNEY – Bob Sahling wasn’t able to go to college in the 1940s but is doing what he can today to help generations of young Nebraskans have access to an education at the University of Nebraska at Kearney.

The longtime Kearney businessmen made a $1.2 million gift to the University of Nebraska Foundation to create a permanently endowed fund to provide full-tuition scholarships each year. 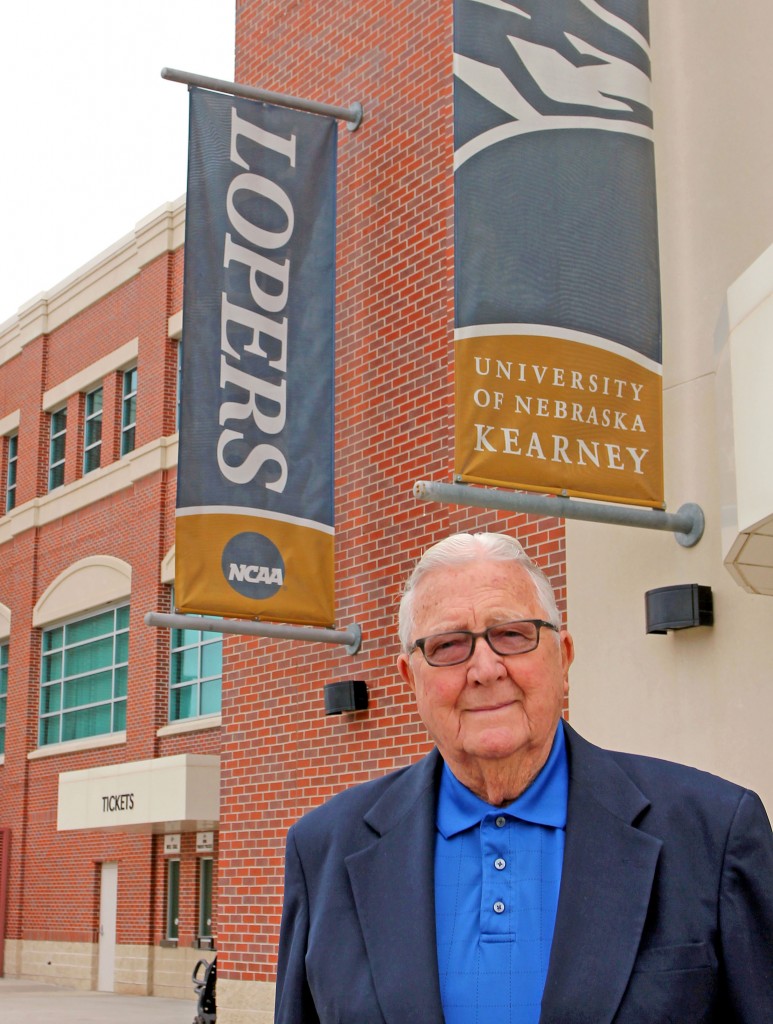 “Bob Sahling has been a loyal and enthusiastic supporter of UNK for many years,” UNK Chancellor Doug Kristensen said. “This generous gift benefits the entire campus as a model for how to improve the lives of young people. This gift will touch the lives of many people forever. I’m proud to have the chance to work with Bob Sahling.”

“We are grateful to him for passing on his legacy to our student-athletes,” he said. “He wants to see us successfully transition to the MIAA, and we hope this scholarship gift will encourage others to help us build our success in football.”

The Sahling scholarships will be awarded by the UNK financial aid office and athletics department. Award recipients must maintain academic requirements to remain eligible.

“Bob has been a wonderful friend to our football program for many years,” said UNK head football coach Darrell Morris. “Our players enjoy spending time with him, and I know he enjoys them as well. His numerous gifts, which we have used for many scholarship awards, have been instrumental in helping us start the process of becoming a competitive team in the powerful MIAA.”

This is not the first time Sahling has demonstrated his support for UNK students. Longtime university benefactors, Sahling and his late wife, Dode, enjoyed supporting students over the years, providing scholarships for student-athletes and non-athletes on campus. Sahling has also established a planned gift at the University of Nebraska Foundation to provide additional support for students through his estate.

“I experience real joy in getting to know the students and seeing their many accomplishments,” Sahling said. “What has also motivated me to give is witnessing the dedication of university leadership to the important mission of UNK, including Chancellor Doug Kristensen, Coach Darrell Morris, former Athletics Director Jon McBride, University of Nebraska Foundation’s Pete Kotsiopulos and others.”

Sahling grew up in the Dust Bowl days on a farm near Kenesaw and is a childhood survivor of scarlet fever, which took his sister’s life when she was 8. His mother worked tirelessly to care for her family, making their own clothes and maintaining their home, while his father operated trucks to support his family.

Bob and Dode married in 1955 in Kearney and raised four children: John, Sherry, Ron and Holly. Bob operated trucks and sold used ones before starting his own Kenworth franchise in 1972, which grew to include operations in Kearney, York and Columbus. The company is now owned and operated by his son, John.

“Dode and I experienced some wonderful times through the years until her unfortunate passing in 1997. She would be delighted to know we have continued to support outstanding education in Kearney,” said Sahling

In 2007 Bob and Dode Sahling were awarded the Ron and Carol Cope Cornerstone of Excellence Award, the highest campus honor at UNK.