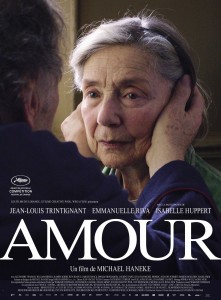 KEARNEY – Award-winning film “Amour,” which won a 2013 Oscar, is among films being shown at the University of Nebraska at Kearney’s Foreign Film Festival.

Hosted by the Department of Modern Language, 12 films will be shown at 4 and 7 p.m. on Oct. 14-17 in various rooms in Thomas Hall. All showings are free and open to the public. The Foreign Film Festival includes Spanish, French, German and Japanese films, with two films shown in each time slot.

Written and directed by Michael Haneke, “Amour” won an Oscar in 2013 for Best Foreign Language Film and has won 47 international awards. The film depicts the struggle of Georges and Anne, an elderly French-speaking couple, after Anne has a life-altering stroke. It follows their ups and downs with her condition and the sacrifices they must make regarding their future. “Amour” will be shown at 4 p.m. in Thomas Hall room 119 on Oct. 14.

“Jiro Dreams of Sushi” will be shown at 4 p.m. Oct. 16 in Thomas Hall room 115. This popular film follows a Tokyo chef and his son through the complications and ambitions that each of them have regarding their restaurant. Jiro’s son has reservations about taking over the restaurant, and Jiro is on a quest to make perfect sushi.

The complete list of films, including the time, location and language.