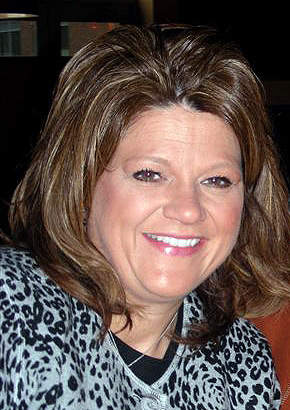 of governing body relations for NIKE North America, is the 2013-14 Ron Landstrom Executive-in-Residence at UNK. Her presentation is free and open to the public.

Scott, a Kearney State College graduate and Ansley native, previously worked for NIKE Sports Entertainment in Beaverton, Ore., where she was responsible for management of world-wide events in a variety of sports.

Before joining NIKE, Scott worked with USA Basketball, including four years as director of basketball operations. She was a member of the project team that coordinated the 1995-96 Women’s National Team and the 1992, 1994 and 1996 Dream Team training camps, exhibition games and international competitions.

Scott has also been involved with the U.S. Olympic Festival, the Goodwill Games and events such as the World Championship of Basketball, Olympic Games, World Soccer Tour, Tiger Woods Japanese Invitational and Melbourne/Sydney Track Tour.

At Kearney State, she was on the volleyball and basketball teams.

About Executive-in-Residence Program
According to Marsha Yeagley, UNK marketing and management information systems senior lecturer, the Ron Landstrom Executive-in-Residence program brings successful business executives to campus to talk with College of Business and Technology students about “best business practices,” as well as their personal career paths and lessons learned. These executives engage students in several classes, make campus presentations on their area of expertise and participate in a session with the CBT Student Advisory Board and faculty. They also participate in a networking opportunity with members of the Business Advisory Board.