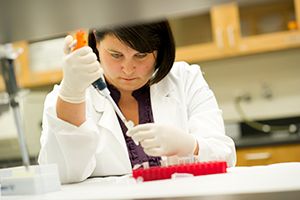 Glance quickly at Dawn Simon’s computer screen, and it may seem as if she’s scanning through a typical spreadsheet.

Look more closely, and you’ll see that the color-coded columns hold rows of letters – A, C, T and G. Some are in large groups, while others may be a single row with large chunks of space in between. As she scrolls through page-after-page, her eyes scanning row-after-row, it becomes clear what this really is – a secret code.

An assistant professor in the Department of Biology since 2009, Simon’s work revolves around genetic sequences. Small bits of DNA that have been turned into a data file, they contain thousands of lines. To even many scientists, it looks like nothing more than this: GGCCGAUAAUCAAGGCUAAUUAUCGGUU

For Simon, however, those letters arrange themselves into patterns. A’s pair with U’s, and G’s with C’s (and sometimes U’s). They “fold” into branches, some short and some long, with loops of non-mating letters in the middle. For example the “GGCCGAUAAU” in the above sequence folds on itself to pair with the “AUUAUCGGAA,” with “CAAGGCUA” remaining unpaired. She’s looking for introns, a specific type of sequence. What Simon sees on the screen isn’t chaos, but the orderly blue­print of an organic life form. 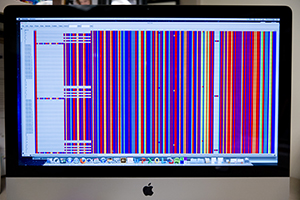 Simon’s field, molecular evolution, has exploded since the 1990s, when technology advanced enough to make genome sequencing efficient and relatively cheap. When she was an undergraduate at the University of Iowa, Simon said, the gradu­ate students who worked in the laboratory would sequence a handful of genes per year. Now, there are thousands of sequences available to scientists.

Sequence analysis remains a highly specialized field, how­ever, and even fewer scientists share Simon’s focus on a particular type of sequence, called an intron. From that group, perhaps only a handful of scientists share her specialty—Group I and Group II intron evolution.

Her intense focus has led Simon to publish 10 articles on intron-related research, including the results of a 2009 broad-scale study of Group II introns in bacteria that is the most compre­hensive treatment of the subject to date. Since coming to UNK, Simon has participated in projects funded by almost $1.5 mil­lion in grants and has collaborated with specialists in many other subfields of biology. As colleague Kim Carlson explained, Simon’s expertise and passion for bioinformatics put her in high demand.

“She brings a very unique part of biology that (UNK) hadn’t had, and many other places have started to have, and we needed to have,” said Carlson, who was also on the search committee for Simon’s position.

Carlson explained bioinformatics as “the marriage of computer science and biology,” which happens after a biological sample is collected, and DNA is extracted. With the help of computer programs, the material is then broken down into sequences of letters that represent its components. By studying those sequences, scien­tists can identify genetic characteris­tics. They can also form ideas about how those characteristics developed, and how they may continue to evolve.

“(Simon) can come up with a story (about the evolution of a DNA sequence) and put numbers to it,” Carlson said. That’s an element that improves any research project and makes the results more readily accepted.

“We all collaborate with her, because she has that unique background,” Carlson said, noting that adding Simon to the fac­ulty broadened research possibilities for the entire department. “It’s just opened up our entire research perspective,” she said.

Simon’s many collaborations range from a study of antibi­otic-resistant Staphylococcus on Portland’s public transportation system to chytrid fungus in bullfrogs on the Platte River. Carlson said she recently worked with Simon after she and colleagues in Sweden discovered a new virus, which occurs only in their two countries. Carlson asked Simon to do a phylogenetic analysis, which showed how the virus was different in each place. Ulti­mately, she said, that will help them figure out how the virus evolved–and perhaps how to combat it.

Another $100,000 grant supports Simon’s collaboration with the University of Nebraska at Omaha and Nebraska Wesley­an University on a project that will build more sequence analysis training into biology curricula. Titled “Integrating Bioinformat­ics Into the Life Sciences,” the project has researchers at each institution creating laboratory units for all curriculum levels. Simon said she and Letitia Reichart, a UNK assistant professor of biology, have developed one lab thus far, and will eventually have 20. The idea, she said, is to introduce more students to more research training, earlier.

“For me, my favorite thing to do is research, and I think you don’t know if you like research until you try it,” she said.

It’s the hunt for answers within a mass of data that first at­tracted Simon to molecular evolution and to science in general. Growing up in Cascade, Iowa, she said she first became serious about studying science after she tackled genetics problems in a sophomore biology class.

As an undergraduate at the University of Iowa, Simon found a question that has kept her searching for answers. “Ever since someone told me what (introns) were, I started thinking, ‘Why, why do they exist?’”

Introns are nucleotide sequences – small bits of an organism’s genome. These particular sequences are bits that get removed as an organism’s DNA is translated into useable products, such as proteins. While researchers know that introns exist, Simon said it is not always clear what role they play in a gene’s evolution. It has been estimated that as many as one-third of all human genetic disease are caused by introns that are not processed correctly.

Simon said most researchers choose to work with spliceoso­mal introns, because they are found in humans. She decided to work with Group I and Group II introns instead, which predate spiliceosomal introns and may be billions of years old. In fact, they (or similar genetic elements) are hypothesized to have existed before any DNA-based life form.

Simon did her first studies on Group I introns while at Iowa, and then chose to do her postdoctoral work in Canada in a labo­ratory that worked with Group II introns. Her work there led to the 2009 publication in Molecular Biology and Evolution. Simon considers it her most important paper, in part, because it highlights just how chal­lenging her field is.

For that study, Simon and two col­leagues analyzed all known Group II in­trons in bacteria. Based on those sequences, they created phylogenetic trees to try to understand how the introns change over time. While the study yielded some inter­esting data about intron evolution, Simon and her colleagues also found it was dif­ficult to create trees that were “robust” to changes in methods and sampling. She said that it is likely due to the antiquity of the introns, which results in a large number of differences between sequences and makes it difficult to reconstruct their evolutionary history.

With phylogenetics computer programs now available, Simon said anyone can make a tree simply by inputting a genetic sequence. Her study highlighted how unreliable such an approach would be without comparison testing.

The study determined that by focusing on more closely related introns, researchers might have less difficulty creating trees they could trust. Simon has taken that lesson to heart in her research at UNK, which has included a more focused study of Group II introns in red algae.

Supported by a five-year, $1.3 million collaborative grant from the National Institutes of Health Institutional Development Award Program (IDeA) Networks of Biomedical Research Excellence (IN­BRE), Simon has been working on a study of the oldest known Group II intron and the first reported in red algae. She and undergraduate stu­dents who are part of the Nebraska- INBRE program studied the introns to understand how they have degen­erated over time.

While Simon said results from that research should be ready for publication soon, another project is just getting started. Collaborating with scientists at Duke University, Simon has found introns in lichen fungi, an exciting finding for those studying intron evolution, she said.

“I think this is the project we’re going to be working on for a long time,” Simon said. Working now from a $20,000 award, she’s preparing pilot data to qualify for a larger grant.

Currently, Simon is sifting through thousands of intron se­quences from Duke researchers, who found them while conduct­ing studies on the evolutionary relationships of fungi. They had no use for the introns, but were intrigued by the fact that the fungi had both Group I and spliceosomal introns; it is not typical to see them together. This led Simon to believe that in the lichen, she might have a perfect setting to test her hypothesis that spliceoso­mal introns can evolve from the much older Group I introns.

As she analyzes the sequences, Simon looks for transitional forms – introns that have characteristics of both the spliceoso­mal and Group I types. Simon said she believes she has already found some of those forms in the sequences, but she is still looking for a molecular fossil that will show how one type could have evolved from the other.

Although such findings will not be the magic key that unlocks all the secrets of genetic code, they will reveal important clues. And while Simon may not have yet answered the bigger question of why introns exist, everything she sees within those A’s, C’s, G’s and T’s cracks open the door of understanding just a little bit further.