A study released today by the University of Nebraska at Kearney and Economic Modeling Specialists, Int. (EMSI) shows that the Kearney campus adds $653.8 million annually to Nebraska’s economy.

To arrive at that number, the study took into account $590.4 million of student productivity, plus the combined effects of spending in Nebraska each year by the university itself ($42.7 million), and by students and visitors from outside the state ($20.7 million).

“The largest and most important economic impact of UNK is, by far,” according to the study, “the student productivity effect that stems from the annual average income differential between the 30,000 UNK graduates who live in the state and those in the Nebraska workforce whose educational attainment is only at the high school level.” 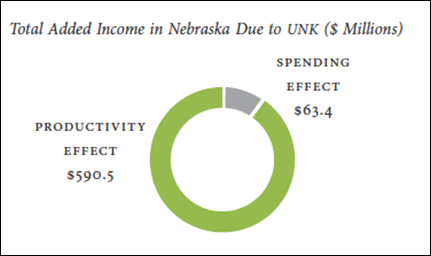 “I believe Nebraskans recognize that UNK is a regional leader for education, culture, community service, and health care,” said UNK Chancellor Doug Kristensen. “This study demonstrates that we are a major economic engine, and offer a tremendous return on investment to students and taxpayers.”

UNK chose EMSI to conduct the study because of their unique methodology that, while taking into account actual spending by the institution, also recognizes the even more powerful impact of the university’s graduates in the Nebraska workplace.

“Rather than trying to make the university artificially look good by claiming every possible dollar, we calculate the main components and then discount them,” said EMSI research economist Tim Nadreau, the study’s lead author.

“For example,” he said, “any money the university receives from within the state is not included in their impacts since that money and the associated multiplier effects are not new monies in the state.”

Though EMSI’s approach to economic modeling is rather conservative by some standards, the study’s researchers determined that UNK-related activities and outcomes are equal to nearly 1 percent of Nebraska’s gross state product, a significant percentage given UNK’s location and size.

Personal incomes in Nebraska “would be substantially lower without the educational activities of UNK,” the report clarifies.

An important part of the study addresses educational value and return on investment, or as the research report states, all students and taxpayers “want to know if they are getting their money’s worth.”

Students realize a 16.5 percent rate of return on their educational investment at UNK, and recover all costs, including tuition, fees and forgone wages, in 9.3 years. “9.3 years is a long time, but students aren’t venture capitalists, they’re making a long-term investment,” Nadreau said.

According to the study, taxpayers also benefit from higher earnings of UNK students, which expand the tax base in Nebraska by about $48.6 million each year. Taxpayers also save $11.2 million per year from benefits associated with UNK graduates, including improved health, reduced crime, and reduced welfare and unemployment. 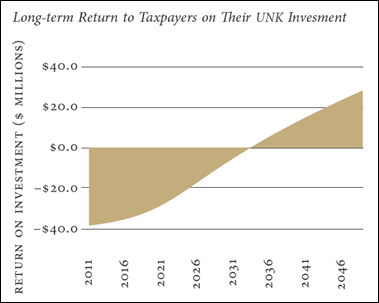 From the taxpayer’s perspective, state and local governments see a rate of return of 6.0 percent on their support for UNK, comparing favorably with private sector rates of return on similar long-term investments.

The study was designed to address UNK’s impact on the Nebraska economy as a whole, not necessarily its impact in the Kearney area—which would be another study.

“It is already well known that UNK is a significant pillar in our community,” said Darren Robinson, president of the Economic Development Council of Buffalo County. “This report solidifies the importance of UNK’s presence by reflecting $56.9 million in annual payroll, the significant ancillary spending in the community and the state, as well as the diverse talent drawn to Kearney by way of students and faculty. Buffalo County is the fourth least stressed county in the country thanks to our diversity of industries. Buffalo County is also the fastest growing county outside of the Lincoln\Omaha Metro reach. UNK is that tipping point.”

The study was commissioned by UNK in early 2012 to help the university better understand its economic and social impact in the region, using university data, public databases, and national studies and surveys from 2010-11.

EMSI is a leading provider of socioeconomic impact and strategic planning tools to colleges and universities in the U.S. and Canada.

UNK is a “Top Ten Public University in the Midwest,” according to the U.S. News and World Report annual “Best Colleges” edition.

(The study is available in its entirety at http://www.unk.edu/impact)