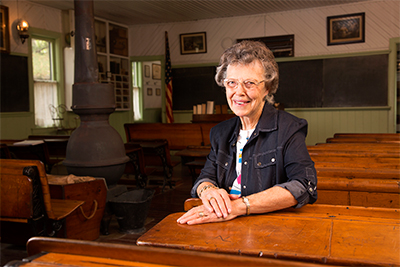 Mary Lou Kristensen taught in rural Nebraska schools and saved her money to earn a teaching degree from Nebraska Teachers College, now the University of Nebraska at Kearney. She’s 82-years-old now and among a dwindling number of rural teachers who remember the days when one-room schools dotted the Nebraska countryside, when rural teachers overcame many hardships to educate generations of Nebraskans.

UNK wants people for generations to come to remember these teachers and has created a new scholarship program in their honor called One Room, One Teacher. Donations to the University of Nebraska Foundation in support of the program will fund scholarships for future teachers.

Contributors will then have their name or the name of a person they are honoring permanently displayed on the One Room, One Teacher wall of honor at UNK. Many of those who will be honored are graduates of UNK, but the university also wants to honor non-alumni. Anyone who taught in a rural school in Nebraska is eligible for the honor, and individual schools may also be recognized.

Mary Lou enjoys telling her children about her experience teaching in a country school. One of her sons grew up to become an educator himself: Doug Kristensen, the chancellor of UNK.

About the university’s efforts to recognize rural teachers and schools Chancellor Kristensen said, “We’ll be able to remember the heritage of where education began in this state and what really made it strong, and I think there’s a number of people who will feel really good and have a passion about one of the strongest Nebraska traditions, that of the country school.”

Those one-room schools played a big role in the history of UNK, which opened its doors in 1905. It was called the Nebraska State Normal School back then, and its mission was to prepare teachers for rural Nebraska. In the century since, UNK has educated and prepared more than 20,000 teachers, said Ed Scantling, dean of the College of Education.

“The One Room, One Teacher program is an opportunity to pay tribute to those wonderful teachers from all across the state of Nebraska in rural community schools,” Scantling said.

Mary Lou Kristensen, who also attended a one-room school as a student before teaching in them, plans to give to the One Room, One Teacher effort.

“I think it’s terrific,” she says. “I just think those schools played a vital part in the history of our state.”

She has researched the one-room schools of Kearney County and says this county alone used to have 69 one-room schools, spread evenly across the land, so most students didn’t have to walk or ride their horse more than three miles to reach one. Few of those buildings remain, she says, except for the ones people have turned into as garages, sheds or quaint country homes.

Read more of Mary Lou’s memories of being a one-room school teacher in a feature article available for publication at campaignfornebraska.org.

Another goal of UNK’s One Room, One Teacher effort is to help preserve the stories and history of rural education.

UNK alumna Doris Murray of Axtell, Neb., who turned 90 this year, was pleased to learn her alma mater was interested in learning from her what it was like years ago to teach in a country school.

“If something popped up that wasn’t quite satisfactory you had to learn how to deal with it and go right on, because you were the only one in the building,” said Murray about the type of person it took to teach in rural Nebraska.

She taught in one-room schools for 17 years in Phelps and Buffalo counties and didn’t stop teaching until retiring in 1987.

When asked what made teaching in a rural school special to her, she said, “Well, I was in charge. I was the nurse, I was the janitor. I was the teacher of course. The children they were all so good and so willing to learn.”

“And I loved recess.”

The university provides a website at unk.edu/academics/coe/oneroom for those who wish to learn more about the One Room, One Teacher Scholarship program and how to participate. The site includes a video about the program. Those interested in participating or learning more may also contact Tracy Lungrin at the University of Nebraska Foundation at 800-432-3216 or 308-698-5278.

The University of Nebraska Foundation is an independent, nonprofit organization that has connected the dreams and passions of donors to the mission of the university for more than 75 years. In 2011, donors gave a record $172 million in gifts for scholarships, academic programs, medical research and other priorities at the university. The foundation’s current fundraising initiative, the Campaign for Nebraska: Unlimited Possibilities, concludes in 2014. For more information, visit campaignfornebraska.org.