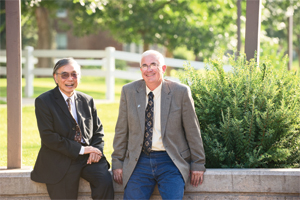 Teara Archwamety and Max McFarland are right where they have been for the last 25 years – side-by-side in the College of Education.

McFarland is a tall man, with white hair and a tan from working in his vineyard. Archwamety, a native of Thailand, is shorter with salt-and-pepper hair and a quiet demeanor. McFarland leans back in his office chair, cradles the back of his head in both hands before he speaks; Archwamety leans forward a little, his hands clasping a binder filled with the facts he might need to answer questions accurately.

“We tell people we’re twin brothers,” McFarland laughs. “He’s from one side of Ireland, and I’m from the other.”

Archwamety explains their partnership differently, but laughs as well when he reaches out to tap McFarland on the shoulder. “Max is a conceptual wizard.”

“And (Archwamety) is the methodologist, the data analysis person,” McFarland finishes.

McFarland, former chair of the Department of Counseling and School Psychology, has been at UNK since 1986, when it was still a state college. Archwamety joined the department in 1977.  Mutual respect and complementary strengths between the two men have formed a strong partnership that has led them into research and teaching with an international scope.

“We work together so well,” McFarland said. “I think in terms of developing the whole research approach we use in our department . . . (our partnership) is the reason we can do that.”

Among their biggest accomplishments is the creation of the International Collaborative Research Initiative (ICR), an agreement with two other schools that has given rise to an academic research journal that spans two continents, a biannual symposium, impressive student and faculty research, and a more global focus for UNK graduate students.

“To have a better understanding of what our role is, what our place in the world is, we have to have a bigger perspective,” McFarland said, explaining how a more globalized viewpoint can make UNK graduates more effective school psychologists.

In fact, the overall field of school psychology is moving in a global direction. Developed in the United States in the late 1960s, school psychology programs are now in dozens of countries around the world. The International School Psychology Association (ISPA) recently developed accreditation standards; in May, the UNK graduate program became the first in the world to receive that accreditation.

McFarland and Archwamety have seen the importance of globalization to their discipline firsthand. Archwamety, who has taught in Thailand and Japan, as well as the United States, received the Outstanding Scholarship/Research Award in 2009 from the UNK College of Education. In 2007, he received the prestigious Pratt-Heins Award for Scholarship and Research.

That same year he also received awards for being an outstanding Faculty Mentor and Graduate Studies Faculty Mentor. Specializing in reading education, he has presented his research at more than 30 national and international conferences, including presentations in Thailand, Spain and South Korea. His more than 50 national and international publications include a 2008 article titled “Improving Legibility in Language Without Space Between Words.”

In that research, he looked at the effectiveness of different ways to make spaceless texts more readable. His findings could have implications not only for computer programmers who use languages that run words together, but for those teaching people to read languages (such as Thai, Greek and Hebrew) that do not put a space between words.

McFarland, who specializes in infant mental health, was one of only seven professionals on the advisory board to re-standardize the Bayley Scales of Infant Development. He was one of only four U.S. advisory board members for the re-standardization of the Wechsler Preschool and Primary Scale of Intelligence. He has received campus and university-wide awards for service and teaching; the Nebraska School Psychologists Association honored him with the Founders Award in 2001, Outstanding School Psychologist award in 1990 and the Service Award from 1987-1990.  His “collaborative team assessment” model of evaluating young children, which he developed with Theresa McFarland, his wife, was outlined in a 2001 article in the journal Zero to Three.

While presenting that model at a conference several years ago, McFarland said he realized how different views on school psychology can be. Teams from all over the Pacific Rim attended; while some countries were familiar with the latest psychological theories and the respective terminologies, others had sent school representatives who were not professional psychologists, nor were they professional educators. He and his wife had to quickly adapt their presentation, not only so the words could be interpreted correctly but so that everyone would understand the concepts.

The ICR began in 2005 and emerged from a memorandum of understanding between UNK and the Vytautas Magnus (VM) University in Lithuania. James Fleming, McFarland’s predecessor, had initially formed a relationship with Antanas Gostautus from VM, and both schools wanted further collaboration. Coming in as chair, McFarland said he decided, “We’re either going to kill this ugly animal, or we’re going to put it on the radar somewhere.” The UNK graduate dean awarded a research assistantship to support the Initiative. Recently, the Initiative was expanded to also include Dr. Fleming’s new school, Black Hills State
University in South Dakota.

Since then, UNK faculty and students have traveled to Lithuania three times to teach and study.The mission of the initiative  has always been to encourage international research, and both professors said it has. Students and faculty have published 33 articles and abstracts in refereed publications, and presented at three international and five national conferences.

Publications include an article Archwamety and McFarland co-authored with a former UNK Thai graduate student Kamonwan Tangdhanakanond. The study looked at differing attitudes toward school psychologists among Thai and American college students; the findings were published in 2009 in School Psychology International.

Other scholars include Shannon Helgoth, who did a meta-analysis of 43 countries that have school psychology programs, and Kyndra Bendickson, who collected data on infant mental health while in Lithuania. Bendickson compared the data to results from American infants, and her findings will be published in the next issue of the journal published by ICR members. Jessica Gosda, in her scholarly study for her specialist degree, compared the accreditation standards of the ISPA and the National Association of School Psychology.

These projects were among the many Archwamety and McFarland have co-mentored, earning them the UNK Graduate Studies and Research Mentor Award in 2011. It was the first time the university gave a dual award.

The duo has organized the Kearney portion of eight online research symposia, during which students and faculty from five different universities have presented their original research. The universities that have participated include UNK, VM, Black Hill State University, Chulalongkorn University (Thailand), and Pusan National University (South Korea). In 2008, UNK and VM further expanded the initiative by creating the International Journal of Psychology: A Biopsychosocial Approach.

McFarland is one of two editors-in-chief, along with his counterpart at VM, and Archwamety is one of two associate editors. While both the print and online versions are published in Lithuania, the UNK editors find reviewers for and decide on all the English language submissions.

Archwamety said they want the journal to offer a broad look at psychology. “So many journals have such a narrow focus,” he said. “The idea is to keep it broad, so we can pull in from different countries, as many different psychologies as possible.”

With seven issues published and an eighth at the press, the journal has been well-received. It was accepted into the PsychInfo database only two years after its launch, a feat Archwamety described as “unusual.” McFarland added that if PsychInfo is not the premier database for psychological research, “It’s up there someplace,” and the inclusion of the journal is a strong sign of acceptance.

Each issue has abstracts from the student and faculty presentations accepted into the ICR’s biannual online research symposia. At UNK, the event happens in two telecommunications rooms in the College of Education and one room in a neighboring building. Audiences hear presenters who are at their home universities and see PowerPoint slides. A handout is also made of all the slides to help audiences follow the information that has been translated into English.

While most presenters are from the three ICR schools, Archwamety explained personal and professional connections have brought in presentations from other sites. Tangdhanakanond first spent her time as a graduate student at UNK in 2005. She kept in touch with UNK faculty, and in recent years, was instrumental in arranging presenters from Thailand and South Korea. A student from Poland, who had studied at Black Hills State, presented her research after returning to Jagiellonian University in Krakow.

While he welcomes the greater participation, McFarland said having more countries involved makes the symposium’s tricky scheduling even trickier. Last spring, the event began at 7:30 a.m. in South Dakota, 8:30 a.m. in Kearney and 4:30 p.m. in Lithuania. Once, the presentations ended at midnight for one site. McFarland and the other organizers are considering how to deal with logistics as the symposia grow.

“As we look at the number of partners who want to get involved, (it seems that) our students could get the chance to interact with dozens of students around the world, but maybe in a half-dozen symposia around the world, rather than in one,” he said.

All 50 students in the school psychology graduate program, McFarland said, are touched by the ICR and that influence will continue to grow, with a new course called Globalization of School Psychology. Among the course requirements is that students become members of the ISPA and befriend a school psychology student from another country.

McFarland said his hope is that UNK graduates learn to work across social class and economic lines, cultural lines, languages, and all the other barriers that often keep people from understanding and helping each other.

“It is just so helpful to expand their horizons, because so many of our students haven’t had these experiences,” he said.

At least one important part of the ICR initiative was gone in the fall. Archwamety’s retirement is official in August. Although he will not have a role in the symposia or with student research, he will continue to edit the journal.

“He and I certainly fully intend to stay involved with the journal,” McFarland said, as well as doing their own collaborative research. “The partnership will live on.”