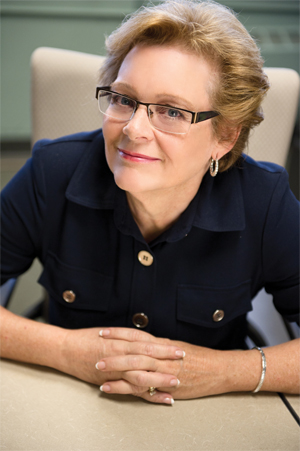 A spring Sunday night in 1998 spent in a hand-built, two-story brick farmhouse in far western Romania made a lasting impression on Sylvia Asay as a person and a researcher identifying traits of strong families.

Asay, professor and chair of the Department of Family Studies and Interior Design, had spent two weeks interviewing and observing the four-generation family for her doctoral dissertation about families in post-communist countries of Eastern Europe, specifically Romania.

“I watched their family dynamics. If they went to church, I went to church with them and to the store,” she said. On the last Sunday of her visit, Asay, her husband Ted and their three sons were invited to the poor family’s home for dinner. As Asay tells the story 13 years later, it’s clear by her expression that every detail remains crystal clear in her memory.

“They all stood around the table, and we ate. We didn’t realize until later that they couldn’t afford to eat,” she said. “What a lesson for three boys then in third grade, fifth grade and a sophomore in high school.”

She planned all along to pay the family for their time and hospitality, but the family didn’t know that when they invited the Asays for dinner.

Over the two weeks, she had often wondered how the Romanians could even get up in the morning, knowing how hopeless their lives were. “But they were some of the happiest people I’ve ever met. I learned more from them than I ever will from anywhere else,” Asay said.

“When I walked away, I thought, ‘How arrogant of me to think I would be doing the teaching.’” 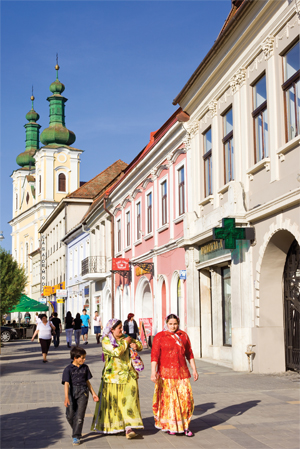 Asay’s childhood with her parents and two sisters on a Kearney County farm near Keene was idyllic in comparison. The 1974 Axtell High School graduate participated in speech, theater and vocal music; took every 4-H project offered; went to church every Sunday with her family; and watched her dad and uncle grow corn, soybeans and cattle.

She learned to drive at age 9 behind the wheel of a “round-top, stick-shift pickup” pulling a trailer onto which the men loaded irrigation pipe. Her first classroom was one she created at home to present lessons and give tests to her younger sisters. They were a typical Nebraska family. “We were tight-knit and close to extended family — grandparents, aunts and uncles. Everyone got together at holidays, and nobody moved away,” Asay said. Asay and her husband have incorporated those positive values into their 35-year-marriage and into the lives of their sons, now 29, 25 and 22.

Faith was a key component to family strength. No marriages ended in divorce. “I guess if we had dysfunction, we never talked about it,” she said.

“‘Family has a lot of different configurations today,” Asay said. “There’s a 50 percent divorce rate.” That means more single parent, shared-parent and blended families, and children sometimes raised by relatives other than parents.

“There isn’t really a typical family. There are strong families and families with challenges,” she added.

Family strengths have been her focus since she took her first class on marriage and family relations at Trinity International University near Chicago, where she started her college career as an English major before transferring to Kearney State College/UNK. Asay found her calling when a Trinity professor required students to do a “geneogram” study of their family trends, including factors such as education, professions and personalities. “You can begin to see why you are the way you are,” Asay said, and then avoid negative patterns and focus on positive ones. 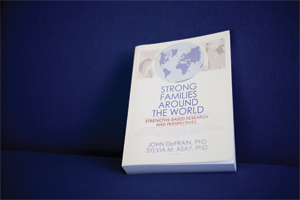 She earned her bachelor’s and master’s degrees at KSC/UNK, in home economics education and vocational education, respectively. Her first big step toward understanding family strengths on a global scale came in the mid-1990s when she laid the groundwork for her Romania research as a doctoral student at the University of Nebraska-Lincoln.

Today, she teaches classes on marriage and family relationships, cross-cultural family patterns, and families in crisis; speaks on and writes about family strengths; and extends her global research to domestic violence issues.

When she needed a dissertation topic, her initial studies of family dynamics in Eastern Europe “just sort of fell in my lap,” Asay said.

“I was so intrigued by the fall of the (Berlin) wall,” she said. Asay decided she had to learn more about the families behind it. Her husband had been on a church mission to teach English as a second language in Romania, so they decided to return and take their boys.

“That was one of the best decisions we ever made as parents – to let them see the world. They came back different kids,” Asay said. She did a pilot study in 1994, using focus groups of women in two major Romanian cities – Bucharest, the capital, as well as the cultural, financial and industrial center of the country, and Craiova, the sixth largest city and a political center. Women in the two cities were gathered for the focus groups with the help of American missionaries. Her goal was to better understand the culture in Romania.

Her research is “qualitative,” which involves talking to people and collecting information in words, versus quantitative, which is often done by survey and expresses information in numbers.

“I can’t do research without a story,” Asay said. “I want the in-depth, the descriptive things.” Many of her stories were gathered by observation in 1998 during two-week stays with each of three Romanian families – a farm family, a family in a mountain town in the Transylvanian Alps and a family in the Black Sea city of Constanta.

What Asay found were the poverty and the lingering effects from the old communist system. “Even in 1998, I could never record either audio or video because of the fear of who was listening,” she said, which was almost 10 years after the fall of the Berlin Wall. “They don’t question anything. Many didn’t think on their own, because they weren’t allowed to think on their own.” Asay said that in the communist education system, students learned only what their teachers told them. They rarely wrote essays, because government officials did not want anyone’s opinion.

She tells the story of an American missionary who had lived in the same building in Bucharest for years with no hot water. One day, he decided to see if he could fix the system. He went to the basement and found valves labeled “hot” and “cold” in Romanian. He turned the “hot” valve and instantly had hot water.

“No one ever went down to see why they didn’t have hot water,” Asay said. “They didn’t question it.”

She connected with her Romanian families through university sociology departments there that she had contacted
via the Internet, asking also for assistance with housing for her family and interpreters.

Asay also visited some of the notorious Romanian orphanages. She said some orphans had been subjected to AIDS experiments during the time that former head of state Nicolae Ceausescu was in power and that most of the orphans had emotional disabilities from the lack of human contact as babies. Groups such as World Vision had started to
take over management of the orphanages by 1998.

When asked why people left their children in such places, Asay replied, “Economics. They just could not afford a child, so they would just leave them there. They thought they were doing their children a favor.”

Worse yet, many children in neighboring Moldova were abandoned to the streets, she said.

Asay’s early research also included interviews and family surveys in former East Germany in 1999. The research was done with the help of faculty at the University of Rostock, where the UNK construction management program had a working relationship.

Asay and UNL Extension Professor of Family and Community Development John DeFrain have worked together on numerous publications about family strengths. The two co-edited the book Strong Families Around the World: Strength-Based Research, which includes chapters from a selection of internationally recognized family specialists, including Asay’s work on Romania. Asay and DeFrain have determined that there are six qualities that make families strong: appreciation and affection, commitment, positive communication, enjoyable time together, spiritual well-being, and the ability to manage stress and crisis effectively. They have found the six qualities in strong families around the world.

“I found the six qualities there,” she said of her international studies. “They looked a little different, but they were still there.”
For example, Asay said one reason Eastern European families are close-knit is because they could not trust anyone else while under
the communist system of government.

Today, with more freedoms and outside influences on children, that strength now is being tested. Asay said those are also issues for families around the world. She used the example of families once gathering in the living room to watch TV together. Today, families scatter to TVs in several rooms of the house to watch at the same time, but separately. Among her current research projects is a study of text messaging and its use within families.

Her research has been selected for presentation nationally and internationally, including at the University of Russia in Moscow, Shanghai (China) Academy of Social Sciences, Australian Family Strengths Conference, the World Public Forum (WPF) in Rhodes, Greece, and at the National Council on Family Relations in Vancouver, British Columbia.

Asay’s career has focused on positive family traits. However, her more recent research in Romania and Moldova, reflected in a paper published in the January 2011 edition of the Journal of Family Violence, looks at domestic violence.

“That’s everywhere. We noticed that in every single country we studied,” Asay said.

A new book edited by Asay, DeFrain and two others, expected to be published in 2012, will feature chapters by authors from 17 countries to give a global perspective on family violence issues.