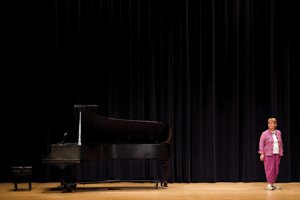 It was 3 o’clock in the morning last May when the lights came on in the second floor bedroom on Fourth Avenue. Composer Darleen Cowles Mitchell had been awakened from a sound sleep by a musical dream.

She quickly went across the hall to her study for a blank sheet of paper. Not music composition paper. Plain, ordinary paper.

She began jotting down the rhythms and melodic gestures she heard in her mind. Vertical lines to indicate the direction the notes should take. Elements of space and time, clear in her mind, were transferred to notations on the sheet. It is a process the UNK music professor has used to create the more than 100 published compositions she has written over the past 30 years.

“After all these years, how a musical piece is conceived is still somewhat of a mystery to me,” she said. “However, I do know that, at least for me, it is necessary to have an initial musical idea which generates some sketching. Then, I have to have an experience of the ‘whole,’ what Susan Langer calls the ‘commanding form.’ Sometimes, the time span between the initial idea and the commanding form can be months, or even years.

“In the case of this piece, the commanding form occurred to me in a dream. I clearly saw and heard the entire design of the work, although not in minute detail,” she said. Those details would be worked out over the weeks ahead. 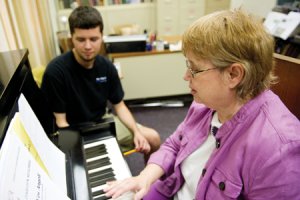 “Usually, the last piece of the puzzle for a new composition is in the form of a need—a commission, a performer asks for a piece or something like that.”

This time, what is usually the last piece of the puzzle was already in place. Franziska Nabb, a UNK flute instructor, had asked Mitchell to create a piece for the newly formed Trans-Nebraska Players—a five-member instrumental group comprised of music faculty from UNK, the University of Nebraska – Lincoln and Chadron State College. The instrumentation includes flute, cello, violin, viola and piano.

“She composed the piece on our request as there are very, very few compositions for flute, string trio and piano,” Nabb said. The ensemble performed the piece on six concerts in four communities across Nebraska and Iowa last spring.

Appropriately, the piece that came to Mitchell in the middle of the night is titled As the Moon in a Bright Sky, and as is true of much of her recent work, the piece reflects her spirituality. The work is “symbolically and metaphorically” based on one stanza of a Buddhist poem of the same name:

“As the moon in a bright sky

In some clear lake reflected,

Though to that lake the moon has never moved.”

“I like to work with text,” she said. “It gives you the ‘commanding form.’ Text can do that for you. When I get an idea, the music seems to flow. It was probably the only thing I did for two weeks. After I’m finished with the initial sketches, then I handwrite with pencil, so I can edit.”

For Mitchell, the work is seldom done at a piano. Instead, you’ll find her at the dining room table. “I do that, because I can spread the paper out. Sometimes, I will go to the piano to hear how a specific phrase flows, but not often.” 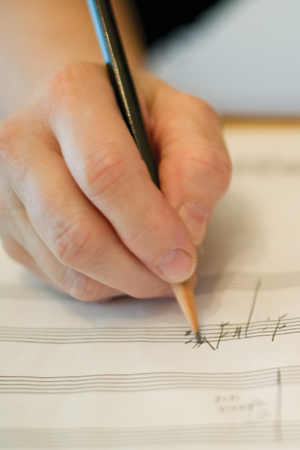 An award-winning composer of contemporary classical music, Mitchell has written 115 original compositions, 35 of them since coming to UNK in 2000. While she writes for orchestra, chorus, voice, and various instrumental soloists and ensembles, she is often creative in her use of instrumentation in her works, using unusual wind chimes, for example, or writing for the instrument to be played in a nontraditional way, such as playing a piano by opening the case and plucking the strings by hand, rather than using the keyboard.

When asked what composition was her favorite, or her most important, her response was quick. “That’s like asking a mother which one is her favorite child,” and then she added, with a light laugh, “There is always the tendency to prefer the most recent.”

After some thought, she named several, including, of course, her most recent–As the Moon in a Bright Sky. Also among her favorites is Images, originally written for flute and harp.

“It was my first piece to be selected in a blind jury for international performance (in Greece). It uses some indeterminate notation—no barlines and minimalistic repetitions—and I’m very happy with the sounds, melodic gestures and harmonies.”

The piece was premiered in Chicago by performers from American Women Composers-Midwest. She later rewrote it for violin and guitar, and Duo 46 performed the piece in Greece and on their tour of the U.S., including a performance at the Kennedy Center. The pair recorded Images for Guitar Plus Records. “And we invited them to UNK, and they gave a wonderful concert here,” Mitchell said.

Two of her favorite compositions—Journey to the Yellow Springs (1984) and Visions (1997)—were written for her husband Bob, who plays tuba. Visions is a concerto for tuba and concert band. The title and subtitles of the movements are based on the writings of Hildegard of Bingen (1089-1179), one of the early known female authors and composers. 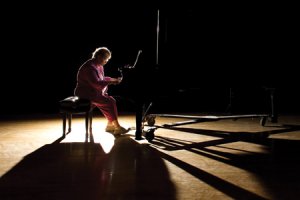 “I wrote this work (Visions) for Bob when he completed his master’s degree at Florida State University. The FSU Graduate Winds performed the piece, with Bob as the soloist, so I have a wonderful recording of it.

“The recording is so good,” she added, “that I have been able to use it to apply to various contests.” The work won Mitchell first prize in the American Pen Women National Composition Competition in 1998.

Mitchell has received numerous awards, grants and fellowships, including Illinois Arts Council Grants, Artist Fellowships, Meet the Composer grants and a Florida Arts Council Artist Fellowship. In 2005, she received the Nebraska Arts Council’s Distinguished Artist award; in 2006, the Composer’s Commission for the Nebraska Music Teachers Association; and in 2007, a commission from the Lincoln-based Third Chair Chamber Players for Music of Remembrance.

Mitchell, who teaches composition and organ, as well as coordinates the music theory curriculum as a professor in the UNK Department of Music, has served on the faculty of DePaul University, chaired the musicianship and composition department at the American Conservatory of Music in Chicago, and taught for the Chicago City Colleges European Division in Belgium, Moraine Valley Community College in Palos Hills, Ill., and Chattahoochee Valley Community College in Phenix City, Ala.

Mitchell holds a B.M. from De Paul University; the M.M. from Northwestern University, where she won the Faricy Award for Creative Composition; and a Ph.D. in music composition from the University of Chicago, where she studied with Ralph Shapey and Pulitzer Prize winning composer Shulamit Ran. Ran was only the second woman to receive the Pulitzer Prize in Music.

Among the early influences on her work was her doctoral work with Ralph Shapey, whom Mitchell said, “…was very structured. He helped give structure to my work,” and a group she founded while she was in Chicago, called the Marcel Duchamp Memorial Players. Music performed by the group has been described as free improvisation, experimental, contemporary and avant-garde. 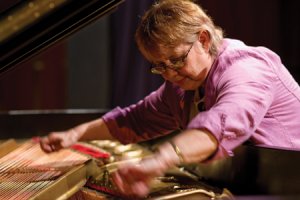 When she joined the UNK faculty, Mitchell’s passion for new music led her to establish the New Music Festival, and 300 entries were received the first year. The festival, which she describes as “a lot of work,” but also “exciting and rewarding,” has become an annual event that draws submissions by composers from across the nation. On occasion, international composers have also submitted work.

Submissions are reviewed by a five-member committee of UNK music department faculty, which Mitchell chairs. From among the submissions, works are selected to be performed in a series of three festival concerts. UNK musicians, along with area guest artists, perform the works featured in the festival.

While she hosts a New Music Festival for new and emerging composers, her own compositions are regularly selected for performance in prestigious, competitive festivals across the nation and around the world.

A piece written for flute, alto saxophone and piano, Jubilus, was performed at the World Saxophone Congress in Ljibljhana, Slovenia. In 2004, Watery Moon, a work for alto flute and vibraphone, was a jury-selected finalist in the Rarescale Alto Flute Composition Contest and performed at the Royal College of Music in London, England.

She draws on her deep faith for much of her work. Among her works in progress are Epiphaneia, for symphony orchestra; A Soul’s Journey, which is an orchestrated version of her chamber opera; and The Gospel of Mary Magdalene, an oratorio. 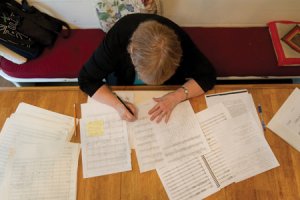 “In February, 2010, I had just completed the third song in my song cycle, Song of the Virgin, when I realized that my music has become part of…the New Spiritual Music,” Mitchell recently wrote in her memoirs.

“My style of composition seems to be evolving again, as characteristics of the New Spiritual Music are appearing, perhaps from my unconscious, and are being integrated into my previous style.

“These characteristics include repetitiveness, especially in the use of patterns, a post-modern approach to tonality, and an intuitive and emotional sensibility.” When she describes the changes in her music, she explains that in the early years, her music was more intellectual, while today, her music reflects more of her poetic side.

While her own music continues to grow and take shape, in 2002, she was asked to put together a publication about music produced and performed throughout the Midwest. She was to serve as guest editor for the Music in the Midwest edition of the Platte Valley Review, a UNK scholarly journal which features a new theme in each issue.

“Music in the Midwest seemed like such an exciting and accessible topic,” she said. “I was very enthusiastic about it. I imagined articles, essays, poetry, artwork, photos and musical examples that would present a complete and diverse cultural view of Midwestern music making.

“This all-encompassing view would span from music of the people to the music of the concert hall and university; music of the Native Americans of the Great Plains; folk music and church music of the many ethnic groups that settled the prairie…I soon discovered the impossibility of being universally inclusive. There was simply too much.”

In the end, she produced a 177-page issue that included prose, poetry and musical scores, all centered on the Music in the Midwest theme. And, for the first time, the publication featured a CD.

The Music in the Midwest theme seems a good fit for Mitchell, whose support for women composers led her to found American Women Composers-Midwest. The Chicago-based organization performs and champions work by women composers, Mitchell said, adding that the group was established, in part, because the Chicago Society of Composers was an all male group—until Shulamit Ran and she were invited to join, or as Mitchell said, with a smile, “We infiltrated.” Still, she saw the need to establish a group for women composers.

“I’d also like to be remembered as someone whose door was always open to students, helping students solve problems.”

Mitchell, who began playing piano at the age of eight, said: “I started writing almost as soon as I began playing— shuffling dots around on a page.” In her composition classes, she tells her students to pick five notes and then begin to move the notes around.

“After a few days, they pick 10 combinations they like. I tell them to organize them—consonance and dissonance. Organize the flow of tension. Some books call it the ‘emotive curve.’” And the music begins to take form.

“Write them until you dream them,” she instructs her students.