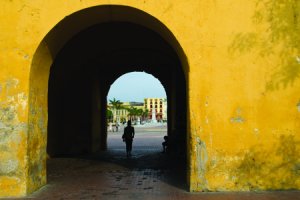 Neither Avilés nor his mother could have imagined on those family vacations that he would one day be a UNK associate professor of political science known for his research and expertise on politics in Colombia and throughout Latin America.

“I’m trying to understand the role of the military,” Avilés said. “How it contributes, or how it detracts, from a democracy.” The role and limits of the military are well-understood in established democracies.

“But that line in the sand has absolutely been destroyed in some places,” he said.

Already the author of a 2006 State University of New York Press book titled “Global Capitalism Democracy and Civil-Military Relations in Colombia,” Avilés plans to publish a new book, “Globalization and Military Power in the Andes,” in December of 2010. Both books are written for graduate students and faculty members at U.S. and Latin American colleges and universities.

Avilés said that he hopes some of those students will carry the information with them into careers as diplomats, politicians or activists. Closer to home, Avilés said that he hopes his work will contribute to recent debates surrounding U.S. and Nebraska trade relations with the region. Countries such as Colombia, which is seeking a free trade agreement with the United States, represent potentially profitable markets for Nebraska exports. Understanding the quality and strength of its democracy is central to whether such a free trade agreement will be implemented given the priority that some in Congress give to human rights. 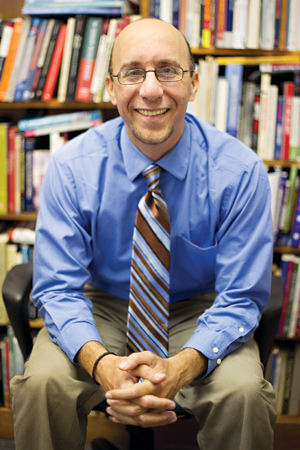 Avilés had an early interest in current events. “I got into a habit in high school of reading the newspaper with my folks,” he said. “Looking back at that time, I could see that my interest was getting piqued in what was going on in the world. ‘60 Minutes’ was always on TV each Sunday night.”

As a child, he grew up in a Miami suburb. His mother was a high school graduate who worked in retail sales, and his father, who earned a general equivalency diploma in the 1980s, worked many different jobs. His father was born in Queens, N.Y., into a family whose ancestors immigrated from Puerto Rico in the early 20th century. Originally, his mother saw him as a potential lawyer, but later concluded that he was a natural teacher.

“It was a constant mantra from my folks, ‘You will be going to college,’” Avilés said, noting that his younger brother will be earning a doctorate in sociology within the next year or two. Avilés earned a bachelor of arts degree from Florida International University in 1993, and went on to earn his master’s and doctorate degrees from the University of California at Riverside. After one year as a visiting assistant professor at Vanderbilt University, he joined the UNK faculty in August of 2002.

His interest in Latin American politics was narrowed in graduate school when he chose a dissertation topic that focused on civilian-military relations in Colombia. Since then, he has expanded his research to include the Andean region and variations in their democratic governments.

Avilés said there was a shift in all of Latin America in the 1970s and 1980s away from authoritarian governments in which the military played a key
role. “One country after another was adopting a democratic type system,” he said. “Some are more democratic than others, and none is exactly the same.”

“In the 1990s, Colombia was really standing out as an exception…in a negative way,” he said, explaining that while other countries were resolving their internal conflicts, Amnesty International still was sounding alarms about violence, armed guerrilla and paramilitary groups, drug trafficking and assassinations of political candidates in Colombia.

Yet unlike other countries in the region, Colombia avoided a military government. He said one case made for the emergence of armed guerilla groups was that Colombia’s democracy was not open enough.

“There are different types of weak democracies” in Latin America today, Avilés said. “Where they fall short varies. Some are defined as electoral democracies. For example, Colombians elect their leaders and have a relatively free press.” 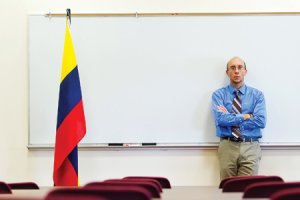 In Venezuela there are elections with multiple parties and opposition leaders serving in government. However, Aviles said, President Hugo Chavez uses his power and strong rhetoric to vilify the opposition as traitors. According to Avilés, a major concern about the military in Venezuela is that many retirees have moved into government positions that have nothing to do with military expertise.

In contrast, Colombia has checks and balances that exist and are real, plus multiple political parties and a military that maintains order. “Where Colombia falls short is in the area of civil liberties. For example, it’s one of the world’s most dangerous places to be a unionist,” he said. Colombia is also known for the “false positive scandal” in which soldiers are accused of killing innocent citizens and dressing them as guerillas to earn benefits such as time off or pay bonuses. While Avilés was recently in Colombia with a student group, he and the group met with 15 women, all of whom said that they had male relatives killed in the false positive scandal. The women talked about losing loved ones and trying to find out what happened to fathers, sons or brothers who were not guerillas.

Avilés said a 2009 United Nations study concluded that the actions, such as those that took place in the false positive scandal, were not a complicit policy of the government, yet it is estimated that more than 1,000 such killings took place over four years and more than 2,000 in the past decade. The government of President Alvaro Uribe removed the accused from the military, but Colombians still have not seen any convictions.

“The military has enjoyed a degree of impunity,” Avilés said. “It hasn’t been the best in punishing those caught up in these kinds of scandals.”

Colombia remains known for drug trafficking and still is said to supply about 90 percent of the cocaine sold in the United States. He said some regions are “governed” by guerillas who protect the drug trade, but efforts by Colombia’s military, with U.S. assistance, have made the country safer from narcotics-related violence.

The killing of people who are seen as leftists, socialists, communists, or union or farm organizers still continues. Avilés said right-wing militia are involved who may work with the military or with narcotics terrorists who want their land protected.

Economic inequality is a continuing problem throughout Latin America. He said Colombia is in the world’s bottom 10 in income distribution, which contributes to political violence and major infrastructure issues throughout the country.

Avilés’ current research and new book looks at the Andean countries of Bolivia, Ecuador, Venezuela and Peru that do not have narcotics trafficking or armed guerillas trying to overthrow their governments.

Colombia’s efforts to reduce violence have produced some positive results, including more tourism and foreign investment. “But there hasn’t been enough done to redistribute the wealth,” he said. A free trade agreement with the United States is awaiting congressional approval, which Avilés said will advance if Republicans recapture the majority in the House of Representatives in November elections.

In all, he has made three trips to Colombia as a researcher and teacher. Most recently, he led a UNK group there in May (2010) during the week leading up to the first round of presidential elections. In June, former Defense Minister Juan Manuel Santos won with 69 percent of  the vote. Santos oversaw several counterinsurgency campaigns under Uribe’s administration.

The UNK travelers visited polling places on election day. They watched protests and a political rally, and heard presentations by U.S. Embassy representatives and Colombian government officials, university professors, and leaders in social issues such as union membership, health and the drug trade.

UNK senior Erik Dodge, who has a double major in journalism and political science, said that the presentation on his first day in Colombia probably made the most lasting impression. “There’s no way I can do that in a classroom or that they (students) can read about it,” Avilés said about the impression such encounters make.

Dodge said he initially signed up for Avilés’ class for the opportunity to travel. Then he became interested in the humanitarian situation in a country with a huge population of internally displaced people. He also wanted to know more about the billions of dollars in U.S. aid sent to Colombia over the past decade.

Avilés said that he hopes the UNK students, even those not pursuing political science-related careers, came home knowing they can explore other countries.

“Avilés is an extremely intelligent and effective teacher,” Dodge said. “He demands and gets a lot out of his students. His passion for research on Latin America can be seen in his work.”

“They have a political agenda as well,” Aviles said. “They don’t really trust the Colombia government to do the right thing.”

Aviles’ articles and books have earned him numerous invitations as a conference speaker. Earlier this year, he spoke to Florida International University students who have his first book on their required reading list, and he was a presenter at the Western Political Science Conference in San Francisco.

At the 2007 Latin American Studies Association Conference in Montreal, his topic was “Civilian Control in the Andes: The Cases of Colombia and Peru.” Avilés is scheduled to take part in a conference on global capitalism in New York City in March of 2011.  His writing projects have included a “Colombia” entry in the “International Encyclopedia of Human Rights” in 2009, plus numerous articles and book reviews for “Latin American Perspectives” and other publications focused on the region.

Avilés continues to study the political puzzles that make some Latin American governments more democratic than others. His research tools include government documents, human rights reports, and interviews done by telephone, e-mails or in person.

In the end, Avilés’ work has not only found an audience on a national and international level but has also helped to bring his mostly Nebraskan students closer to the countries, peoples and conflicts that are ongoing throughout Latin America.

The official name of the country is Republic of Colombia. Colombia covers an area of about 440,000 square miles and is the fourth largest country in South America. The total population is just over 46 million. Spanish is the dominate language.  The capital is Bogota with a population of more than 7 million people. Other major population areas include the cities of Medellin, Cali and Cartagena. The terrain in Colombia varies from rugged mountains to coastline on the Pacific Ocean to flat grasslands.