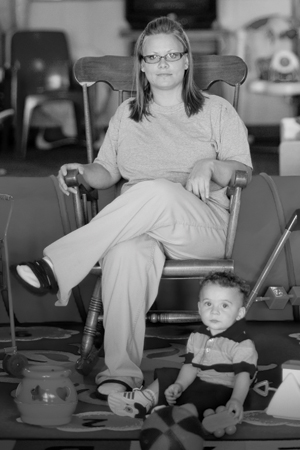 Ryan is almost ready to walk. The active and curious 9-month-old crawls on furniture, pulls himself onto his stocking feet and looks around, wondering if Mom’s watching for his next big move.

His 30-year-old mother Susan sits nearby in a rocking chair, getting up every few minutes to point Ryan in a new direction. “Where you going?” she asks him often, and when their eyes meet both of them smile.

Susan is like millions of other mothers, in so many ways. But when it is time to tuck Ryan into his crib with the dinosaur sheets and the cream bumper pad, she’ll sleep only inches away on a standard-issue cot. And they’ll both be locked inside the nursery unit at the Nebraska Correctional Center for Women. (Ryan and Susan are not their real names. The names have been changed to ensure privacy.)

State officials across the nation are taking a hard look at prison nurseries, and more are considering such programs, partly because of Dr. Joseph (Joe) Carlson. A UNK criminal justice professor, Carlson has published findings from a 10-year evaluation of Nebraska’s prison nursery. His data strongly support the idea that by keeping newborns with their incarcerated mothers, prisons can reduce misconduct and recidivism, as well as possibly help keep children out from behind bars when they grow up.

“I came out (of the 10-year study) a firm supporter of the concept,” Carlson said. Among other findings, Carlson showed the program reduced recidivism by 33.2 percent.

The Nebraska Department of Corrections contacted Carlson soon after he came to UNK in 1993. The York facility’s nursery program became the second such program in the nation when it started in 1994. Mary Alley, agency parenting program coordinator, said officials who put the nursery program together wanted Carlson’s input from the start, so they would know what relevant data to collect from and about the inmates. 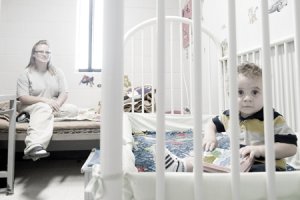 “Part of what we proposed to do with the grant money, which initially funded the nursery program, was to keep records, and we would be able to show there’s a purpose to the program,” she said.

Results of the 10-year evaluation were published in spring of 2009 in an article titled “Prison Nurseries: A Pathway to Crime-Free Futures” in Corrections Compendium. The article has brought national attention to the concept of prisons nurseries, and to Carlson. He was quoted and his research was featured in articles for Newsweek, Readers Digest of Canada and Marie Claire. In addition, prison officials from as far away as New Zealand have contacted him for information, and a publisher interested in having Carlson write a book about the study is currently reviewing his articles.

Carlson said he had no bias for or against the program going in, partly because so little information about prison nurseries existed. While New York’s Bedford Hills and Taconic correctional facilities have had nurseries since 1902, Carlson said very little data has been published about them. What do exist are short-term studies, which compare the participants’ recidivism to the rate for all women inmates, rather than to a similar population–other inmates also having babies in prison. Nebraska’s study compared the nursery program participants’ recidivism rate to that of other incarcerated mothers who were forced to give up their babies.

Carlson began by collecting data on 30 inmates who had babies in the three years before the program was implemented. As women entered the program, Carlson collected similar data on them. He tracked subjects’ prison records for reports of misconduct or re-incarceration, and administered surveys to measure participants’ perceptions of the nursery program.

Information was collected through December 2007. While the initial collection work was done at the prison, Carlson said prison staff and officials, including Alley, and nursery program director Renee Uldrich, supplied data via phone or e-mail.

From the first group of 30 mothers, 50 percent violated parole or committed new crimes. In contrast, only 16.8 percent of the first 65 women who went through the nursery program had such violations. While the recidivism decline may be the study’s most important finding, Carlson said data shows the program also had a positive effect on participants’ conduct while in prison. From 1994 to 1996, the number of misconduct reports fell 13 percent for women who had been in the general population and were placed into the nursery program.

After 1996, women were placed directly into the nursery living area after they were approved, so numbers could not be compared over all 10 years. In 2004, however, Carlson noted there were no misconduct reports for the eight women in the nursery program, while 62 percent of the general population received reports.

Carlson’s study also noted that Nebraska achieved these results at a minimal cost. The grant that established the program was for $24,800, which was supplemented by the Nebraska Legislature. Alley said the current budget for the parenting program–which also includes costs associated with day and overnight visits by older children and a Fatherhood Initiative for male inmates–is $102,000.

“The study found a decrease in recidivism and misconduct, at a very inexpensive cost to the state, and that’s influenced other states,” Carlson said, adding that prisons everywhere are looking for answers to similar issues.

With the evaluation complete, Carlson said he and another researcher, Dr. Julie Campbell, who is an assistant professor in the UNK criminal justice department, have begun a new project. They are contacting prison officials around the country to find out what needs of women prisoners they expect will have to be met over the next 10 years. At the same time, Carlson said, they are looking at states that do not have nursery programs, to determine why those states do not have similar programs.

“Our initial findings are that state officials aren’t aware and are under the false impression the program would be more costly than it is,” he said. 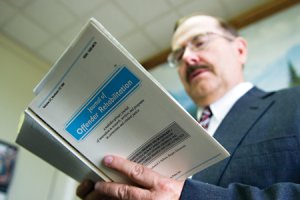 Prisons are dealing with an increasing number of women who have just had children, or who give birth during their incarceration. Alley said when she started her job 20 years ago, there were about 70 inmates. In the spring of 2010 there were 278, and, at times, the population has exceeded the maximum of 300. Officials are looking for ways to keep those women from repeat offenses and to avoid having their children return later, as inmates.

Between 1994 and 2008, according to Carlson’s article, nine other states instituted nursery programs. Eight of those states – California, Illinois, Indiana, Massachusetts, New York, Ohio, Washington and West Virginia – allow inmates to keep their babies with them for 12 to 24 months. In South Dakota, babies may stay with their mothers for only 30 days.

Alley said since Carlson’s findings were released, officials from several other states have called or visited the Nebraska facility. “Most states want something about this size, and they want to see how this runs,” she said.

Though Carlson’s study demonstrated clear benefits from the nursery program, he said there is more data he would like to have. For example, whether participants committed new crimes in other states and whether they retained primary care of their children. There is also no way to follow up on the children who started their lives in the prison nursery, though some would be teenagers by now.

Given the mothers’ response to the program, however, Carlson said there is good reason to believe the nursery experience can help them and their children after their release from prison. Ninety-five percent of the inmates said they felt they had a stronger mother-child bond because of the program and that the parenting classes had helped them.

Jane, who was in the nursery program for 17 months, said the day before her release she was grateful to have had the parenting classes to help her care for son Nate. Though she had three other children before being sentenced on drug charges, she said the classes gave her a lot of new ideas and tools to use this time around, especially when it came to discipline.

“The women here are so supportive,” explained Mandy, who gave birth to her third daughter while in the program. She said in the roughly 10 months she has been in prison, she has learned about parenting not only through the classes, but from other mothers. Though she has taken care of babies before, “I still have questions,” and there is always someone who can answer them.

Mandy said she suffered with postpartum depression after the birth of her other daughters, but did not this time around.

Like many of the mothers, Ryan’s mother Susan was in the substance abuse unit of the prison before coming into the nursery. She said she was a drug addict for 17 years, and was sentenced for robbery, distribution and possession of a controlled substance. While waiting in jail for her sentencing, she worried about what would happen to her baby.

“I think we’re all blessed” to be in the program, she said.

Those experiences support the theory behind nursery programs, which Carlson said is that women who get to bond with their children become better parents. “The concept is that if the mother bonds with the child, the mother will hopefully refrain from committing other crimes, and if (children) don’t have the attachment to the mother, they will be delinquent,” he said. This program can make a life-altering difference for both mother and child.

“The concept is that if the mother bonds with the child, the mother will hopefully refrain from committing other crimes, and if (children) don’t have the attachment to the mother, they will be delinquent,” Carlson said. This program can make a life-altering difference for both mother and child.