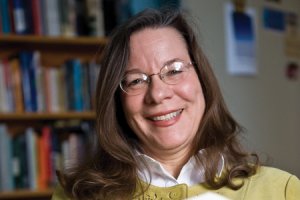 UNK’s Benzel Gives “New” Song to Prairie Poet’s Work. An award-winning researcher, accustomed to publishing her work in books and prestigious academic journals that can be found on the shelves of major libraries across the nation, has found herself in a place far outside her comfort zone—sharing work of an American writer on the stage.

Dr. Kate Benzel’s six books, and more than 22 articles, printed in international, national and regional publications, have focused on British modern literature, most often on British author Virginia Woolf. However, it is her concern about American writer Carl Sandburg that has taken her in new directions.

A professor in the UNK Department of English, Dr. Benzel said, “Today, Carl Sandburg is all but forgotten amidst the new technologies and curricula that wrap words through virtual space. His visceral depictions of hardworking people, their vital environments in the city and on the land, do not fit easily into contemporary critical theories of poetry and literature. His poetry seems almost too simple for any critical analysis, and his politics too obvious for today’s complex political machinations.” 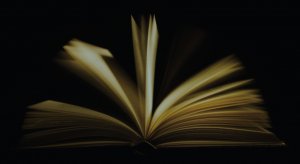 Her recent research, she said, is an effort to recover Carl Sandburg (1878-1967) from the depths of American literary history and to suggest that his writings—poetry, journalism, reviews, biography of Abraham Lincoln and folklore—embody the essence of American culture: hardy work ethic, simple colloquial speech, deep respect for the landscape and belief in the power of the people—all qualities of American democracy.

“One of the things I discovered was that he has been forgotten, dropped off the literary landscape. Even an eminent American scholar forgot to include Sandburg in his recent six-volume anthology of American literature,” she said. But she hasn’t forgotten Sandburg, nor will most Nebraskans if it is up to her. Dr. Benzel is leading a revival of Sandburg’s works—more specifically, his prairie poetry and The American Songbag.

“I noted that very little attention was given to Sandburg’s poetry about the prairie, and to his compilation of American folk songs in The American Songbag, both of which I believe confirm him as ‘Poet of the People,’” Dr. Benzel said. “Sandburg performed his vision of the American song and slogan throughout the United States in community venues where everyone was invited and participated. He had a special style of lecture-recital whereby he would read his poetry and play American folk songs on his $25 guitar to create a performance that ‘wouldn’t bore the audience.’”

Her research on Sandburg took her to the Sandburg Collection at the University of Illinois at Urbana-Champaign Rare Book and Manuscript Library. 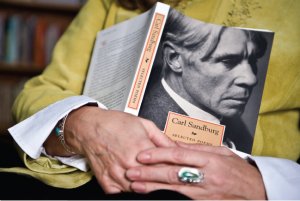 “I love archival work—whether it is about Woolf or Sandburg,” she said. “The (Sandburg) collection, which hasn’t been completely cataloged, is mammoth. I discovered a wealth of material on his early career as a platform performer and lecturer. He would copy down notes and stuff them in his pocket. As I did research, I would open a folder and find wadded-up, crumpled pieces of paper.” She also found that Sandburg’s prairie poetry is seldom published. What most seem to remember are his Chicago poems and the Abraham Lincoln biography.

“If that is all you know, you miss what Sandburg is all about,” Dr. Benzel said.

As she continued her research, she realized that “the obvious thing to do would have been to write an article that goes into a journal and ends up on a library shelf. “(But) as you get older, you reflect on your place in the universe. You begin to see that your value as a teacher or researcher doesn’t take place only in a classroom or at professional conferences. Though my research methodology had not changed, I decided to do something different with my Sandburg research—to combine its presentation with a public venue.”

In 2006, with the support of grants from the Nebraska Humanities Council and the UNK Research Services Council, Dr. Benzel began a process that would let her present her work in a way that was new for her, a presentation that has become known as “The Sandburg Project.”

“The Sandburg Project evolved from this simple idea of community, bringing together a group of people—performers and audiences—to celebrate American culture,” she said.

“At the risk of seeming artificially patriotic, this project reminds audiences of their roots and national heritage.”

Out of that collaboration, they developed a script to replicate Sandburg’s own lecture-recitals. Dr. Peek, who has an international reputation as a scholar of both William Faulkner and Willa Cather, became one of the voices for the presentation.

Adams, who created musical arrangements of selections from The American Songbag for the presentation, became the second. And, Dr. Benzel became the third. The format of each performance has Dr. Benzel serving as a moderator, and giving a pre-performance presentation about Sandburg and his works.

Although she is comfortable within the confines of a university classroom, speaking in front of an audience of the general public was a new experience, she said, explaining, “It was something I had to learn to do.” In June of 2007, the three first brought Sandburg’s poetry and songs to life on the Red Cloud Opera House stage. With seating on a first-come, first- served basis, the doors opened on a warm Sunday afternoon for the first performance of what had become “Prayers for the People: Carl Sandburg’s Poetry and Songs.”“Both performers brought to the project a wealth of literary and musical expertise, and a real connection to Nebraska,” Dr. Benzel said of Dr. Peek and Adams. The trio’s second performance came two months later on the stage of the Theatre of the American West in Republican City. With the support of a Nebraska Arts Council grant, the three then took the project beyond the two summer performances to the Merryman Performing Arts Center stage in Kearney the following fall. For that performance, they expanded the group to include Nebraskan Ted Kooser (U.S. Poet Laureate 2004-2006) and Adams’ musical group, The Sandtones, comprised of musicians Cristina Seaborn, a fiddler from Minnesota, and Kearneyites Terry Sinnard on bass, and Mike Metzger on banjo and mandolin.

At the Red Cloud Opera House, Theatre of the American West and the Merryman Performing Arts Center, people from the theatres, from the community and the performers all worked together to re-enact Sandburg’s vision, she said, adding, “The program gained immediate attention, because it reached people with the simplicity of the American voice.”

Nebraska Educational Telecommunications and UNK saw the value of bringing the program to a larger audience and created a partnership to film an encore performance at the Merryman. In addition, a series of companion workshops on poetry and songwriting were developed, and offered the day before the performance. The workshops, which were funded by a Nebraska Humanities Council grant, took place at the Frank House museum on the UNK West Campus.

Dr. Benzel brought the participants together to work with professionals one-on-one and in small groups to create their own songs and slogans. Dr. Peek, and UNK Reynolds Chair in Poetry Allison Hedge Coke, coordinated the poetry workshops, “Poetry for the People” and “Literary Landscapes.” Adams produced a lyric writing workshop called “World Melodies.”

Poems and songs from the workshops introduced the evening, and the performance combined readings from Sandburg’s poetry along with traditional American folk music from The American Songbag. Poems such as Sandburg’s “Prairie,” “Boes” and “Omaha” were combined with folk songs “John Henry” and “St. James Infirmary.” Kooser read several of his poems, including “So This Is Nebraska,” and Mike Adams performed “Sartoria,” a song written for the performance.

Partial funding for the encore performance came from the UNK Department of English, the Marlene and Vern Plambeck Foundation, the UNK College of Fine Arts and Humanities, and the Nebraska Arts Council.

In describing the encore performance, Dr. Benzel said, “The performance of ‘Carl Sandburg’s Poetry & Songs: Prayers for the People’ was another success. And by all accounts from Nebraska Educational TV, they had a great shoot.”

On a Sunday afternoon a few weeks after the encore performance, the group—Drs. Benzel and Peek along with Adams and Sinnard—took the program to Broken Bow where they performed in the Custer County Community Center.

They were hosted by the Custer County Friends of the Arts. In February of this year, they were invited by McCook Community College to perform at the Fox Theater on Norris Avenue. For that presentation, they were joined by Nebraska State Poet (1982) William Kloefkorn and area musicians. Then, in April, during National Poetry Month, the performance aired on NET-TV.

“The nice thing about The Sandburg Project is that it can be adapted to different situations,” she said. “And it is a lot more rewarding than seeing things in print. Six months after we’ve performed, people walk up to me and ask when we’re going to do it again. No one did that when I wrote a book on Virginia Woolf.”

What’s next? Dr. Benzel said she would like to take the performance to Illinois and North Carolina where Sandburg lived and wrote. Currently, she has been working with the Rare Book and Manuscript Library at the University of Illinois at Urbana-Champaign on another Sandburg production to complement their Sandburg holdings. And then there’s Woody Guthrie.

“I’m envisioning 1930s America and ways to document the American spirit through folk music,” she said. “Guthrie was not the first American folk musician, but he was what I would call the first American singer-songwriter; he opened the door for contemporary musicians like Bob Dylan and Bruce Springsteen.” She has already presented “Woodie Guthrie’s History and Heroes” at the Willa Cather Spring Conference in Red Cloud.

Unlike work on a shelf or the Internet, waiting to be found by other scholars, Dr. Benzel is following in the footsteps of Carl Sandburg. She is taking her work to the people.