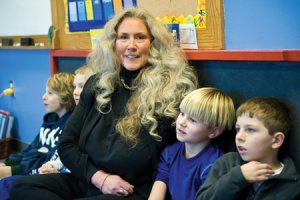 Attention Deficit Hyperactivity Disorder, commonly known as “ADHD,” has become widely-accepted as a serious mental disorder—mostly afflicting young males. At the very least, the experts say, ADHD disrupts the learning processes, and at worst, produces violent and anti-social behavior. However, is ADHD, indeed, the serious malady it is said to be, requiring equally serious and extensive drug therapy? Or, as questions Dr. Jeanne Stolzer, associate professor of family studies, is it more likely merely a manifestation of male patterned hominid evolution. Challenging widely held assumptions is an important part of what investigators do, especially on important topics like childhood development.

Dr. Stolzer, a member of the advisory board for the International Center for the Study of Psychiatry and Psychology, has published her work on three continents. She is also the sole author of the ADHD entry in The Encyclopedia of the Life Course and Human Development (2009). Most recently, she has questioned conclusions of previous research on ADHD in an article titled “Boys and the American Education System: A Biocultural review of the Literature,” (Ethical Human Psychology and Psychiatry; An International Journal of Critical Inquiry, November 2008). Here, as well as in her previous presentations, Dr. Stolzer challenges her professional colleagues, and even the American Psychiatric Association (APA), on the reliability and validity of their findings and official statements about ADHD. 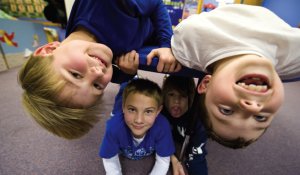 Dr. Stolzer maintains that in the 1950s, ADHD did not exist. (“The ADHD Epidemic In America,”Human Psychology and Psychiatry, Volume 9, Number 2, 2007). In 1970, 2,000 American children were diagnosed as “hyperactive,” and the standard method of treatment was behavior modification. By 2003, six million American children had been diagnosed with a “brain disorder” called ADHD, and the vast majority of these children have been prescribed psychotropic medications in order to control their disruptive behavior (Stolzer 2005, p. 37). Subsequently, she’s asking the medical field and society at large: “Do millions of American children actually suffer from unprecedented brain disorders? And, if so, what could have altered the developing brains of our children to such an extent that millions of American children are diagnosed with “disorders of the brain” when only a generation ago this epidemic was unheard of? Moreover, how have we successfully convinced academicians, physicians, teachers and parents across this country that what was once considered typical, normal and desirable boy behavior is now the result of an atypical brain?

According to Dr. Stolzer, after a decade of research on the issue, the answers to these inquiries are partly based on the phenomenon of macrosystemic functioning— that which consists of overarching patterns found in a given culture, like ideologies, world views and belief systems. Dr. Stolzer says that America’s macrosystem, on the subject of ADHD, has been greatly altered over the last generation. “What were once regarded as normal-range child behaviors are now defined as ‘disorders of the brain,’” she said.

She remembers laughing, nearly 30 years ago, at how the little boys in her preschool class climbed fences, yelled at the top of their lungs and battled out mock wars on the merry-go-round, while across the playground, most of the little girls were dialoguing, conducting interpersonal communication and acting out dramatic play. She said that she took joy in observing the freedom of kids being kids while at the same time asking herself, “What would be the motivating force behind our trying to make our children into passive, sedentary robots?” 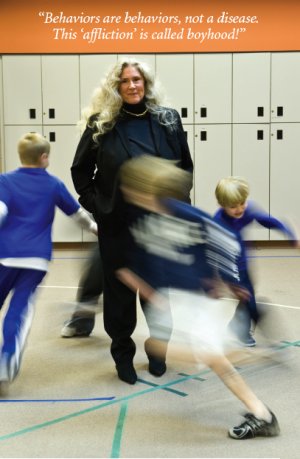 During this time of Dr. Stolzer’s foundational observations, the era of the SuperMom was also building. “Our country’s children were going to day-care from six-weeks-old, attending overcrowded classrooms and waiting at home for their tired parents to get home from work,” she said. “Working moms were, understandably, physically, emotionally and psychologically, drained, and, thus, vulnerable and much more likely to accept labels about their child to justify their exasperation with their child’s energetic behavior.” Now, as we as a society begin to acknowledge these histories and changes, Dr. Stolzer wholeheartedly suggests that “instead of it being the “disordered child” we medicate with a chemical that changes the neurological structure of the brain, perhaps we need to look at the disordered world we have created for our children in 21st century America.”

In “ADHD in America: A Bioecological Analysis,” (Ethical Human Psychology and Psychiatry, Volume 7, Number 1, Spring 2005), Dr. Stolzer suggests that perhaps relationship changes occurring within the microsystem—defined as a pattern of activities, roles and interpersonal relationships experienced by the developing person in a given face-to-face setting with particular physical and material features—have made parents more willing to accept the “myth” of ADHD.

As a mother, Dr. Stolzer entertained the premises of ADHD for a time, too. Like so many parents, she remembered the experiment where child psychologists observed a random group of boys and girls in a room full of all kinds of toys, from trucks to baby dolls. With no outside influence, the majority of boys, if not all, went straight to the wooden guns and plastic battalions of soldier figures, while the girls proceeded to plan parties with the tea sets and Barbie dolls. “When I tried to ‘socialize’ my son, in a similar manner as this famous experiment,” Dr. Stolzer said, “he still insisted on being a boy.” If Dr. Stolzer offered her son a doll to play with, for instance, he was enthusiastic-enough about the idea; it’s just that he was inspired to play with it by wielding it around like a sword in aggressive, combative-like play.

For Dr. Stolzer, the kicker in this discovery was her realization that what she means by “insisting on being a boy” seemed to parallel the behavior the APA (Diagnostic and Statistical Manual of Mental Disorders, DSM-IV), lists as the symptoms of the still-relatively-new disorder, ADHD. “These are not symptoms,” Dr. Stolzer said. “These are behaviors—normal behaviors that have been recorded in young males across cultures, across time and across mammalian species.

“The prefrontal lobes aren’t fully developed until the early 20s in males. Testosterone during puberty increases 18-fold. Couple these facts with an underdeveloped brain and the surge of hormones, and what you have is lack of impulsivity control, a high activity level and defiant behavior. Furthermore,” she said, “behaviors are behaviors, not a disease. This ‘affliction’ is called boyhood.” (Stolzer 2005, p. 78)

Dr. Stolzer argues that although many American medical professionals insist that ADHD is neurologically induced, the fact of the matter is that there are no physiological, cognitive or metabolic markers that would indicate the presence of ADHD. Rather, “ADHD is diagnosed using a checklist of behaviors indicated on a questionnaire, usually filled out by teachers or parents.” (Stolzer, 2007, p. 39)

Eighty percent of the Ritalin prescriptions issued to the 8 – to -10 million American children diagnosed with ADHD are given to American boys. Dr. Stolzer writes: “It has been hypothesized that the behavior of boys has remained relatively constant over evolutionary time; what appears to have changed is a) America’s perception of those unique and historically valued evolutionary behaviors and b) Americans’ willingness to unconditionally accept the newly formed disordered brain hypothesis.” (Stolzer, 2007, p. 42)

“Interestingly,” Dr. Stolzer said, “ADHD rates in child populations vary considerably from school to school; private schools that, incidentally, do not benefit economically from labeling students tend to have much lower rates of ADHD in their populations.” (Stolzer 2005, p. 70). Well-aware of the polemic tone in her experiential research, Dr. Stolzer said she fears that because of the financial incentive involved, ADHD diagnoses will continue to skyrocket in the U.S.

Once the ADHD label is affixed, Dr. Stolzer said, children are no longer viewed as normal. “And labels don’t go away,” she said, observing that “all school shooters have been therapeutic users of psychotropic medications. The manufacturer clearly states that psychotropic drugs can cause homicidal and suicidal ideation and violent psychotic episodes.” The fact of the matter, Dr. Stolzer maintains, is that professionals have no idea of the long term outcome of taking substances like Ritalin for a condition like ADHD.

The ADHD model, she said, does not take into account the complexities associated with growing up in modern-day America, nor does it address America’s unique and bioevolutionary heritage. “Hypothetically speaking,” she said, “it is a possibility that millions of American boys suffer from a neurological condition known as ADHD. Scientifically speaking, it is much more rational to assume that ADHD-type behavior is evolutionarily adaptive, has been perfected over millions of years, and has ensured the survival of the human species.” (Stolzer 2007, pp. 42-43)

She concludes, “Simply put? I don’t think ADHD is anything that can’t be ‘cured’ by a loving hand, logical consequences, time and attention, large amounts of rigorous outdoor play and the understanding that boys do not now, nor have they ever, followed the script set forth by their female cohorts.”

Dr. Stolzer is now looking for possible alternatives to Ritalin that American’s, as a society, might consider. She is also analyzing the implications of restructuring some of the societal approaches. For instance, she encourages more homeschooling and advocates testing for the possibility of ADHD in candidates from a neurological perspective rather than a behavioral one. And, finally, she promotes continuing education of the public about evolutionarily-based gender differences. “We must demand that unbiased empirical scientific data are guiding us. After all,” she said, “what is research if it is not to change something that you care about, for the better? Isn’t that why we are all here on a campus—the arena for free and boundless thought?” Dr. Stolzer said that authentic research–which, by her definition is, among other things, research not funded by pharmaceutical companies–must be the goal. (Stolzer 2007, pp. 40-41 and Stolzer 2005, p. 72)

If there ever is a time when she doubts the worth of her scholarship, she reminds herself of the volumes taught to her one day in church by a wise old lady. A little boy in the next pew was growing restless, after sitting quietly for a long span.

“The dear old lady leaned into me and whispered, ‘Honey, that little one has ants in his pants. He needs to get out and play!’”