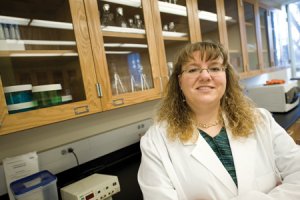 Dr. Kim Carlson could be the poster child for UNK’s trend-setting research program. Her story of the journey that has brought her full-circle to her dream job—a tenured UNK associate professor of biology—is an example of the value of the program, in perfect form.

Dr. Carlson completed her undergraduate and master’s degrees at UNK and the Ph.D. at the University of Nebraska-Lincoln (UNL). During all of this time, it turns out, including a “little diversion” discovering potentially HIV-preventing genes at the University of Nebraska Medical Center (UNMC) in Omaha, she was preparing to return to her true-blue alma mater, UNK, as a professor-scholar.

While conducting post-doctorate work for two years, and then working as a research assistant for three more years at UNMC, Dr. Carlson was a key player in the development of the center’s core proteomics faculty. (Proteomics is a branch of molecular biology, analogous to genomics, concerning protein sets in organisms.) This opportunity allowed her the privilege of working with some the world’s best scientists in life-changing HIV research.

In essence, Dr. Carlson and her colleagues discovered a new gene. Moreover, they found that the gene appeared to be connected in a significant way to a better understanding of HIV. The scientists knew at the start, from their previous study of postmortem brain tissue, that the gene “turned itself on a lot” while “shutting off other genes” in brains with severe HIV infection. For example, Dr. Carlson said, “when the body wants to produce an eye, it turns on the genes for eye development in the facial region of the head and shuts off the genes for limb development in this same area. The process-regulating gene that was discovered is a transcription suppressor, meaning it shuts off genes instead of turning them on.” 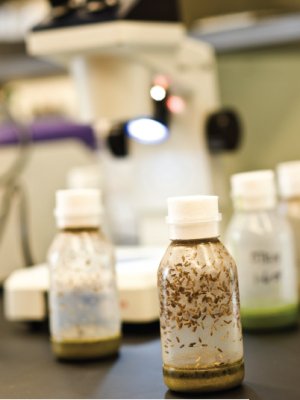 Dr. Carlson and her colleagues probed further. They chose donated healthy human white blood cells as their subject vessel, and, within a Petri dish, infected the cells with a type of virus called an “adenovirus,” that contained the new gene. “What we were trying to do,” Dr. Carlson said, “is get the cells to produce a lot of the protein made by our gene. This is the same type of technique that would be used for human gene therapy.” After the initial infection step, the scientists infected the cells with HIV.

“What we discovered,” Dr. Carlson said, “is that we suppressed the HIV level down to that of cells not infected with HIV.” The scientists realized that when the level of expression of the gene is over-expressed or increased, HIV is unable to replicate or persist in the monocytes (white blood cells). They immediately applied for a patent for their discovery of the functionality of a newly-uncovered gene—referred to as OTK18—after the Japanese group of scientists who first sequenced it as part of the Human Genome Project.

The number 18 is the clone number that was sequenced. In fact, there are two patents for the functionality of OTK18. One is for the discovery itself, and the other is for its use as a pharmaceutical agent. The latter was recently approved. OTK18 is also patented as a treatment for HIV. Neither patent, however, has yet been approved for sale or use in humans. This patented process could possibly be used in humans at some point in the future, after more testing, including human trials.

After this research-and-discovery experience, Dr. Carlson remembers thinking that what she really wanted to do was teach. Granted, she had done some teaching every semester and summer while pursuing her Ph.D. During her time at UNMC, she carried a pager, 24/7. “Here I was, a fruit-fly (research) person at heart,” she said, “being summoned to autopsies. I knew this wasn’t an area in which I could make a difference, nor was it a schedule conducive to my private life. So I threw the batteries out—not the pager; it was university property,” she said with a wink, “and started making concerted changes that would steer me to the full-time kind of teaching situation I had always longed for.”

Undoubtedly, Dr. Carlson had her ideal situation securely set in her mind. She wanted to be at a teaching university that achieved its mission through up-close and personal mentoring and research opportunities, for undergraduate students in particular. She wanted to be in a department that made her feel she belonged, and was energetic, serious and fun, all wrapped in one, in its approach to sharing information and experiences with each other and students. Dr. Carlson also had a clear picture of what she aspired to as a mentor—one just like her former professor, Dr. Doug Lund, UNK professor emeritus of biology who taught from 1962-1999. “Doug is the role model of the kind of teacher I want to be,” Dr. Carlson said with admiration. “I used to tell him that I was going to come back and take his job.” She wasn’t kidding.

Dr. Carlson is well on her way to achieving yet another serious goal. “As a geneticist, you’d think I’d be fulfilled having discovered a gene,” she laughs. “You know—been there, done that. But no, instead, now, I have this gene we discovered, but I don’t necessarily know the real ‘why’ of its existence. That bothered me.”

So, she rhetorically announced, “We need to figure out the function of this gene!” Thus commenced her current research project—and that of her students—officially categorized as “Characterization of the Homeostatic Function of OTK18.” With $1.25 million over five years from the National Institutes of Health through INBRE (Idea Network of Biomedical Research Excellence), Dr. Carlson and five student scholars over the last five years have conducted not only revealing but novel research in pursuit of answers to those questions in Dr. Calson’s scientific mind.

While the common fruit fly—scientific name Drosophila melanogaster—does not contain the OTK18 gene, it has a surprisingly similar system to that of a human. Working with the flies and cell lines, Dr. Carlson and her students are observing how the fly’s system is affected by the presence of this mysterious gene—under “normal” conditions. “We keep the gene functional to see what other genes this gene binds to, or turns off,” Dr. Carlson said. “Other times we get rid of the functionality of the gene to better understand its complicated molecular biology.” Amused by the paradox, she marvels, “Somehow, the fruit fly possesses the model genetic system for us to test these theories.”

In addition to Dr. Carlson’s OTK18 work, she and her students are studying the mystery of the aging process. Dr. Carlson’s Ph.D. work centered on aging. Some of her research questions included:

What genes are involved in the aging process?

Can aging be controlled by human intervention?

What controls the aging process now?

What genes are involved at milestone points of the aging process?

How and why do certain genes turn on and off?

A bit overwhelming, indeed, but Dr. Carlson, her students and 24,000 fruit flies aim to get the answers.

Some of the impressive numbers and strict procedures involved: 12,000 mated, female fruit flies in one cage; 12,000 more fruit flies in a second cage; change cage water every day; clean cages of dead flies every day; turn lights on and off at the same time every day; systematically rotate boxes. “Along the way,” Dr. Carlson said, “we pull out subsets and develop pathways and mechanisms to see what genes are changing from week to week, and what genes turn on and off each week.”

Through the tracking of specific patterns, the researchers are able to narrow down the genes involved with aging. “After all the fruit flies have died, we extract the RNA (ribonucleic acid) from 78 samples,” Dr. Carlson said. “Seven days a week. Everything same time, same way,” Dr. Carlson recites by rote. “At the beginning of each semester, I say to my students: ‘This is your lab. You don’t work for me, but with me.’”

According to Dr. Carlson, when they share what they do with colleagues and fellow students at conferences, the latter group cannot believe the amount of time and effort invested by the UNK team in this demanding research. Last Spring, one of Dr. Carlson’s students, Kylee Gardner, presented the team’s findings at the 49th Annual Drosophila Research Conference in San Diego. Gardner is now a second-year student, at Creighton University Medical College in the Occupational Therapy Program.

Gardner spoke on “Changes in Gene Expression Profiles Related to Mortality Over the Lifespan of Large, Caged Populations of Drosophila melanogaster.” Dr. Carlson said, “The poster sufficiently demonstrated that we are starting to understand the genetic regulation and mechanisms involved in the aging process. The implications are endless.”

Dr. Carlson said, “We—the students and I—couldn’t do it without each other. Or without my husband Darby (a molecular biologist and lecturer in the UNK biology department) who does his fair share of cage cleaning. Or without our wonderful building custodian, the late Art Hasbrouck, who voluntarily committed himself to turning on the lights for the fruit flies at the same time every day—can you believe that!” (Hasbrouck passed away suddenly, a few weeks before Gardner’s conference presentation.)

Obviously, it takes a certain kind of student to accomplish an undertaking as demanding as this one, and Dr. Carlson maintains that UNK is the precise institution at which such students can thrive. “UNK’s undergraduate research program offers a dream education for these students.” That is why Dr. Carlson feels so fulfilled, and so thrilled with her work, and life, at UNK. “The kind of students here, in a department like this, at a university that supports the undergraduate experience as earnestly as do the UNK faculty and administration—this is what makes the bottom line for me—that is, I am in my dream job right now.”