For decades, researchers sought ways to replace fossil fuels with wind, nuclear power and hydroelectric power. Each was never as efficient and cost-effective as coal and petroleum.

Each alternative had some fundamental obstacle that kept it from wide spread use.

Solar energy, for example, has always been more expensive to produce than coal-powered electricity. Scientists produced energy from sunlight for years, but the technology couldn’t compete in the marketplace—solar panels were just not efficient enough. 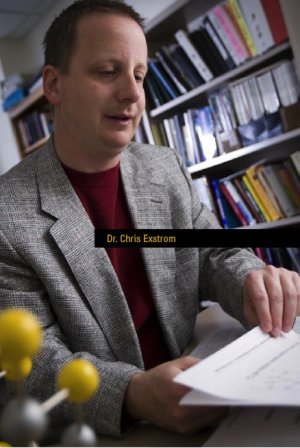 The project started in 1997 when Drs. Exstrom and Darveau received a call from UNL electrical engineers Rod Soukup and Natale Ianno, experts in producing thin-film materials.

The engineers had just devised a new method of producing thin films on solar cells using a hollow-cathode plasma jet deposition system. They needed help with the molecular structure and property analysis of the materials in the areas of light absorption, thickness and infrared absorption properties.

Could Drs. Exstrom and Darveau assist with this next step? They welcomed the opportunity.

The overall goal of the trans-Nebraska team was to boost the electrical output of solar cells so that they could convert about Harnessing the Power of the Sun Efficiently 15 percent of radiant energy received to electrical energy at a cost of $1.50 to $2.00 per watt.

In order to reach these energy and cost targets, single cell performance must be at least 20 percent, if not higher, than current solar cells.

Worldwide research indicated that the best way to do this is through solar cells that are very thin—thin materials have a better chance at absorbing and converting a greater percentage of light to electrical energy than thicker materials.

Thin films also promised to reduce material costs as they could more easily be deposited on an inexpensive, durable substrate material such as glass or even on flexible substrates such as mylar.

A Number of Possible Materials 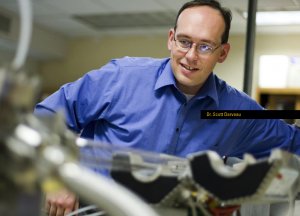 Since previous research with materials that were comparatively easy to use provided no breakthroughs, the Nebraska team knew they had to begin work with the hard stuff. The UNL-UNK partnership is, in fact, unique because it is experimenting with thin films that other labs are not using because of the difficulty in working with certain elements.

Boron, for example, is promising. Its use increased the bandwidth of light that the film can capture. It also has an extremely high melting point at more than 4,000 degrees.

This thought brought the team to the next step—the UNL researchers prepared thin films of copper, indium and boron that are layered or mixed together. The UNK researchers then added selenium by a method called physical vapor deposition in an appartus that was custom-built by Dr. Darveau. The resulting material is then analyzed in the UNK lab using Raman Spectro-scopy, and the UNL lab with Auger spectroscopy (to determine the elemental content), x-ray diffraction spectroscopy (to determine type of crystalline structure), and scanning electron microscopy (for visual images of the material).

The electrical and photovoltaic properties of each are studied at UNL while chemical structure analysis is conducted at UNK.

The team is now turning its attention to developing new films in the copper indium diselenide family that have potential to exceed current records in energy conversion efficiency and voltage generation.

How much more efficient are the new materials proving to be? The best thin film, copper-indium-gallium-diseleninde, has an energy conversion efficiency of 19.6 percent. The new film must be at least 25 percent more efficient at converting sunlight to energy to be competitive in the market.

The films being developed by UNL-UNK team may reach 25 percent efficiency, which would represent a major leap forward in the renewable energy field.

Additionally, using boron raises the maximum voltage that the film can generate—a critical factor if solar power will ever be efficient to generate hydrogen fuel.

In fact, that voltage and level of efficiency could be high enough to power hydrogen fuel cells, which are on the horizon for new automobile technology. The new approach may also improve the efficiency of solar cell arrays used to generate electricity where access to the power grid is not possible, such as satellites and remote locations.

The University of Nebraska researchers have received over $1 million from the Department of Energy and the Nebraska Research Initiative to continue their work. They are now in the process of refining the recipe for the film, and are looking for support that will pave the way to commercializing the technology as soon as possible.