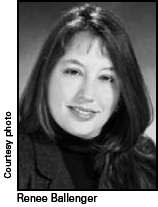 Renee Ballenger has been named director of Media Relations and Internal Communications.

Ballenger comes to UNK from Southern Utah University in Cedar City where she was director of News Services in the Office of Marketing and Public Relations for six years.While there, she was responsible for all public relations functions. She was the founding editor of SUU’s alumni magazine, the creator and editor of a semiannual community newspaper, and the producer of a weekly, live radio show that aired across parts of southern Utah. As the copywriter and editor of all major collateral and written representations of the institution, Ballenger was the media relations point person. Further, she managed a suite of Web pages for her office, and she created and coordinated the community speakers’ bureau program for the campus.

In addition, she co-wrote the integrated marketing plan for the campus and was a writer on the Committees for Northwest Standard One Accreditation, NCAA Accreditation Minority Equity and Institutional Effectiveness. She also was key in producing the annual commencement, which included six breakout convocation events for 1,200 graduates.

Renee began her career with an internship for a Nevada congresswoman in the Washington, D.C., office, as well as time as an account coordinator for a public relations agency in Reno, Nev. She spent four years in the casino resort marketing industry where she executed media, community and employee relations. She then managed her own public relations agency accounts from her home in Northern Nevada for seven years.

Her published works include major pieces in “Comstock’s Business Magazine of Northern Nevada,” “Reno Gazette- Journal’s Best Bets,” “Nevada Magazine,” the IWSOG Special Olympics International media and the greeting by U.S. President George H.W. Bush for the opening ceremony for the Utah Summer Games. Her interviewees include the likes of Senior Nevada Assemblyman Joe Dini, country-western stars Juice Newton and Mickey Gilley, and special Olympics athletes from all over the world.

In her new position at UNK, Ballenger said that she plans “…to remain flexible, proactive, and do as much one-on-one work as possible with individuals and groups.”

“It may sound corny,” she said, “but more and more studies on formal communications are agreeing with my philosophy of keeping the human element foremost in my communication goals.”

Ballenger added that she wants “… to work closely with marketing, enrollment management,Web services, HR and faculty groups to identify UNK topics as foundations for communications to audiences like legislators and public officials, national trade media, prospective students and their parents, alumni, residents within the region of the university, donors, and regional business citizens, like chambers of commerce, visitors authorities and agents of economic development.”

She said that she hopes “…to establish these collaborative relationships through personable visits.”

“I want to have conversations with those who know and love UNK, and find out what the story, if you will, of UNK, is,” she said. “What and Who does the UNK story look like? What does it feel like? What are each of their personal points of pride when they think of their UNK?”

Her latest passion, she said, is employee relations. She initiated a morale-oriented program in her latter months at SUU.

She said, “In my role as director of Internal Communications, the human element is even more critical. I’ve come to learn and strongly disagree with the idea that an organization is not responsible for its employees’ happiness. I believe that in the minds and hearts of most employees, respect is even more important, than say, opportunity.”

“I believe it should be SOP, indigenous in the culture of an organization, for its employees to know, every day, that they are valued,” she added, noting that she looks forward to building forthright relationships with her colleagues on-campus and off, all with the objective of success for the UNK community.