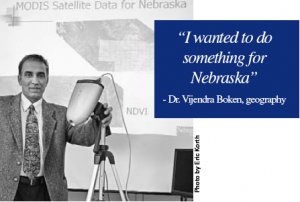 When it snows in eastern Nebraska, Dr. Vijendra Boken has more than a passing interest in how much and where it falls. Snowfall is a focus of his research into drought monitoring in the state he now calls home.

Dr. Boken, an assistant professor in geography and earth sciences, has been collecting data and recently presented “Monitoring Snow–Cover Using MODIS Satellite Data for predicting Drought Conditions in Nebraska” at the annual meeting of the American Water Resources Association in Albuquerque, N.M.

Collecting and analyzing satellite data from the U.S. Geological Survey Web site has been a large part of his research.

He is using the satellite data to derive a snow-based variable that could be used to improve predictions of corn yields in dryland farming in five eastern Nebraska counties—Dakota, Otoe, Lancaster, Nemaha and Thurston. He chose those counties because less than 20 percent of the corn planted in them is irrigated.

The timing of planting the crops is important, he said, and delays can lead to less production. “If the crops are not sown in an optimum window of time, the crop is easily affected,” he said.

“I have an interest in monitoring drought,” he said. “I did my Ph.D. in it.When I joined this university in August, I wanted to do something for Nebraska, and drought is a major concern here.”

A native of India, Dr. Boken earned his doctorate at the University of Manitoba in Canada. There he studied drought in the Canadian prairies, mainly in the Saskatchewan province.

Still in the early stages of his research, Dr. Boken plans to submit a proposal to do additional study on the topic. He said that he hopes to include student researchers in the future.

Dr. Boken said that as a teacher, research can help him explain things better: “Research and teaching are related, and they are both important.”