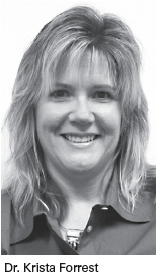 Last December, murder charges against Matt Livers were dropped in an Omaha courtroom. While no physical evidence implicated him, Livers’ confession made a compelling prosecution case.

Livers, who is mentally retarded, might be serving a prison sentence had not DNA and other evidence implicated two Wisconsin teenagers. But why would anyone confess to a crime he did not commit?

The answer to this question is the research focus of Dr. Krista Forrest, a UNK associate professor of psychology. She is not only acknowledged as one of the leading scholars in the field, but is called on by courts around the country to give expert testimony and train police in better interrogation techniques.

Livers was grilled for more than 18 hours, during which time he denied he killed his aunt and uncle more than 100 times. Police used many classic psychological tactics, including minimization, false evidence ploys (including a failed polygraph result), and a threat that they would seek the death penalty if he does not confess. Livers finally confessed. Given the fallibility of human beings, several circumstances in a criminal investigation can result in someone admitting to a crime that the person did not commit, Dr. Forrest said. These characteristics involve the suspect himself, the officer questioning him and the situation surrounding the interrogation.

Suspects with low IQs are particularly vulnerable to the pressures of police interrogation: They are less likely to understand the charges against them, and the consequences of professing guilt. They are also more likely to acquiesce or say ‘yes’ to multiple questions, inferring that they are agreeing with authorities when, in fact, they are either confused or trying to help.

Suspects with compliant or suggestible personalities and anxiety disorders may be hard-pressed to withstand an interrogation, too, she said. A suspect intensely worried or anxious about another matter may confess just to get out of the current situation or even begin to doubt his or her own memory.

“One case that stands out in my mind involved the interrogation of a father in an ICU unit near his dying child,” Dr. Forrest said. “This case was directly related to research that my colleagues Theresa Wadkins and Rick Miller, and I conducted in 2003 on how external stressors could increase the stress associated with an interrogation. We found that when participants were already stressed, they were more likely to falsely confess to an incident and that this effect was stronger for men than for women.”

Others may confess as a way to mediate a court sentence, specifically to take a plea or avoid the death penalty. “Sometimes, people confess to gain attention or notoriety, such as in the case of John Mark Karr,” Dr. Forrest said. “As you recall, he confessed to the death of Jon Benet Ramsey, yet physical evidence indicated that his description of the crime just wasn’t possible.” It is difficult to estimate of the frequency of false confessions because of a lack of precise records and related methodological difficulties, Dr. Forrest said. The number of false confessions that lead to false convictions is likewise virtually unresearched.

That’s changing, though. From statistical studies to jailhouse interviews, researchers like Dr. Forrest are beginning to develop a scientific understanding of false confessions. DNA testing, that has exonerated some convicts with virtually no doubt, is becoming an important force in attracting official attention on this issue.

“By using a research technique that allows us to differentiate participants who truly confess from their counterparts who falsely confess, we gain a better understanding of personal characteristics associated with confessing as well as how to improve police interrogations,” Dr. Forrest said. “Laboratory experiments are invaluable for systematically investigating variables associated with police interrogation. We can control situational facts and how information is presented by the interrogator.”

Another research area that has come from her original work is the examination of how mock jurors interpret police interrogation evidence. This work is important, Dr. Forrest said, because interrogation transcripts and even interrogation video recordings are becoming more commonplace in court, and more specifically, in the jury room.

Such research is needed to give law enforcement, prosecutors and defense attorneys new tools to better discern false from true statements, she said. Something that people like Livers, who just avoided going to prison, would appreciate.